WASHINGTON, June 21, 2017 - Explaining a new focus for U.S. energy policy, Interior Secretary Ryan Zinke on Tuesday said he and President Trump are going beyond “energy independence” to pursue “energy dominance.” And to achieve this new goal, “certainly fossil fuels and coal are going to be a part of our energy mix,” he said.

Addressing the U.S. Chamber of Commerce’s annual “Energy Strong” forum, the former Montana congressman and former Navy SEAL Team 6 commander, dismissed the possibility of using wind and solar power to replace the coal industry, which supplies “30 to 35 percent of our nation’s energy.” He also listed problems with wind and solar such as killing large numbers of birds and spoiling views with unsightly towers.

Zinke pointed out that unlike the last administration’s focus on what it called “the social cost of carbon,” Trump’s team recognizes that “there is a social cost of not having a job.”

Citing his overseas experience as a SEAL, Zinke included an environmental reason for boosting U.S. energy production: “Environmentally, I can guarantee you, it is better to produce energy here under reasonable regulation than watch it get produced overseas with no regulation.”

Declaring that “the war on coal is over,” Zinke said he and Trump believe in an all-of-the-above energy policy that doesn’t unfairly favor or disfavor any energy source. He made it clear that he is moving as quickly as possible to remove costly barriers to energy production.

Zinke cited examples of energy development that he said were being blocked by government delays, permitting hurdles, and fees and taxes. In the case of Alaska’s National Petroleum Reserve, he noted that Shell Oil Co. had invested $3.5 billion in good faith in an offshore lease, “and the U.S. Fish and Wildlife put them in a box and they ended up drilling a dry well.” He also pointed out, in explaining why he has issued a rule to end “compensatory mitigation,” that when Dominion Energy wanted to build a powerline, the company had to pay $90 million in compensatory mitigation in order to have their permit approved. “In many quarters, that’s called extortion,” he said.

Zinke called for using public/private partnerships to rebuild the nation’s neglected infrastructure which he said “is not an expense, it is an investment.” He said the challenge is to find the money to invest in needed infrastructure like new highways, transmission lines, and pipelines to move product to market. “When we don’t drill,” he said, “when we put 94 percent of our offshore holdings off limits, when we no longer harvest timber, it comes at a cost and that cost has been significant.”

He noted that not drilling includes environmental costs, such as the National Park Service’s $11.5 billion backlog in needed infrastructure and maintenance work. He pointed out that the very popular Land and Water Conservation Fund that funds such work in turn is funded by royalty payments from offshore drilling that he said have dropped by more than $15 billion, from the $18 billion for 2008 to last year’s $2.6 billion. 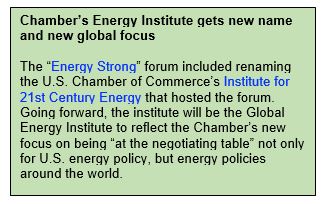 Also addressing Tuesday’s forum, Chamber of Commerce President Tom Donohue said that “In the last decade, fracking has allowed us to access hundreds of billions of dollars’ worth of shale oil and it has supported well over one million jobs in the United States.” Energy, he said, “has transformed the economy, it has transformed the country.”

Donohue and other forum speakers stressed that the potential benefits from increased energy production are being limited by some states’ opposition to fracking and other technological advances. Calling on the Chamber’s state and local affiliates “to help advance energy in their communities,” he warned that “the big energy fights to come will increasingly be waged at the local level.”

To reinforce the Chamber’s call to reduce state-level obstacles to energy development, the forum contrasted the energy advances achieved in Pennsylvania and West Virginia, versus the higher energy costs imposed on East Coast states as a result of New York state’s ban on fracking. 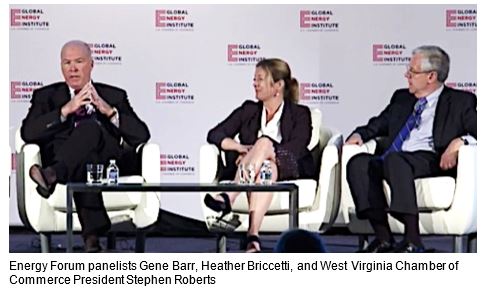 Gene Barr, president & CEO of the Pennsylvania Chamber of Commerce and Industry, said that the shale oil revolution triggered by new fracking technology has saved the average Pennsylvania household “about $1,200 per year in energy costs.” He said the state expects even greater benefits because Shell is investing $6 billion to build a cracker facility in western Pennsylvania “and from that, of course, we hope to draw many, many other industries around that.” A cracker is a plant that takes oil and gas and breaks it into smaller molecules.

Barr also said that when opposition groups failed in their attempts to ban fracking in Pennsylvania, they “fell back to the next line, which is blocking infrastructure.” So, he said continuing challenges include opposition to building needed natural gas pipelines. But he pointed to already highly visible benefits, such as new hospitals and new businesses opening in downtowns across the state. “Every town has seen the transformation from the new revenues” unleashed by Pennsylvania’s embrace of fracking, he said.

In contrast, Heather Briccetti, president & CEO of the Business Council of New York State, spoke for a state that has banned fracking.

“We have a prohibition on fracking in New York that is not based on science” she said. Having served on the New York commission charged with drafting fracking recommendations, she said that “unfortunately a lot of the rhetoric and the fearmongering has resulted in a political climate where not only is there no fracking in New York but you can’t even put a gas pipeline in New York that would bring natural gas from somewhere else.”

Briccetti added that her Council issued a report showing that in New York, “Almost a full third of an electric bill was state-added costs and fees” that in part support renewable energy.