WASHINGTON, June 28, 2017 - It was Thursday, June 22, in the Syngenta Viptera trial. The lawyers for the Kansas growers and Syngenta had finished delivering closing arguments and the jury had received instructions from the judge for how it should arrive at a verdict.

But the jury needed one more thing. In a note to the judge, they asked, “Can we have a calculator”?

Turns out they really needed it, as they determined that more than 7,000 Kansas corn growers who did not use Syngenta’s Agrisure Viptera or Duracade seeds should be compensated to the tune of $217.7 million. That was the full amount they requested for sales and reduced prices following China’s suspension of U.S. corn imports for about a year starting in November 2013 after China found traces of the MIR 162 trait in Viptera in U.S. corn.

It was the first decision in a series of class-action lawsuits tentatively scheduled to be heard in federal court. Another class action involving Minnesota growers is slated to begin next month in state court. All are “bellwether” cases designed to gauge the relative strengths and weaknesses of each side’s arguments and help them determine whether settlement would be a wiser course of action than continued litigation. The plaintiffs estimate that China’s rejection of U.S. corn caused losses to U.S. growers of as much as $5.77 billion.

The verdict in the Kansas case is unlikely to lead to a payday for the growers for some time, as Syngenta has vowed to appeal to the 10th Circuit Court of Appeals in Denver, and there’s no predicting how long that will take. 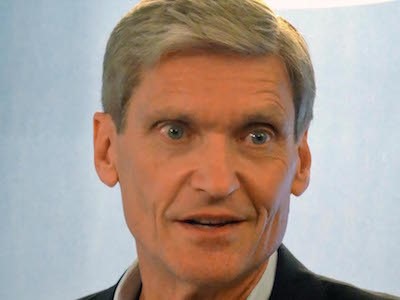 "Viptera is a great product and it’s being adopted by farmers in the U.S. and other parts of the world,” Syngenta CEO Erik Fyrwald emphasized during an interview with Agri-Pulse. He said the case is “without merit” because the drop in the price of corn was completely unrelated to the rejection of Viptera shipments. The salt-of-the-earth farmers who look at the price trends will realize that the price drop had nothing to do with Viptera, he said

“We will defend our case vigorously and over time, justice usually wins out,” Fyrwald said.

“Appeals can take years,” says Kristine Tidgren, assistant director of Iowa State’s Center for Agricultural Law and Taxation, on the CALT blog. “In other words, this litigation will not be over anytime soon. Nor will any checks soon be in the mail” for the farmers.

If upheld, however, the verdict could have a chilling effect on future commercialization of genetically modified seed, says an attorney who has followed the case closely.

Tom Redick, principal attorney at Global Environmental Ethics Counsel in Clayton, Mo., said that the verdict could cast “a big dark cloud” over products in the biotech pipeline, because seed developers will have to try to predict which markets have the potential to become “major markets.”

Asking the court to remove some issues from the jury’s consideration, Syngenta argued based on the trial record that a “reasonable jury” could not find that China was a key market for U.S. corn when Syngenta began selling Viptera for the 2011 planting season.

“China’s lack of historical imports . . . is undisputed,” the company said, citing testimony from U.S. Grains Council CEO Tom Sleight that between 1997 and 2010 “he was not aware of any U.S. exports of corn to China. Similarly, Nathan Fields, the director of biotechnology and crop inputs for the National Corn Growers Association, testified that prior to July 2011 the NCGA did not believe that China was a predictable importer of U.S. corn.”

Redick noted, however, that China “did become a major market very quickly.” USGC figures show China imported more than 5 million tons of U.S. corn in the 2011-2012 marketing year, which runs from September to August. After finding traces of Viptera’s MIR 162 trait in corn shipments, the country halted imports of U.S. corn starting in November 2013 and did not resume imports until December 2014.

The plaintiffs said in a brief filed during the trial that “China was a significant importer of both (Distillers Dried Grains) and whole corn in the year prior to commercialization and was expected to be an even greater importer in 2011 and 2012 – facts known to Syngenta. Syngenta was warned not to commercialize; it did so anyway.”

But for companies that already have to jump through numerous regulatory hoops to gain approval of new biotech products, the message sent by the verdict is problematic, Redick said.

“Is this court trying to tell us we have to try to predict major markets and wait for that approval? We’re not sure we have the foresight or the ability to do that,” says Redick, who has advised the American Soybean Association since 1998 on product liability. “I do think it presents a serious threat to investment.”

Biotech patents have a 20-year life from the date they’re filed, but once lab work and field trials are deducted, companies could have only a few years to make money off them, he said.

In the meantime, however, Syngenta’s appeal will move forward, and Lungstrum has ordered the parties to submit briefs by June 30 on how to consolidate some of the statewide classes.

The plaintiffs have asked the court to consolidate the statewide corn producer classes of Arkansas, Iowa, Missouri, and South Dakota in one trial, and Illinois and Nebraska in another trial. Lungstrum indicated in court that the next trial could be held in January or February, according to Bloomberg.