What does GOP healthcare bill mean for rural America?

WASHINGTON, June 28, 2017 - “Affordable access to quality health coverage is a high priority for all Americans, especially farmers and ranchers.”

GOP leaders have repeatedly pledged to repeal Obamacare, but unraveling the massive law with its mix of subsidies, regulations and new taxes is a heavy lift.

Failure to act isn’t an option because many rural areas will be left with no insurance coverage or only one provider. And now, the vote has been delayed for at least one more week.

“We’re still working toward getting at least 50 people in a comfortable place,” McConnell told reporters on Tuesday.

As a national farm group leader, Johnson says what he hears most about rural healthcare today is that health insurance has become both available and affordable thanks to Obamacare. While admitting that there are flaws with the current system, he’s deeply concerned that the GOP’s healthcare proposals could reverse the gains.

Johnson is particularly worried about steep cuts to federal Medicaid funding since rural residents, hospitals, and healthcare providers all are far more dependent on Medicaid than in urban areas. He adds that healthcare facilities “in many cases are the largest employers that remain in these rural communities.”

Speaking at a Democratic Forum last week, he also noted 79 rural hospitals have closed since 2010, “with over 80 percent of those located in states that opted out of Medicaid expansion. With another 673 hospitals at risk of closure, we need to increase, not decrease, support for rural hospitals.”

The 49-page Congressional Budget Office analysis released this week comparing the House and Senate proposals backs up Johnson’s concerns. It projects that the Senate proposal “would reduce the number of Americans with health insurance by 15 million in 2018 and by 22 million in 2026” compared to Obamacare. CBO estimates that the similar House bill would reduce coverage by 14 million next year and 23 million by 2026.

Acknowledging that rural America faces disproportionate challenges, the CBO report notes that under the GOP proposals, “Some sparsely populated areas might have no non-group insurance offered because the reductions in subsidies would lead fewer people to decide to purchase insurance – and markets with few purchasers are less profitable for insurers.” But the status quo isn’t much better. The Centers for Medicare & Medicaid Services (CMS) released a county-level map of 2018 projected Health Insurance Exchanges participation based on the known issuer participation public announcements through June 9, 2017. This map (below) shows that insurance options on the Exchanges continue to disappear. Plan options are down from last year and, in some areas, Americans will have no coverage options on the Exchanges. 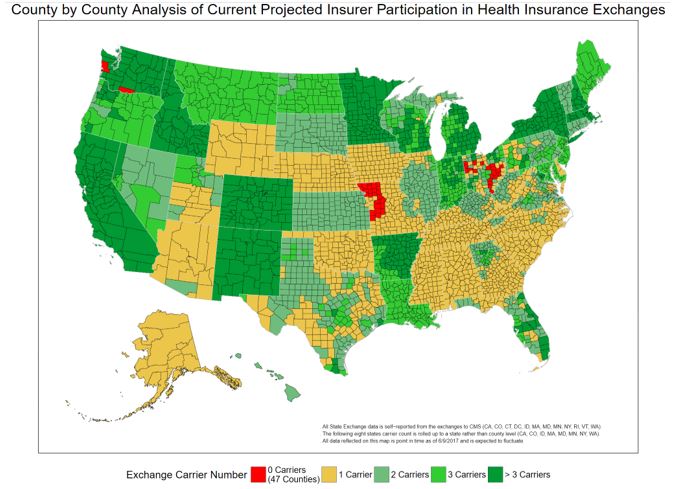 Despite CBO’s forecasts for reduced coverage nationwide, Sen. John Thune, R-S.D., promises that the BCRA will deliver “health care that is more affordable, patient-centered, and flexible than Obamacare.”

“Today’s Congressional Budget Office report confirms that the Senate health care bill will soon start lowering premiums for millions of Americans relative to the unsustainable premium increases under the broken Obamacare system,” Thune said Monday. “This legislation does away with the burdensome Obamacare mandates and taxes affecting the middle class and hardworking families, giving Americans the freedom to choose the health insurance that best fits their needs.”

Thune maintains the BCRA “stabilizes insurance markets collapsing under Obamacare, improves the affordability of health insurance, preserves care for those with pre-existing conditions, and ensures those on Medicaid don’t have the rug pulled out from under them.”

Introducing the GOP healthcare bill last week, Senate Majority Leader Mitch McConnell, R-Ky., told his colleagues that “we’ve watched Obamacare unravel before our very eyes with each passing year. Now it teeters on the edge of collapse, and we face a choice: allow the unsustainable Obamacare status quo to continue hurting more Americans, or take action to finally move forward.” 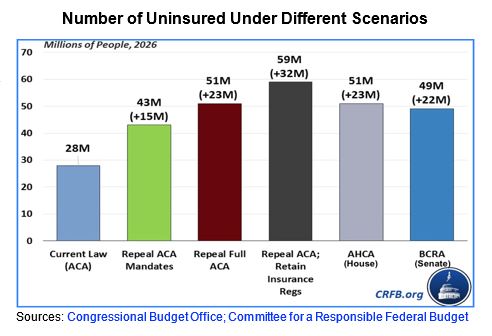 McConnell promised that the GOP replacement legislation will include “freeing Americans from Obamacare’s mandates which force them to buy insurance they don’t want, strengthening Medicaid for those who need it most, and preserving access to care for patients with pre-existing conditions.”

But the NFU is not alone in opposing the Republicans’ healthcare proposals.

Senate Democrats are expected to vote as a solid block against the Senate GOP’s 145-page Better Care Reconciliation Act unveiled last week and slightly modified Monday. If Democrats remain in united opposition, because the Senate is split 52-48, Republicans will be able to pass their healthcare bill only if no more than two GOP senators break ranks to vote with Democrats. Nine GOP senators (Susan Collins of Maine; Rand Paul of Kentucky; Ted Cruz of Texas; Shelley Moore Capito of West Virginia; Rob Portman of Ohio; Dean Heller of Nevada; Mike Lee of Utah; Jerry Moran of Kansas; and Ron Johnson of Wisconsin) have said they would vote against the bill in its current form.

“At a time of low commodity prices and drought in North Dakota, more headaches and higher health costs are the last thing farm and ranch families need,” Heitkamp said at the hearing. “Instead of making quality care more affordable, the Republican health care bill would rip health coverage from 30,000 North Dakotans and make coverage unaffordable for even more.

“By gutting Medicaid, the bill would likely force rural hospitals to close,” she added. “It would also let insurance companies charge older folks and those with pre-existing conditions even more for coverage. It’s outrageous that these decisions, which impact all of us, are being made by a handful of senators in secret, behind closed doors.”