Home » Chinese chicken may be on the way, despite legislative roadblock
News Politics Food Trade

Chinese chicken may be on the way, despite legislative roadblock

WASHINGTON, July 19, 2017 - USDA’s Food Safety and Inspection Service continues to move forward on lifting the U.S. ban on Chinese chicken, undaunted by legislation that some say is a threat to the efforts that have been wrapped into the U.S.-China Comprehensive Dialogue that concludes today.

A key agenda item in that conference in Washington is China’s agreement to lift its ban on U.S. beef. Another part of the deal is the U.S. promise to allow China to ship chicken here that was slaughtered, processed and cooked in China.

U.S. government and industry officials have said privately for years that the two are connected and that the failure of the U.S. to allow in Chinese chicken could disrupt the newly resumed exports of beef to China, as well as the continuing exports of pork and other commodities.

That’s why many in the U.S. ag sector expressed concern last week when the House Appropriations Committee passed a bill that included an amendment that appeared to throw a wrench into the deals.

The amendment was proposed by Democrat Rosa DeLauro of Connecticut, a longtime foe of USDA’s attempts to lift the ban on imports of Chinese chicken. The measure, included in the FY 2018 USDA spending bill, would require USDA to, among other things, “ensure that poultry plants in (China) from which poultry products will be exported to the United States maintain a level of public health protection that is equivalent to the level of such protection to which United States poultry plants adhere …”

DeLauro made her opposition clear back on June 16 when USDA submitted its proposed rule to approve Chinese chicken imports. 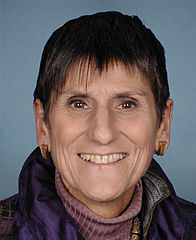 “Plain and simple, President Trump and the officials at USDA are prioritizing trade over the health and safety of American families,” she said. “The decision to allow China to export chicken to the United States is a slap in the face to American consumers and threatens our food supply. How can the USDA tell American families that China’s food safety system is equal to the United States when China has repeatedly faced serious challenges with weak enforcement of food safety laws and regulations – including problems specifically related to poultry products?”

Some U.S. food-safety groups claimed victory when the DeLauro amendment was approved. But U.S. government officials tell Agri-Pulse that the amendment won’t slow the USDA down, even if it is eventually signed into law, and that is far from a sure thing.

“We did our assessment,” one official told Agri-Pulse. “We did our audits. We do believe China has a system that is equivalent to the U.S. relative to public health protection.”

Split opinions on Chinese chicken imports
Chicken trade may hinge on US-China talks
Daybreak April 20: COVID-19 aid is on its way – maybe in May

To export poultry or other meat to the U.S., a country must show the USDA that its national food safety system is essentially as competent, or “equivalent,” to the system in the U.S. Secondly, the country must prove its system is as effective in practice as it is on paper. That’s why the USDA sends teams overseas to audit the inspection systems of other countries and their slaughterhouses and processors.

Another U.S. government official said that was the procedure followed by USDA in the case of China, and the DeLauro amendment is not applicable. When asked if the amendment – if it becomes law – would stop USDA from approving China to export chicken to the U.S., the source said, “No way!”

Some Hill aides argued that the DeLauro amendment would indeed stop USDA because, they claimed, the final audit conducted on China in 2015 deviated from the norm by only finding equivalence for two Chinese provinces – Shandong and Anhui – instead of the entire country.

“This (bill) language clarifies that the rule-making process has not been concluded, so equivalency status has not been accorded,” an aide said.

“The equivalency is not restricted to individual provinces,” a government source said, explaining that the reason that those two provinces were named in the audit was that they were home to slaughter facilities that are seeking certification to export chicken to the U.S.

“FSIS has concluded that the six components of (China’s) poultry inspection system, as designed and implemented, meet FSIS equivalence criteria,” the agency concluded in its final audit of China.