WASHINGTON, July 26, 2017 - Leaders of the Senate Agriculture Committee say they are eager to begin work on a new farm bill that will carry forward the basic structure of the 2014 law with some relatively minor modifications.

“This is not time for revolutionary change,” Chairman Pat Roberts, R-Kan., said at a committee hearing Tuesday on commodity programs and crop insurance. “Stability and predictability are the two key words.”

“We’re looking at fine-tuning and not anything dramatic,” the ranking Democrat on the committee, Michigan’s Debbie Stabenow, told reporters after the hearing.

Roberts has offered few clues as to his timetable for writing a new farm bill, but he said Tuesday that he wants to move a bill as soon as possible, a point he made during a brief exchange with Majority Leader Mitch McConnell, R-Ky., on Tuesday.

McConnell, who attended the hearing to introduce Mark Haney, the president of the Kentucky Farm Bureau, said he looked forward to “writing a new farm bill in 2018.” Roberts responded, “…17 would be a better number.” Roberts added that he would be “knocking on your door” when he has an agreement on the legislation. Roberts, standing beside Stabenow, told reporters after the hearing, “We think that sooner is better than later.”

Roberts and Stabenow also told reporters that the dairy and cotton provision included in the Senate’s fiscal 2017 Agriculture spending bill would provide important new funding streams for the farm bill. The provisions would each provide about $1 billion in 10 years for the commodities. “It would be easier for a farm bill from the budget standpoint,” said Roberts. Said Stabenow, “There was an immediate need, and it certainly helps us on the farm bill.”

In another recent and positive development for the farm bill, the chairman of the House Freedom Caucus seemed to indicate in an appearance at the National Press Club on Monday that his group would be satisfied if the legislation addressed work requirements in the Supplemental Nutrition Assistance Program.

Rep. Mark Meadows, R-N.C., was specifically asked whether the conservative group would demand that nutrition programs be removed from the farm bill. Meadows didn’t answer directly, emphasizing instead that his group had taken a position on the issue of SNAP work requirements, an area that House Agriculture Chairman Mike Conaway, R-Texas, has already pledged to address.

During Tuesday’s Senate hearing, farmers told the committee that crop insurance was essential and that they supported continuing the Agriculture Risk Coverage and Price Loss Coverage programs, although some growers want changes that could increase payments and the programs’ cost.

Farmers representing the National Corn Growers Association, American Soybean Association and the National Association of Wheat Growers said ARC should be tweaked to correct disparities in county yield data and to address the lower price levels.

ASA’s witness, Kevin Scott of Valley Springs, S.D., said ARC yields should be based on data from the Risk Management Agency wherever possible, rather than the National Agricultural Statistics Service, an idea that has support from NCGA and NAWG as well.

None of the groups were ready Tuesday to endorse specific changes in the ARC payment formula. Among the ideas that have been considered is extending the period, now five years, for calculating average yields and county revenue. NCGA board member Bruce Rohwer also said that increasing ARC floor prices would “better reflect the average cost of production.” 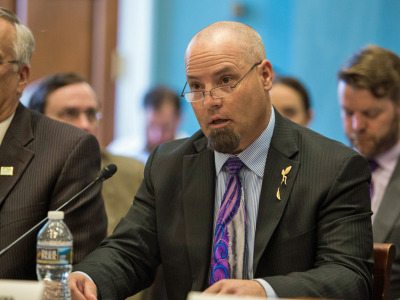 David Schemm, a Sharon Springs, Kan., farmer representing NAWG, suggested using sub-county areas in regions with large counties for the ARC-County option. “This approach could enable payments to be triggered at a more localized level and to be more reactive to the actual experience of producers,” he said. The ARC option for individual revenue coverage is too restrictive to provide adequate assistance, he said.

“ARC misses the mark because of the revenue calculations that are used,” he said. “The reality of PLC is that our farmers know that if national prices are below $3.95 per bushel, some help is on the way.”

There were fewer concerns raised about PLC, but rice producers want their reference price increased “to reflect rising production costs,” said Jennifer James, a Newport, Ark., grower testifying for the USA Rice Federation. “It is safe to say that the reason I am still in business today is because of the safety net provided by the 2014 farm bill and, specifically” PLC, she said in her written testimony.

The farmers also argued that cuts to crop insurance, through caps on premium subsidies or other new restrictions, would undermine the program and harm the farm economy.

Roberts sought to put their concerns to rest. “We are not going to cut crop insurance, period,” Roberts said. The chairman also noted that he had a personal commitment from President Trump not to cut the program, despite the proposals in his fiscal 2018 budget.

Crop insurance is the “most valuable part of the safety net,” said ASA’s Scott. He said “many family farms would hit” the proposed premium subsidy limits.

Rohwer said a survey of corn growers found that their top concerns by far were “potential cuts to insurance premium discounts, reduced coverage levels, and the price component” in revenue policies. He said crop insurance was “absolutely critical to the future of farming.”

Schemm, the Kansas wheat grower, said “crop insurance is the number-one priority of our producers.” However, he said the value of the coverage was being reduced for some growers because USDA’s Risk Management Agency counts starch quality losses, or “falling numbers,” against a farm’s Actual Production History.

Ron Rutledge, president and CEO of Farmers Mutual Hail Insurance Company of Iowa, said that over the past five years 54 percent of his company’s policy holders had not received any indemnities.

Some growers also cited regulatory issues that they say had added to their costs. Rohwer said that regulatory requirements for environmental safety data have increased the cost of registering new crop protection chemicals. “While the reduced cost of fertilizer has been a welcome relief to producers, the fact is, growers have yet to experience a measurable decline in critically important crop protection products,” Rohwer said in his written testimony.