WASHINGTON, August 2, 2017 - A bill to extend and expand a tax credit for technological innovations reducing carbon emissions has been re-introduced after its initial submission two years ago. Sens. Heidi Heitkamp, D-N.D., Sheldon Whitehouse, D-R.I. and Shelley Moore Capito, R-W.V. reintroduced S.B. 1285, the Coal with Carbon Capture and Sequestration Act, which would extend and expand the 45Q tax credit in the Internal Revenue Code.

The 45Q tax credit supports maintaining a place in the U.S. energy mix for existing resources like coal and natural gas by encouraging development and use of carbon capture, utilization and storage (CCUS) technologies—while spurring adoption of low-carbon technologies to transform carbon into useable products. Carbon sequestration involves carbon capture and long-term storage of carbon dioxide. According to the Energy Department (DOE), the process is done using carbon sinks to essentially trap the emissions either for permanent storage or for later use in energy production.

A wide cross-section of coal companies, utilities, environmental groups, and labor organizations support the bill, reinforcing a willingness from all sides to come together and seek bipartisan solutions. 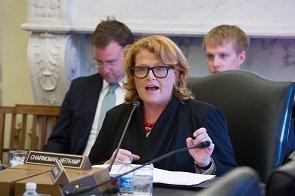 “Politics too often grind Congress to a standstill — and that’s deeply frustrating for someone who came to the U.S. Senate to get results for North Dakota,” said Heitkamp. “With unique support from both coal companies and environmental groups, we reintroduced a bipartisan bill (in July) that would accomplish my and Senator Whitehouse’s goal of reducing CO2 emissions — as well as my and Senator Capito’s priority of making coal cleaner and more competitive.”

Research is still required to make the process practical for use, but that research failed to receive strong backing from the Trump administration. The president has proposed a cut for CCUS research for 2018.