Heartland chalking up another year of economic survival

WASHINGTON, August 2, 2017 - The 2017 economic performance for agriculture in the American Heartland is being affected by uncertain and volatile commodity markets and weather, to be sure, but it may wrap up little changed from 2016 overall.

“The overall story is not all that much has changed,” Johansson believes, since USDA delivered its initial 2017 outlook in February. Back then, national net farm income was forecast up a little, and net cash income down a bit, from 2016. With August just starting, weather events still drive the market and USDA forecasting factors will be “pretty volatile” up to the Economic Research Service’s updated outlook on Aug. 30, he said.

In February, USDA had projected overall farm cash receipts, including specialty crops, nearly the same as 2016. Especially with continued mediocre grain prices and severe drought zapping production in much of the northern Great Plains, there is no reason to expect the totals to rise, he believes.

On the livestock side, Johansson notes that prices for hogs and some dairy products – butter and cheese – are somewhat stronger than were expected earlier. But feed prices, too, are higher than were projected, and drought may drive them higher, he said, so he does not expect a big change in livestock sector income either. 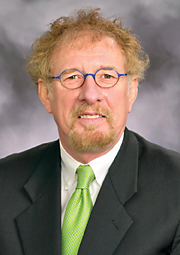 Creighton University’s two monthly regional economic indexes, the Rural Mainstreet Index, from surveys of bankers in 10 Midwest and Plains states, and the Mid-American Economy Report, from surveys of supply purchasers for companies in nine states of the Midwest, Plains and Rocky Mountains regions, find that rural economies in those regions are growing overall, but the farm sector continues to falter in many places.

“The agricultural sector is not doing well,” Goss said. “Agricultural commodity prices are not nearly what we need to see, if they even break even, for many of the farmers out there.”

The surveys also suggest that the Heartland’s farm economy is diverging from the manufacturing and energy sectors. Thus, the Mid-America index for July, which reflects the outlook for overall business growth, came in Tuesday at 56.1 (compared to a growth neutral of 50), and is the eighth straight month the index has remained above growth neutral. That score “indicates a healthy regional manufacturing economy, and points to solid growth for both manufacturing and non-manufacturing for the second half of 2017,” Goss said. Plus, the survey projects strong regional job growth, with its July score at 56.6, except that “manufacturing tied to agriculture” is restraining that index, he said.

On the other hand, the July score for the Rural Mainstreet Index, which reflects the views of bankers who finance agriculture, plunged to 40.7 for July, its lowest level since last November.

“Again, the weak sector is agriculture,” while manufacturing and energy, including oil and gas, wind energy and ethanol, all appear to be somewhat profitable, Goss said.

One result of extended years of poor farm profitability is a continued erosion of farmland values. There are exceptions: The Chicago and Dallas Federal Reserve Banks both reported stable to strengthening land prices for this year’s first quarter. But the Kansas City Federal Reserve reported land values in the western part of its district (Oklahoma, Colorado, Wyoming, western Kansas and Nebraska, and northern New Mexico), where non-irrigated cropland values had tumbled more than 20 percent since early 2015.

The Rural Mainstreet Index for farmland and ranchland prices, meanwhile, sank to 36.6 in July, its 44th straight month below growth-neutral 50. Goss said the values reflect long-term dismal profits, and many actual losses, for the Heartland’s farmers and ranchers. That, too, he said, is why the same survey’s farm equipment-sales index fell to 20.0 in July, from 26.2 in June.

Johansson expects farmland values and cash rents are likely to creep down a bit further this year overall, largely because they follow the direction of farm income, which is expected to remain near its four-year low this year.

“It’s kind of a mixed bag,” he said of land values. But, the USDA’s National Agricultural Statistics Service will report 2017 cash rents on Thursday, and he says further significant declines in rents will affect USDA’s projects for farming expenses and profits.