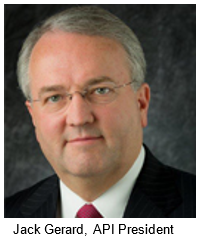 “The natural gas and oil industry across North America is united in our support for NAFTA and the significant consumer, economic and security benefits it generates,” said API President and CEO Jack Gerard. “As the energy flows between our countries continue to grow, it’s important to highlight the critical role NAFTA has played in facilitating cross-border trade and investment in energy. The positions we put forward today reinforce our commitment to the energy trade alliance under NAFTA, which supports jobs and manufacturing in energy, helps to make energy more affordable, and enhances our energy security.”

The joint position paper advocates for fully liberalized trade of crude oil, gas, liquefied natural gas (LNG) and all refined products across Mexico, the U.S. and Canada. API, AMEXHI and CAPP also support preserving tariff-free trade that they have enjoyed under NAFTA. The groups came out in support of co-existence clauses, which allow for investment protections and further liberalized trade.

“It is imperative to maintain fully reciprocal market access for Canadian oil and natural gas between Canada and the U.S., as well as enhance trade with Mexico,” said CAPP President and CEO Tim McMillan. “Since NAFTA’s inception in 1994 our three nations’ economies have become interconnected and integrated. The logic in supporting a free trade zone is more compelling today than ever before, which is reflected in our joint position to strengthen our deep trade relationship for all three countries.”

The position statement lauds NAFTA as a success story for energy integration. The paper urges leaders to do no harm in the renegotiation of the deal.

The interest groups hope that renegotiations will focus on updating NAFTA while preserving trade relationships.