WASHINGTON, August 30, 2017 - Experts from a wide range of academic disciplines have launched an ambitious search for the most probable breakthroughs in agricultural research that could produce dividends for humankind over the next dozen years.

Under the aegis of the National Academies of Science, Engineering and Medicine, “Science Breakthroughs 2030: a Strategy for Food and Agricultural Research,” is funded by a wide range of leading farm and food organizations.

The academies’ committee of scientists is chaired by Kansas State Agriculture Dean John Floros, a food science and technology professor, and Susan Wessler, genetics professor at California-Riverside and home secretary of the National Academy of Sciences (NAS). It’s charged with identifying the most serious challenges and the greatest opportunities facing food and agriculture for the coming decades – and recommending how research might deal with them. The committee’s final report is due for publication in the spring of 2018.

Speakers suggested that such breakthroughs might be in sharply improved methods of producing animal protein, through gains in photosynthesis of food grains and oilseeds, reduction of post-harvest food waste, and learning how to tailor diets to each consumer’s unique needs. But overshadowing all potential breakthroughs is whether the public will accept new technology.

Reliance on biotechnology and gene editing techniques known as CRISPR has enormous potential, said Ronnie Green, an animal scientist and the chancellor of the University of Nebraska-Lincoln. But it is “another example of advanced technology that will require a whole new level of communication,” he said. It “may be part of the solution,” he said, “but it is fraught with communication issues.”

For Dietram Scheufele, a science communication professor at University of Wisconsin-Madison, “a lot of it will be market acceptance. How well we are able to address some of these ‘moon shot’ issues” will depend on “how well on a continuing basis we are able to have conversation between the scientific community and consumers.” 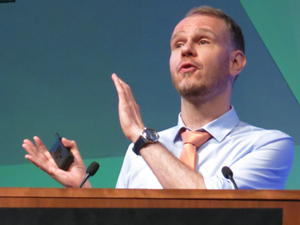 Jayson Lusk, chairman of agricultural economics at Purdue, urged greater attention to behavioral research in order to understand “what consumers and farmers are willing to buy and what policies politicians will support.” He asked rhetorically, “What is the economic value of new technology that farmers won’t buy or can’t sell? What is the economic value of dietary advice that consumers won’t follow or adopt? The answer to both questions is zero.”

Research must “start at the other end, asking what consumers want,” he said. “Perceived risks are lower when consumers can see the benefit and when they feel they have control. Giving consumers a reason – really any positive reason – why a food was genetically engineered, you can move consumers. You can turn aversion into acceptance.”

Lusk offered several examples of policies that may not line up with consumer desire. The public has not fully adopted the Dietary Guidelines for Americans, for instance, showing that “when we put out advice, people aren’t always going to respond.” Proposed advertising bans on junk food may lower the prices of unhealthy alternatives and thus encourage their consumption, he said. While it may be politically popular to prohibit the use of Supplemental Nutrition Assistance Program (SNAP) benefits for caloric beverages, he said, it likely would have “no effect on purchases and may decrease participation” because most beneficiaries have some other money to buy food. And, he added, research suggests that numeric calorie labels in restaurants have minimal effect.

Nebraska’s Green, who chaired the National Association for the Advancement of Animal Science (NAAAS) last year, said that societal concerns such as animal welfare must be addressed if animal protein production is to meet projected needs of a growing middle class in developing countries. He cited an estimate of increases in demand by 2030 of 63 percent in poultry and eggs, 55 percent for milk and 44 percent in beef and other ruminant meat “as well as a concurrent increase in fish consumption over that same time.”

One potential “moon shot” in animal research lies in more efficient utilization of nutrients, Green said. Noting that livestock competes for grains and oilseeds with food and biofuels use, he said, “going to different feedstuffs that are relatively indigestible to humans is a compelling one.” 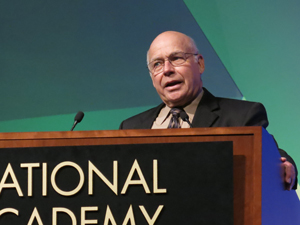 Another may come in improved plant photosynthesis. Donald Ort, University of Illinois plant science professor and head of a USDA Agricultural Research Service (ARS) photosynthesis project, believes “there is the capacity to support an increase in photosynthesis” but said the challenge is how to get closer to the maximum. “We could possibly get five times better,” said Floros, which would mean “less input with more output and other issues pertaining to environmental change.”

Pamela Starke-Reed, ARS deputy administrator for nutrition, food safety and quality utilization of agricultural products, sees potentially significant gains if research is able to develop more personalized nutrition “so we can tell each individual what’s best to eat” and then influence farm production decisions to better meet nutritional needs. “Many agricultural policies determine the types and amounts of foods available to the public,” she said. “There is an urgent need to identify those agricultural processes that can optimize public health.”

Daryl Lund, food engineering professor emeritus at Wisconsin-Madison, said food security would be enhanced “if we could save only one-fourth of the food currently lost” in processing, transportation and retailing and at the consumer level. “A 2 percent reduction in U.S. food waste is equivalent to enough calories to lift all Americans to a food sufficiency level,” he said. Recent breakthroughs in computing technology will help food manufacturers, he said, with lower-cost sensors becoming available to detect spoilage and reduce waste.