WASHINGTON, Oct. 4, 2017 – Commodity groups in Washington are preparing for what might be one of the more “in the weeds” conversations on the next farm bill as they seek to decide the source of data for future legislation.

The farm bill uses data from surveys conducted by the National Agricultural Statistics Service to administer the Agriculture Risk Coverage-County (ARC-CO) program. The yield and price from NASS surveys can decide which counties get a payment, which has been a major issue with the ARC-CO program. Producers sit frustrated as they look across county lines with similar production and weather values but a difference in payments due to figures from NASS surveys.

“NASS data in its entirety is very accurate, but when you break it down to a county-by-county basis, NASS data can sometimes not reflect what reality is,” Richard Wilkins, chairman of the American Soybean Association, said in an interview with Agri-Pulse.

The debate also has the attention of USDA’s top official, Ag Secretary Sonny Perdue. In August, he talked with producers and leaders of commodity groups at the Farm Progress Show in Decatur, Illinois, and one of the things he wanted to know was whether there was any preference for data from NASS or from the Risk Management Agency. 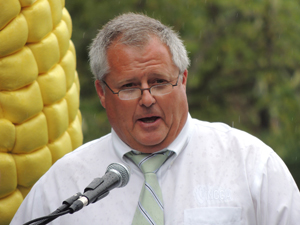 “It sounds like with the conversation that we just had with the Secretary that he is concerned about it, it is one of the top things on his list,” Chip Bowling, a former board member with the National Corn Growers Association, told Agri-Pulse shortly after huddling with Perdue. “He was going to consult with commodity groups like ours to try to fix the issues that we have and the concerns that we have, so I think something will change. We’ll have to wait and see what that is.”

Asked about his interest in the subject in September in Washington, Perdue didn’t shy away from expressing a desire to see credibility in the data used to administer farm programs.

“I think farmers want credibility and I’ve been asking questions about what data they would believe is the most appropriate there,” Perdue told reporters. “We think that RMA data has a lot of credibility because those are real numbers that people have to rely on for their insurance efforts, but we also want our farmers to participate in the surveys.”

Perdue didn’t rule out USDA making a recommendation to Congress on which data set he favors. He plans to consult with NASS and RMA officials “and determine the most credibility we can get.”

“There’s obviously some paranoia in the farm community always over NASS numbers and these reports that come out,” Perdue said, addressing consternation at weekly NASS reports that “show more bushels on hand than they thought. There’s some concern that these numbers are not exactly correct.” 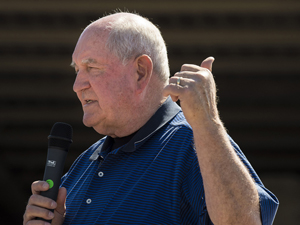 A number of farm organizations also say a switch to RMA data could be a beneficial change made in the next farm bill. Wilkins said he thinks ASA has “spoken up clear enough and loud enough that we need to use RMA data in some way, shape, or form.” He also suggested a potential switch to using a 10-year Olympic average to determine the ARC-CO revenue guarantee as a way to combat the last several years of consistently low prices.

David Schemm, president of the National Association of Wheat Growers, also suggested a switch to RMA data should be in the cards. While many wheat producers opted for the Price Loss Coverage program rather than ARC, Schemm said NAWG “wants to see RMA data used.”

“One thing that we’ve heard consistently from our producers is concern about the accuracy of the NASS data as well as counties that there’s just not sufficient people reporting their NASS data, so it becomes just a black hole,” Schemm told Agri-Pulse.

Since many wheat producers use PLC, Schemm noted a desire to bump the reference price up from the current $5.50 per bushel, saying it isn’t working and covers a “lower percentage of cost of coverage compared to other commodities.”

NCGA, however, isn’t going quite so far. In interviews with Agri-Pulse, the group’s leaders haven’t advocated a full switch to RMA data, saying refining NASS figures could still be in the cards.

“(Perdue) actually mentioned having a joint NASS-RMA yield of some sort,” NCGA President Kevin Skunes said, describing a brief chat with Perdue. “It appears that the numbers that may be more truthful year-round might be RMA, but NASS has a good handle on it too, and if they can get their lists updated and get enough farmers to turn in their NASS surveys at the end of the year, it’s a good system also.”

One concern in the debate has been that changing over to RMA data would have an impact on the farm bill's baseline spending, but a pair of Capitol Hill veterans tell Agri-Pulse they don't see it that way. One current staffer said "it could all wash out" because some estimates show higher payments with NASS data, some show RMA figures leading to higher payouts.

"I can see (the Congressional Budget Office) waving their hands at it and saying there's no change in cost," the staffer continued. "I think that is by far the most likely scenario."