WASHINGTON, Sept. 27, 2017 – Farmers from Maryland to Illinois are turning their soil into a kind of sponge and absorbing the benefits: Planting cover crops such as cereal rye and varieties of radish during harvest season can simultaneously enhance the soil and increase yield. New studies support what farmers and agronomists have been saying for years – that cover crops reduce nutrient runoff, improve soil health and, most important for farmers, increase yields.

While cover crops only occupy a small percentage of most states’ cropland, education and outreach efforts are starting to shift momentum, as the long-term benefits of healthier soil – increased organic matter and a biodiverse, below-ground ecosystem – are directly attributable to cover crops and should be a long-term part of a farmer’s operation, said University of Maryland Associate Research Scientist Ken Staver.

The problem, some skeptics say, is that adding cover crops can be expensive. That’s why there are new less-expensive “cocktails” out there that are less management-intensive and can still help reduce nitrogen loads. Mixes of cereal rye and pea crops, for instance, were found to be functionally diverse and to combine the strengths of each individual crop, while reducing farmer input costs, Penn State University’s Mitch Hunter said at a recent Sustainable Agriculture Research and Education conference at Delaware State University.

It is important, though, said Lauren Lurkins, Illinois Farm Bureau’s director of natural and environmental resources, to tailor a cover crop to the particular type of soil farmed to see the greatest benefits. Cereal rye often works best in the upper Midwest, where planting windows are shorter, whereas other varieties of legumes and radishes often work best in the South. 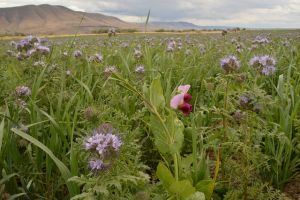 Kankakee, Illinois, farmer Jeff O’Connor likes cover crops for a multitude of reasons. In his county, where the soil is often arid and sandy, he plants cereal rye on unused acreage and harvests his own seed for use with the larger corn and soybean fields. This keeps his input costs manageable. O’Connor likes the return he has seen, even as commodity prices have put economic pressure on farmers.

A recent Iowa Learning Farms Field Day Evaluation report supports O’Connor’s conclusions. In seven of eight years studied, soybean yields were found to have improved as a result of cover crop use. And an annual report by the Sustainable Agriculture Research and Education Program, in conjunction with the Conservation Technology Information Center, argues strongly that cover crops boost yields and weed control. SARE said that for the fifth straight year, respondents reported yield increases in corn and soybeans after using cover crops. Some 88 percent of 2,012 farmers surveyed reported using cover crops. And 69 percent of respondents said that cover crops “always or sometimes” improved control of herbicide-resistant weeds in at least some of their fields.

Recent studies from the National Association of Conservation Districts conclude that erosion repair costs decreased by up to $16 per acre and yields increased by up to $76 per acre on four farms in Illinois and Missouri that utilized cover crops.

There are also important environmental reasons to plant cover crops. A balanced nitrogen cycle, upon which corn and soybean fields depend for increased yield and rich soil, can become unbalanced for farmers and river systems when disruptions in nitrate levels occur during the winter months if cover crops aren’t planted, said USDA plant physiologist and Iowa State University Professor Tom Kaspar.

A fallow winter field with added rainfall can create an increased risk of nitrate leaching, when increasingly mineralized forms of nitrogen can run into rivers, lakes and streams and pollute them, Kaspar said.

Kaspar and researchers at Iowa State have commissioned an ongoing, longitudinal study, begun in 2002, on the nitrogen-reduction capabilities of cover crops and found that they have reduced nitrogen watershed concentrations by 55 percent on average.

Recent studies show that a typical nitrogen loss for a farm that does not use cover crops is 25 to 30 pounds per acre, said Iowa State University Agriculture Professor Matt Helmers, but cover crops can cut those nitrogen losses in half.

The Environmental Protection Agency has helped states set guidelines on the amount of nitrogen and phosphorus runoff that should end up in area watersheds, Staver said. Nitrogen in water can cause excess algae growth, which starves oxygen and ages the water supply. High nitrate levels in drinking water also can cause health problems for infants. O’Connor measured the amount of nitrogen runoff produced in a three-month period on two farms – one with and one without cover crops. He found that on the farm that had cover crops, there was an 11.3 parts per billion average decrease in nitrogen concentrations.

Indiana farmer Kip Tom is an advocate of cover crops because of their potential to increase soil organic matter.

“We can’t farm our soils to death,” Tom said. “We need all the microorganisms there. Past farming practices have been ineffective. We have 50 percent less carbon in our soils today because of the way we have been managing them. It is important to try to understand a way to make cover crops a part of our field-process regimes.”

States such as Maryland that incentivize cover crops most heavily have seen their acreage rates increase. Maryland’s coverage rate is just over 50 percent, Staver said, while states such as Illinois and Iowa average around the 2 percent range. The Chesapeake Bay’s value as a tourist destination has spearheaded environmental efforts dedicated to reducing runoff since the 1990s, and the state recognized that there was potential in providing subsidies to farmers to plant cover crops. For this fiscal year, $22.5 million is earmarked for the project, and participating farmers will receive $75 per acre.

The state of Iowa’s Nutrient Reduction Strategy (nitrogen and phosphorus reduction plan) calls for 12.5 million acres of cover crop coverage, but Iowa has only achieved 5 percent of that goal, at roughly 625,000 acres. Education and outreach are seen as key factors in better future achievement, Helmers said. As of now, compliance with the strategy is voluntary but some specialty programs are offered for farmers for nutrient management. Certified crop advisers, supervised by experts like Monsanto’s Andrew Knepp, help farmers decide what cover crop and operational strategies will best meet their goals.