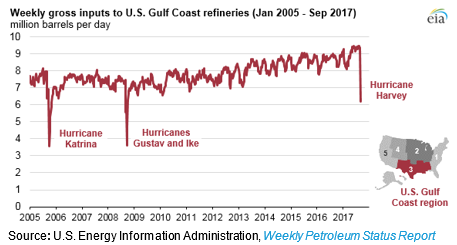 WASHINGTON, September 13, 2017 - Hurricane Harvey caused substantial disruptions to crude oil and petroleum product supply chains and increased petroleum product prices. For the week ending Sept. 1, 2017, gross inputs to refineries in the U.S. Gulf Coast fell by 3.2 million barrels per day (b/d), or 34 percent, from the previous week, the largest drop since Hurricanes Gustav and Ike in 2008. Weekly refinery utilization in the region fell from 96 percent to 63 percent, while other areas of the country remained virtually unchanged.

Refinery operations are largely dependent on a supply of crude oil and feedstocks, electricity, safe working conditions, workforce availability, and outlets for production. As a result of Hurricane Harvey, many refineries in the region either reduced runs or shut down.

Many crude oil and petroleum product pipelines were also affected by the hurricane, including the Colonial Pipeline system. Colonial connects 29 refineries and 267 distribution terminals and carries up to 2.5 million b/d of gasoline, diesel, and jet fuel from Houston to as far north as New York Harbor. Colonial typically operates at or near full capacity, but as a result of Hurricane Harvey and the decreased supply of petroleum products available to ship, Colonial Pipeline briefly curtailed operations and shipped products intermittently before resuming operations at reduced rates of flow on Sept. 6.

As supplies were disrupted, the East Coast drew down inventories of motor gasoline. East Coast total motor gasoline inventories in the week ending Sept. 1 fell by 2.2 million barrels, or 3.5 percent, compared with the previous week. Almost all of this drawdown occurred in the Lower Atlantic region, which stretches from Virginia to Florida. This weekly drop in inventories was smaller than the drop that occurred following a previous outage of the Colonial Pipeline in September 2016, when Lower Atlantic gasoline inventories fell by nearly 6 million barrels. 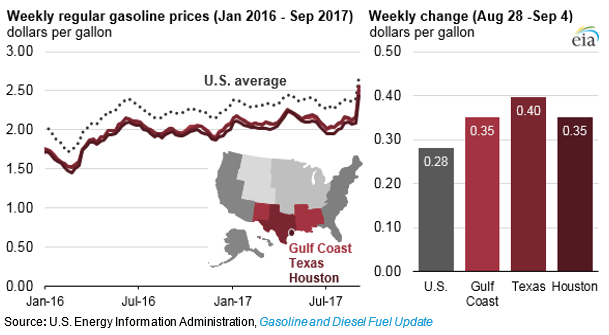 Disruptions caused by the hurricane also led to higher gasoline prices. The U.S. average regular retail gasoline price increased 28 cents per gallon (gal), from $2.40/gal on Aug. 28, to $2.68/gal on Sept. 4, based on weekly data collected in EIA’s Gasoline and Diesel Fuel Update.