New ways to spur funding for ag research and innovation?

WASHINGTON, Sept. 20 -- How to expand the sliver of public and private agricultural spending that goes to research and innovation?

American and international participants in agricultural research policy and funding gathered Tuesday at the National Press Club for a public forum, followed by a seminar through Wednesday, to pry out possible solutions to the U.S. and global stinginess toward agricultural research and development. The Farm Foundation, USDA's Economic Research Service and the global Organization for Economic Cooperation and Development (OECD) sponsored the events.

Participants discussed a bevy of dilemmas for ag R&D.

Nienke Beintema, reporting on science and technology indicators for the International Food Policy Research Institute, said most nations need to spend about 1 percent of their agricultural gross domestic product on R&D to produce strong growth long term, but only a few affluent countries do so, and the continent of Africa, on which IFPRI has recently focused, spends only 0.4 percent.

Philip Pardey, professor of science and technology policy at the University of Minnesota, reported that, from 1980 to 2011, a fourth of wealthy nations actually reduced overall public and private spending on ag R&D, as did more than a fourth of mid-income countries.

On the other hand, some mid-income countries, especially China and India, are spending more on research. Beintema noted that such countries, overall, funded 58 percent of world agricultural research in 2013, up from 44 percent in 2000.

Still, OECD, in an assessment called “Innovation, Agricultural Productivity and Sustainability in the United States,” estimated that less than 5 percent of total agricultural spending in the U.S. – public and private – goes toward research and development, said Ken Ash, who heads OECD’s Trade and Agriculture Directorate. 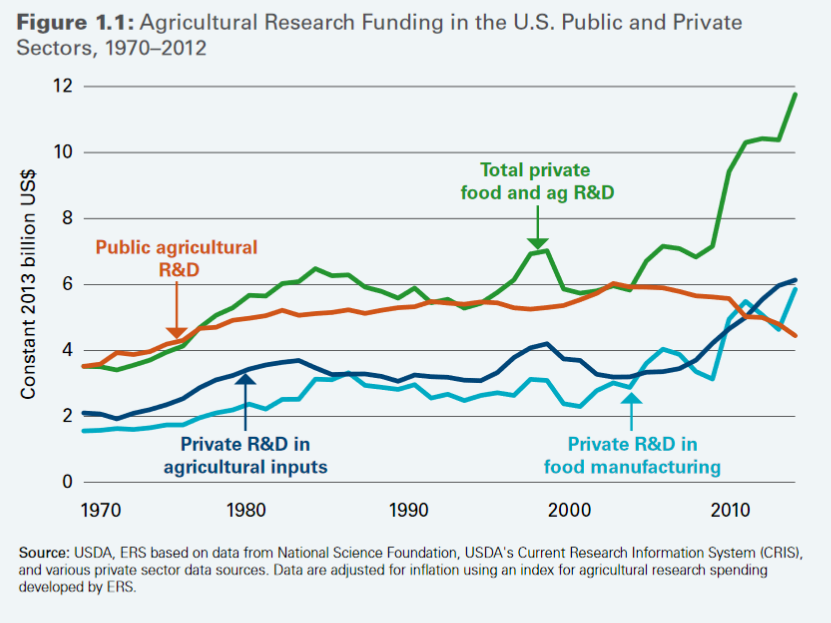 But, he said, “I don’t want to give the impression that it is only about spending more money.” He said that U.S. ag R&D needs more collaboration and cooperation among participants. Plus, he said that 45 percent of the value of exports comes from the services sector, so it is crucial to have effective, efficient services if you want to have competitive products.

Robert Thompson, former USDA assistant secretary for economics, sees big political hurdles to better public ag research funding. “Farm organizations, while they generally talk a good line about supporting agricultural research, when push comes to shove in the allocations of the budget, they protect their subsidies and income transfers first, and if there is any money left on the table it can be invested in ag research.” That means little cash for research.

Further, he sees “a lack of trust in science by a lot of the general public today. When it comes to agriculture, from the left we have the anti-GMO perspective and from the right (denial of) climate change,” and the polarized views don’t help make the case for research funding.