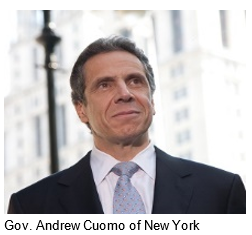 “Protecting and preserving our water resources is paramount to ensuring the health and wellbeing of New Yorkers and of all residents living within the Delaware River Basin,” Cuomo said. “With this resolution, the DRBC builds on New York's leadership to protect the environment and public health from hydraulic fracturing, while protecting this vital water source that millions of people depend on every day.”

“I have supported this resolution since I was a candidate for governor of Pennsylvania, and I am proud that we have worked collaboratively to move this process forward after almost a decade of work at the DRBC,” said Wolf.

Development of oil and gas using hydraulic fracturing in the Delaware River basin has been an issue since 2010, when the DRBC’s five commissioners voted unanimously to “postpone consideration of well-pad dockets until regulations are adopted.” This action effectively placed a de facto, temporary moratorium on drilling for natural gas in several Pennsylvania counties and parts of southern New York.

The American Petroleum Institute (API) disagreed with the DRBC decision, asking for “common-sense” regulations in a statement from its Pennsylvania office. API said the decision is in conflict with existing state regulations in Pennsylvania and surrounding states.

“Arbitrary limits on responsibly developing U.S. resources are bad public policy. If we do not produce energy, we will be more reliant on foreign sources and relinquish our ability to increase our security,” said API-PA Executive Director Stephanie Catarino Wissman. “The DRBC proposal could put upward pressure on energy costs for Pennsylvania families who also rely on energy development for millions of jobs.”

Since 2011, the DRBC and the signatory parties have undertaken extensive discussion and research efforts related to unconventional shale gas drilling which resulted in the resolution. Carney said the DRBC resolution is consistent with the Delaware River Basin Conservation Act, a bill introduced by Carney when he was representing Delaware in the U.S. House of Representatives and passed by Congress in 2016 as part of a larger national legislative package known as the Water Infrastructure Improvements for the Nation Act.

The DRBC’s revised draft rules, to be published no later than Nov. 30, will include prohibitions related to the production of natural gas using horizontal drilling and hydraulic fracturing within the Delaware River Basin. The revised draft regulations will also include provisions to ensure the safe and protective storage, treatment, disposal or discharge of hydraulic fracturing-related wastewater where permitted and provide for the regulation of inter-basin transfers of water and wastewater for purposes of natural gas development where permitted.

Pennsylvania and New York have both developed comprehensive programs to effectively manage waste and waste products produced as a result of high-volume hydraulic hydro-fracturing operations. These protections are an aspect of state programs to manage solid and hazardous wastes, as well as to treat wastes in accordance with the federal Clean Water Act and analogous state clean water programs.