The U.S. wind industry and electric-powered cars look to be the big losers among energy provisions in the House tax reform bill that was marked up this week, while the oil and gas industry appears to once again be in for some very nice breaks.

The bill, introduced by House Ways and Means Chairman Kevin Brady last week, would cut a major tax credit for the wind industry by a third, slashing the current 2.3 cent per kilowatt hour credit to 1.5 cents. Industry officials say the proposal would disrupt investment planning because producers have been preparing for a phase-out of the tax credit over five years, as Congress agreed to in a bipartisan 2015 agreement.

“This proposal reneges on the tax reform deal that was already agreed to, and would impose a retroactive tax hike on an entire industry,” Tom Kiernan, CEO of the American Wind Energy Association, said in a statement.

“The House proposal would pull the rug out from under 100,000 U.S. wind workers and 500 American factories, including some of the fastest growing jobs in the country. We expect members of the House and Senate to oppose any proposal that fails to honor that commitment, and we will fight hard to see that wind energy continues to work for America.” 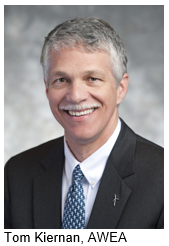 Sen. Chuck Grassley has also voiced his opposition. The agreement worked out late in 2015 “shouldn’t be re-opened,” the Republican said. “I'm working within the Senate Finance Committee to see that the commitment made to a multiyear phase-out remains intact.” Grassley represents the state of Iowa, which gets more than 35 percent of its generated electricity from wind.

During committee debate on the bill Tuesday, Rep. Earl Blumenauer, D-Ore., said that repealing the wind tax credit would put at risk billions of dollars in investment that were based on the tax incentive. “We’ve been working on this committee for years to help the wind energy business. It’s been successful … Why would we strip this out?”

The bill would also get rid of the permanent tax credit for solar and geothermal power, and eliminate federal tax credits of up to $7,500 each for electric vehicles.

“Taken together, these changes would increase pollution and undermine America’s leadership in energy innovation,” said Michelle Robinson, with the Union of Concerned Scientists. “This bill would set us back at a time when we need to build cleaner transportation and energy systems to fight climate change and create jobs that will last into the future. Ultimately, this tax plan is a bad deal for most Americans.”
Members of the National Biodiesel Board also expressed their concerns about the House bill.

“NBB members across the country are disappointed that this first draft of congressional tax reform legislation does not include an extension of the critical biodiesel tax incentives,” said Doug Whitehead, chief operating officer at the National Biodiesel Board.

“For decades, stable federal tax incentives for oil and gas have contributed to the world-class, conventional energy industry of today, and NBB encourages legislators to create a similarly stable tax framework for biodiesel and renewable diesel. As the process moves along, NBB stands ready to work with Congressional lawmakers to craft a robust, biodiesel tax incentive that will provide public benefits such as rural job creation, a diversified national fuel portfolio, and fewer toxic pollutants in the air.”

Meanwhile, large oil and gas companies would hold on to tax breaks that are estimated to be worth about $2 billion a year. These include a provision adopted early in the previous century that lets companies write off “intangible drilling costs” in the first year of exploration.

The industry says it needs the incentive because drilling is such a risky business, although new seismic testing techniques have greatly cut down on drilling dry holes. The American Petroleum Industry says the “treatment” is similar to the research deduction and small business expensing in other industries.

In a statement, Gerard said API stands ready to work with Congress and the Trump administration “to enact strong, pro-growth tax legislation to ensure that our industry remains a major driver of economic growth, investing billions each year in the U.S. economy and supporting over 10 million U.S. jobs.”