Livestock production has long been fingered as a significant contributor to climate change, fueling movements such as Meatless Mondays, the campaign to get Americans to cut back on meat consumption.

So, researchers with Virginia Tech and USDA’s Agricultural Research Service set out to figure out what would happen if all Americans quit eating any animal products. Greenhouse gas emissions would be reduced, but at the cost of adequate nutrition.

Agricultural carbon emissions would drop by 28 percent, and switching to vegan diets would increase overall production of food, mostly grains, by 23 percent, according to the study published in the Proceedings of the National Academy of Sciences. But, the researchers warned, Americans could be left without some key nutrients.

Domestic consumption of calcium, key fatty acids and vitamins A and B12 would be insufficient. Animal products are the only sources in the diet for the fatty acids and the B12, the study said.

"Overall, the removal of animals resulted in diets that are nonviable in the long or short term to support the nutritional needs of the U.S. population without nutrient supplementation," the authors write. 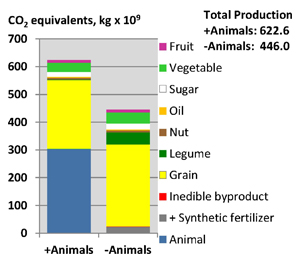 GHG emissions associated with food production in a system representative of the current United States and a modeled system in which animal-derived food inputs are eliminated. (Source)

Animal-derived foods currently provide 24 percent of the energy, 48 percent of the protein, 23 percent to 100 percent of the essential fatty acids, and 67 percent of essential amino acids that Americans consume. More than half of the food-derived calcium, vitamins A, B12 and choline, and riboflavin were from animal products.

The authors noted that vegetarian diets have been shown to lower the risk of heart disease but said it would be challenging for a large population to get all the nutrients it needs. Their bottomline: Recommendations to reduce greenhouse gas emissions should account for indirect impacts on nutrition and other issues.

"It is entirely possible to meet the nutrient requirements of individual humans with carefully crafted, unsupplemented plant-based rations, but this can be a challenge to achieve in practice for an entire population," the researchers said.