Perdue: USDA to be consultant to Congress on farm bill

Agriculture Secretary Sonny Perdue made clear Tuesday that he expects the congressional agriculture committees to continue their traditional lead role in developing next year’s farm bill with USDA taking on a supportive function.

“We are actually consultants to the agriculture committees as they desire” in shaping the 2018 farm and food legislative package, he told a National Press Club newsmaker luncheon. “We’ll be as hands-off or hands-on as they choose.”

Perdue’s remarks acknowledged the tradition that farm bills have been a congressional prerogative for at least the last half century. Successive administrations have not proposed major provisions for farm bills since the Johnson administration, although several have submitted detailed ideas that failed to gain much traction.

Perdue promised to give the committees “some broad principles that we think should be included. At their request, we’ll do a deep dive based on the facts and data that support those principles.” 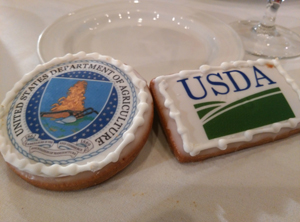 Cookies offered at the Press Club luncheon included the USDA logo and seal. A third option featured a bulldog in homage to Perdue's alma mater, the University of Georgia.

“We’re on track for a good farm bill,” he said. “The good news, it’s not going to be revolutionary, it’s going to be more evolutionary. I don’t think the 2018 farm bill will be a radical departure.”

However, he added, “It’s up to Congress to decide, and we stand ready to provide whatever counsel Congress may require. USDA is going to provide the background and resources” drawn from listening to producers in 30 states in the eight months Perdue has been in office. “We’ll be providing them what we believe are the basic bedrock principles of a good farm bill. We’ve heard from farmers who have the best ideas of what works from previous farm bills and what doesn’t work.”

A good farm bill, Perdue added, provides a good “safety net.” He said a circus provides a good metaphor for a producer safety net. “If the net is put right under the wire, there’s not much thrill there. If it’s right on the concrete ground you can get really hurt.” The task is finding the right level of the safety net to protect farmers from losing their operations if disaster strikes, he said.