Record fossil fuel output expected over the next two years

Natural gas leads an upward trend in fossil fuel production that will continue to break records through 2019, according to Energy Information Administration (EIA) forecasts. The Trump administration expects U.S. fossil fuel production will reach a new high of 73 quadrillion British thermal units (Btu) in 2018, an amount capable of sustaining worldwide industrial sector energy use for the year. Production is on track to set another record in 2019 at 75 quadrillion Btu.

The projection accounts for all fossil fuels: dry natural gas, crude oil, coal and hydrocarbon gas liquids (HGL). However, natural gas appears to lead the increase in overall production. EIA attributes the heightened production levels to hydraulic fracturing in tight rock formations that is allowing for a growing harvest of fuels. While coal production continues to shrink, expanding production of natural gas, crude and HGL should make up for those losses.

On a heat-content basis, dry natural gas accounted for the largest share of fossil fuel production in 2017 at 41 percent. Crude oil accounted for 29 percent, coal for 23 percent, and HGL for the remaining 7 percent of the total. As recently as 2010, coal was the leading source of U.S. fossil fuel production, but it was surpassed by dry natural gas in 2011 and by crude oil in 2015. 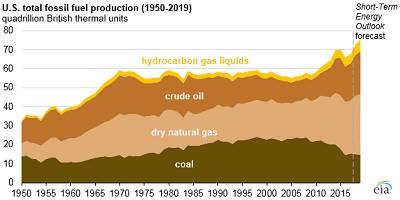 Increased production from the Permian region in Texas and New Mexico accounts for most of the projected increase in the U.S. total. EIA also expects a significant contribution to crude oil production growth from the Federal Gulf of Mexico, as seven new oil-producing projects are slated to come online by the end of 2019.