After decades of division over government regulation of the dairy industry, bottlers and producers have united on a proposal to change the way that milk is priced.

Processors have long chafed at the federal milk marketing orders that set prices for milk based on the products it is used for, and then pool the receipts to pay producers according to an average of the various prices. Producers have fiercely protected the system for decades.

Producers also fought off proposals by processors to allow them to start buying fluid milk through forward contracts with farmers.

But now, the International Dairy Foods Association and National Milk Producers Federation are jointly asking Congress to include provisions in a new farm bill that would modify the formula that determines the floor price for fluid milk based on fluctuations in prices for milk that goes into butter and cheese.

Under the current system, the price for fluid milk (Class I) is set as a premium over the price paid for either Class III (milk sold for cheese) or Class IV (butter and milk powder), whichever is higher. The problem for processors is that with the current formula, they have to hedge the cost of their fluid milk supplies based on Class III and Class IV futures, not knowing for sure which is going to be the price mover. That has meant uncertainty, increased hedging costs and significant price risk for processors.

The IDFA-NMPF deal would still prevent bottlers from forward contracting for fluid milk. National Milk argues that forward contracting could drive down the prices paid to producers. But the groups have agreed to a tweak in the formula that has been in place since 2000: The price for fluid milk will be set at 74 cents per hundredweight over an average of the Class III and Class IV prices, not the highest of the two.

It sounds like a minor change, but experts say it will go a long way toward eliminating price spikes and providing processors with predictability. (The 74-cent premium is based on the historic average of what producers have been receiving for fluid milk over the cheese and butter prices.)

John Newton, an economist with the American Farm Bureau Federation, who has analyzed the plan, said that if the proposed new system had been in effect since 2000, it would have significantly stabilized prices, eliminating both the highs and lows, with no long-term loss to producers. “Over time, it’s a wash” for producers, said Newton.

For the Kroger Co., one of the nation’s largest supermarket chains and one which also processes its own milk, the new pricing system will make it easier to develop and market new protein drinks that use fresh milk. The unpredictability of milk costs to manufacturers under the existing system makes it challenging for companies to invest in products whose prices have to be relatively stable, said Mike Brown, director of Kroger’s dairy supply chain.

“It’s really on that new product development where we really see the advantage,” he said. Those new products, in turn, will benefit farmers by increasing market demand, he said. 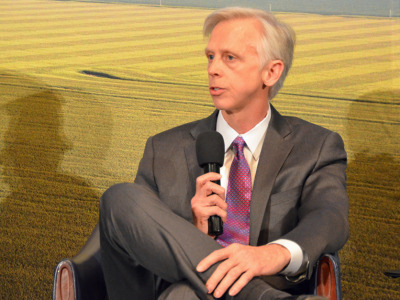 Jim Mulhern, president and CEO of National Milk, said the agreement marked the first time the producers and processors had come together on reforms to the pricing system. The agreement grew out of discussions that started in 2016 on reforms to farm bill policy. IDFA got behind improving producers’ Margin Protection Program. National Milk agreed to consider changes to the Class I pricing formula.

He added, “I’ve been working on farm bills since 1981 … This is the first time in my career that we have had that level of support and agreement.”