The biofuels and fossil fuels industries are aggressively jockeying for position in the run-up to 2022 when the U.S. EPA will have broad discretion to re-write the rules for the Renewable Fuel Standard (RFS), which mandates the use of ethanol, biodiesel and other biofuels in the nation’s transportation fuel supply.

But biofuels could hold the “trump” card.

On Monday, opposition to the RFS ratcheted up. The United Steelworkers and Philadelphia Energy Solutions (PES), a major East Coast refinery complex that blames its recent bankruptcy filing on the RFS, jointly charged the Renewable Fuels Association (RFA) with making “false and misleading statements.” PES said it sees no justification for defending what it calls “the job-destroying financial burdens imposed on independent merchant refiners by the Renewable Identification Numbers (RINs) compliance mechanism under the Renewable Fuel Standard.”

RFA president and CEO Bob Dinneen responded Tuesday at RFA’s 23rd annual National Ethanol Conference in San Antonio that ethanol is well positioned to win the RFS fight. “The President of the United States supports ethanol, supports the Renewable Fuel Standard, and has expressed his support for reducing the regulatory burden on our industry,” he told reporters. Dinneen added that Trump’s support is key because “this administration in particular begins and ends at the top and the president of the United States has been unambiguous.”

Speaking to some 1,000 conference attendees from across the U.S. and overseas, Dinneen rejected calls for “reforming” the RFS. Reacting to reform proposals championed by Texas GOP Sens. John Cornyn and Ted Cruz, Dinneen warned that despite ethanol’s successes and growing strength, “the forces that would have us go backward, the foolish fossil fuel fanatics, are gathering strength too.” He called for rejecting the fossil fuel industry’s continuing attempts “to claw back lost market share.”

Dinneen noted that despite being under attack, ethanol scored major achievements in 2017, including:

Despite such successes, Dinneen warned that attacks on biofuels continue.

“Buoyed by sympathizers in the administration and their champions on Capitol Hill, fueled by funding we can only imagine, and willing to distort reality to fit their agenda, efforts to undermine the growth in renewable fuels, repeal or render toothless the Renewable Fuel Standard, and deny consumers choice at the pump are gaining momentum,” he said.

To counter attacks on the RFS coming even from within the Trump administration, Dinneen told Agri-Pulse that Agriculture Secretary Sonny Perdue “could benefit from hewing a little closer to the boss’s positions with respect to RFS and ethanol because the President has been overwhelmingly supportive and his remarks have been unambiguous in support of growing the market, removing regulatory barriers.”

Referring to RFA’s push for an EPA waiver to authorize year-round use of E15 (a 15 percent ethanol blend), Dinneen said “EPA Administrator (Scott) Pruitt needs to take a lead from the boss and provide volatility parity for E10 and E15, allowing consumers to make the choice of which is the best fuel for their vehicle and their pocketbook.”

Responding to reports that Perdue told biofuels leaders last week that first they need to support the administration more vocally if they want more support for biofuels, Dinneen said “I think this industry has been overwhelmingly supportive of President Trump. We agree completely with his regulatory agenda. We agree completely with his vision for growing the ethanol industry and protecting the RFS. And we certainly agree with his America First trade policies that will stimulate jobs and create opportunities. So, it’s hard for me to see where the ethanol industry could be more supportive.”

Dinneen called Trump “the stalwart for ethanol generally and the RFS specifically we believed he would be.” But just to make sure that performance lives up to promise, Dinneen urged ethanol supporters to flood the White House with RFA postcards asking Trump to “Boost competition and consumer choice by eliminating burdensome restrictions on E15!” 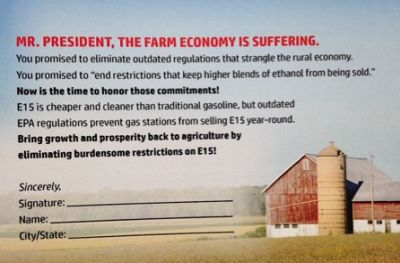 For the text of Bob Dinneen's speech, click here