Home » China’s government spurns US sorghum, but its feed mills are hungry for the grain
News Politics Trade

China’s government spurns US sorghum, but its feed mills are hungry for the grain

China made it clear this month it wants to block imports of U.S. sorghum, but the country’s new dumping investigation may actually be boosting demand from its feed mills for the U.S. grain.

The government's Feb. 4 announcement appears to have bolstered what is already shaping up to be a strong year in sorghum trade between the two countries instead of sending Chinese customers running from U.S. supplies.

“The (Chinese) customers – as was proven this week again – like our product,” National Sorghum Producers CEO Tim Lust told Agri-Pulse in an interview. “I think that the main thing about the market reaction was just the uncertainty of what this meant. Our longstanding relationship with our customers in China has been strong and remains strong.”

That uncertainty appeared only to be a factor at U.S. elevators and is not shared by Chinese buyers who need to feed the world’s largest swine-producing country.

When China announced that it would investigate suspicions that the U.S. is dumping subsidized sorghum onto its market, domestic prices for the grain began dropping.

“On Friday, local county prices at elevators for sorghum had been $4.05 per bushel,” said USDA Trade Counsel Jason Hafemeister last week during a presentation he gave in Orlando, Fla. “On Monday that price fell to $3.10.”

Officials at USDA and the Office of the U.S. Trade Representative interpreted China’s decision to launch the investigation as retaliation for recent U.S. actions against Chinese aluminum, steel, washing machines and other goods. Some saw the investigation as part of China’s continuing effort to block grain imports and reduce massive domestic corn stockpiles.

Whatever the reason, the announcement of the investigation may actually be spurring more trade, as evidenced by the export sales report. During the week ended Feb. 8 China purchased 116,200 metric tons of U.S. sorghum. That's about 92 percent of total U.S. sales for the week with the rest purchased by Japan.

Chinese imports of U.S. sorghum exploded in the 2013-14 marketing year after the government there began to crack down on U.S. corn shipments. It was in November of 2013 that China began rejecting U.S. corn, claiming U.S. shipments contained a genetically modified strain of Syngenta’s Viptera corn, also known as MIR 162. The biotech corn had been approved in the U.S., EU, Japan and other countries, but not China at the time.

US sorghum exports to China continue to decline, but remain strong
US grain groups relieved after China lifts sorghum tariff
US rice mills want China to hurry up and seal the deal

Chinese feed mills quickly realized that sorghum could be used as a replacement for corn and began buying as much as the U.S. could supply. The mills imported 252 million bushels of U.S. sorghum in the 2013-14 marketing year, a more than 1,000 percent increase from the previous year, according to USDA data. In 2014-15 China imported even more – about 354 million bushels.

Since then, U.S. sorghum exports declined as China began auctioning off massive stockpiles of corn that had accumulated thanks to years of steep Chinese subsidies. Despite the decline, U.S. sorghum export sales to China remained relatively strong. One of the likely reasons is that China is having a difficult time digging itself out of all of the corn it amassed. U.S. analysts say the quality of much of those supplies has deteriorated in poor storage conditions and many of the silos are poorly positioned in the southeast region of the country (the bulk of China’s hog industry and feed mills are in the northeast).

And now, just as China is threatening U.S. exports, the U.S. producers seem to be having a very good year in sales to China, according to new analysis from USDA’s Foreign Agricultural Service. 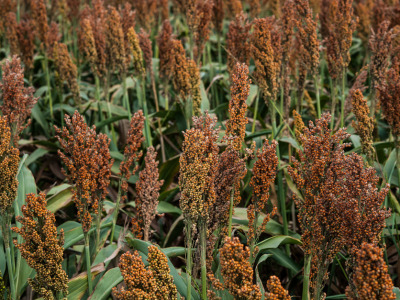 “Current feed market conditions in China mirror the circumstances which set off imports of U.S. sorghum to China in (the 2013-14 marketing year),” the FAS report concludes. Chinese feed mills, the analysts say, “are snapping up inventories ahead of the New Year and Spring Festival holidays.”

The Chinese dumping and countervailing investigation into U.S. sorghum introduces a new risk factor for both Chinese importers and U.S. exporters, but the probe is still in its infancy and not likely to deter trade for several months. That makes sorghum a safer investment than corn and other grains, some analysts say.

The FAS analysis stresses that “at this time, U.S. imported sorghum supplies are competitively priced relative to imported (distiller’s grains) and barley and have lower commercial risks than imported corn. Chinese buyers seek U.S. sorghum for its consistency and reliable quality characteristics.”

Meanwhile, the National Sorghum Producers are stressing their strong ties to their Chinese customers while at the same time preparing to defend their trade.

“Our partners and stakeholders across the industry are working closely together to demonstrate that U.S. sorghum is not dumped into China, it is not unfairly subsidized and is not injuring China,” the group said in a statement released last week. “Meanwhile, it is important our producers know trade with China and other countries continues.”