Dreading more drought in Southwestern US

The Southwestern United States is bracing for the daunting reality of more drought this year.

According to the National Oceanic and Atmospheric Administration’s recently released U.S. Seasonal Drought Outlook, persisting and additional drought is forecast through June in California, Nevada, Utah and Colorado. The impact is forecast to be especially strong in Arizona and New Mexico, both of which are already almost entirely in the grip of drought.

In California, the biggest agricultural state in the U.S., there appears to be little respite from the dry conditions that have afflicted the state for years. As of April 3, abnormal dryness or drought was affecting nearly 30 million people in the Golden State, or about 80 percent of the state’s population, according to the U.S. Drought Monitor.

Similar conditions are prevalent in much of the Southwest.

“Drought conditions in Arizona are pretty rough as we enter into our normally dry spring,” said Michael Crimmins of the University of Arizona’s Department of Soil, Water, and Environmental Science. “These are the worst conditions for this region since spring of 2014.”

He said that all of Arizona is impacted by some level of drought and about the half of the state is already at the level of Extreme Drought (D3) on the latest drought monitor.

“Snowpack levels in Arizona are less than 25 percent of average for this time of year, pretty much zero in many locations, and we are bracing for a busy fire season,” Crimmins said. “Rangelands are poor across much of the state, especially central and western Arizona, which is impacting livestock operations.”

Crimmins also expressed concern for the future of the Colorado River watershed, which is experiencing one of its driest winters ever.

“All eyes are on the Colorado River as well with projected streamflows into Lake Powell and Lake Mead at near record low levels,” he said. “This ups the odds of a shortage declaration on the river in the next couple of years, which would impact agricultural water deliveries to central Arizona.” 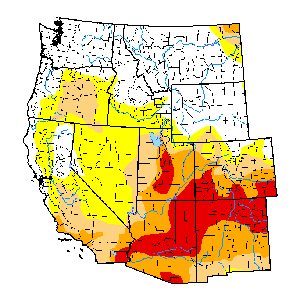 The most recently-released drought monitor from April 3 shows much of the Southwest experiencing drought.

The USDA has already designated most of Arizona as a primary natural disaster area as a result of losses and damages from the drought. Farmers and ranchers in Arizona, along with a handful of counties in neighboring Southwestern states, are already qualifying for natural disaster assistance.

Here is a breakdown of current drought summaries for the Southwestern states as of April 3, according to the National Integrated Drought Information System (NIDIS):

Paul Gutierrez, professor and extension specialist for New Mexico State University, has been involved with livestock economics in the state for about 30 years and is no stranger to drought in the “Land of Enchantment.”

“In New Mexico, we’re quite accustomed to droughts,” he said. “Without the snowpack in southern Colorado and northern New Mexico, we’re not expecting any kind of runoff to recharge the reservoirs, so that’s definitely going to be a factor.”

He said that everyone is anticipating a lot less surface water, so they’ll need to use more well water for irrigation.

“It definitely makes the cost of farming go up significantly,” Gutierrez said. “The quality isn’t as good either and it impacts the yields of some of your specialty crops.”

The beginning of 2018 was promising for New Mexico in terms of rainfall and forage production, he said, so many ranchers are now trying to extend the dry grass and feed that they already have.

“It’s been such a long time since any measurable amount of precipitation in some areas of the state, so of course that exacerbates things,” he said. “In the desert, timing is everything when it comes to rain. I think just in terms of previous droughts, the prolonged period between the last significant rainfall in some areas is really an issue.”

But with drought comes scarcity, and with scarcity comes demand. The last drought was followed by record cattle prices, Gutierrez said.

“The old saying is, ‘You can’t feed your way out of a drought,’ but many producers did because the cattle market was so strong,” he said. “So everybody is really watching the cattle market to see what kinds of culling decisions they want to make.”

During the last drought, many ranchers thinned their herds due to lack of feed or increased feed costs, but they may have regretted it.

“When the cattle market was at record highs, everybody was like, ‘Whoa, I might need to get back in this game!’”

He said that the current market “isn’t terrible,” and that international demand for beef plays a large role. Time will tell if Southwestern cattlemen decide to build the herd again this year.

“I think the whole production and marketing equation has just gotten more and more complicated for many producers because we’re operating in such an uncertain marketing environment,” he added. “The traditional cattle cycles as we used to know them just don’t exist that way anymore.”

That can certainly be said for many agricultural industries adapting to abnormal weather patterns, not just the beef industry.