Brazil is preparing to challenge the U.S. again at the World Trade Organization over cotton subsidies, Agriculture Minister Blairo Maggi said in an interview.

“There’s going to be another (WTO challenge),” said Maggi, who sat down to talk with Agri-Pulse in his eighth-floor office at the Brazilian Agriculture Ministry in the country’s capital city of Brasilia.

That could be bad news for U.S. cotton farmers, who saw much of their government safety net torn down more than a decade ago after Brazil won a long and complicated WTO dispute. Brazil successfully argued then that the USDA-run programs gave U.S. farmers and exporters an unfair advantage on the international market.

Now Brazil is getting ready to make the same argument for the new support program for cotton farmers that was approved by Congress as part of fiscal year 2018 omnibus spending package.

But another success for the Brazilians is far from certain.

A spokesman for the National Cotton Council declined to comment for this story.

Brazil first filed its complaint at the WTO against U.S. cotton support programs in 2002 and eventually won the suit. Brazil had claimed that the U.S. subsidies hurt Brazilian exports, and in 2006 the U.S. shut down its Step 2 cotton program and other support programs to comply with the WTO ruling. The USDA paid out hundreds of millions of dollars under Step 2 each year to mills and exporters when high U.S. prices threatened to keep U.S. exports out of foreign markets. 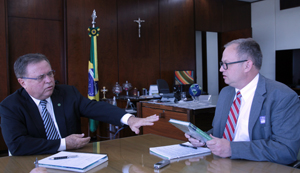 Congress created special marketing loans for cotton farmers in the 2008 farm bill, called “economic adjustment assistance,” but the program was limited to payments that helped farmers improve or expand their existing operations. Lawmakers created the stacked income protection plan (STAX) in the 2014 farm bill, but cotton farmers were disappointed in the results. STAX was essentially another form of crop insurance that complemented traditional policies.

The new “seed cotton” program, approved by Congress this year in the omnibus spending bill, was designed to help struggling U.S. cotton farmers by making seed cotton eligible for the Price Loss Coverage program at a reference price of 36.7 cents per pound. Seed cotton is unginned cotton that includes the seed, which is used for animal feed and cooking oil, as well as the fiber.

Industry representative and lawmakers say the support program, which the Congressional Budget Office says will pay out about $300 million per year, will be easier to defend because of the way the program is designed and because the economics of the global cotton market have changed significantly since 2002. China has a much larger impact on world cotton prices now than it did in 2002, industry officials say.

Maggi disagrees. The new support for U.S. farmers will put Brazilian farmers at a disadvantage and Brazil “won’t have any alternative” but to file another complaint with the WTO, he said.

Dan Sumner, a University of California-Davis economist, told Agri-Pulse earlier this year that the new support program does make the U.S. vulnerable to another Brazilian challenge.