How sorghum's drought-resistant genes could benefit other crops

University of California researchers are on the path to discovering genes that assist in drought resistance in sorghum, which could potentially be applied to other important cereal crops like corn, wheat, rice and barley in the years to come.

“We’re going to need crops that have better drought tolerance in the future,” said Jeff Dahlberg of the University of California Division of Agriculture and Natural Resources. “I envision using sorghum as a model to do gene discovery for drought genes, and then seeing if we can incorporate those into other cereal crops.”

Dahlberg is the director of UC ANR’s Kearney Agricultural Research and Extension Center in Parlier, California. He specializes in plant breeding and genetics and has been working with sorghum for about 40 years now.  His interest in sorghum sprouted during his time as a Peace Corps volunteer in West Africa in the 1980s, where he saw the crop used in Niger, primarily for subsistence farming for human consumption.

“It’s an extremely drought-tolerant crop and I got interested in trying to learn more about it,” said Dahlberg, who continued working with sorghum after the Peace Corps, as he earned graduate degrees at the University of Arizona and Texas A&M.

Currently, Dahlberg is conducting outdoor field-scale drought trials designed to stress different varieties of sorghum before and after they flower so he can test what is happening in the plant and in its soil microbiome during a drought. 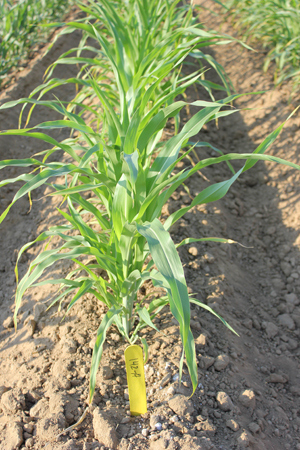 The research is part of a five-year study funded by the U.S. Department of Energy that has multiple researchers from various universities and national labs trying to understand how sorghum, which is a remarkable bioenergy crop and a human staple in many parts of the world, achieves its extraordinary drought tolerance.

Sorghum is the fifth most important cereal crop grown worldwide and provides food for about 500 million people annually. In the U.S., sorghum is primarily grown for animal feed, ethanol production, exports, and now for the gluten-free food market. There are many different types of sorghum, including varieties used for grain, sweeteners, livestock forage, Sudan grasses for hay crops, and biomass feedstocks for renewable fuel production.

“We were able to really see how these communities responded to the pressures,” Dahlberg said. “It’s our belief that these communities are not only responding to what’s happening in the soil, but are in some ways interacting with sorghum, helping it get through these drought periods through various mechanisms that we truly don’t understand yet.”

Fundamental questions like “why sorghum is so drought-resistant” are really starting to be understood, but like anything worthy of researching, more questions are consistently being produced than answered. According to Dahlberg, this is primarily because no one has been able to conduct trials like these at such an intense level on a large scale.

“California is an ideal place to study drought tolerance since most of our crops rely on irrigation because we’re in a Mediterranean climate,” he said. “This is one of the few places in the world, I believe, that we can actually have really good drought field nurseries. I’m able to create drought stress pretty quickly out here because all I have to do is turn off the water.” Unlike California, other states that conduct drought-tolerance research, like Texas or Arizona, have issues like thunderstorms coming through and disturbing the trials, he said.

Another recent advancement in technology - drones - allows the research to proceed more quickly than in the past.

EPA moves to ease regulation of pest-resistant crops
US rice waits its turn with China, while other commodities benefit
Farms large and small could benefit from crop insurance tweaks

“The drones we’re using out here can fly a six-and-a-half-acre field with 1,800 two-row plots of sorghum (3,600 plots) in 25 minutes and that gives us leaf area index, which would take my crew about a year to do,” he said. “It does biomass estimations without having to destroy the plants and takes plant height measurements in 25 minutes. We didn’t have tools like that even five years ago.”

The only problem is that these technologies are expensive.

“You’ve got to throw a lot of money at a question like this to try and resolve it because these technologies that we’re using aren’t inexpensive," he said. “The genomics, proteomics, and metabolic work that we’re doing requires highly skilled instrumentation and people to really make sense of what we’re looking at.” Proteomics is the large-scale analysis of proteins.

Dahlberg has been working closely with Devin Coleman-Derr of the Plant Gene Expression Center, which is a collaborative program between the USDA Agricultural Research Service and the UC Berkeley Plant & Microbial Biology Department.

“Compared to close relatives like maize and other millets, sorghum basically requires much less water,” Coleman-Derr said. “It’s unclear exactly at a molecular level and a genetic level how it does this, but if we could figure that out, we could potentially use that in other crop species, building upon what nature has already done in sorghum and helping some of its close relatives do a better job of dealing with drought themselves.”

The Coleman-Derr Lab in particular is very interested in looking at the microbiome of sorghum plants, and Coleman-Derr believes that certain microbes might actually be recruited by sorghum during periods of drought to allow it to withstand a lack of water. Some of his findings with Dahlberg and his team were recently published in the Proceedings of National Academies of Sciences "reveal a potential blueprint for manipulating plant microbiomes for improved crop fitness.”

Coleman-Derr mentioned that this response to drought is not unique to sorghum. However, sorghum recruits a slightly different and larger core microbiome than most other grasses.

“It has more microbial members, and so we think that there might be something going on there that might be a little bit special,” Coleman-Derr said. “But this enrichment pattern during drought seems to be found in most plants.”

If the researchers can identify specific microbes that benefit sorghum during drought, they can culture them, and it could potentially be a marketable product to assist with farmers in drought-prone areas. Until they isolate a specific drought-resistant gene, this could be their best bet for now.

“I think it would be beneficial to wheat, rice, corn and all the cereal crops that we grow because we’re going to have to figure out how to grow crops with more limited water availability,” Dahlberg said. “Anything that helps in terms of responding to drought is going to be useful for helping us feed the world of the future.”