The two 2018 World Food Prize laureates announced on Monday have never worked with each other, but their roles in improving maternal and child nutrition worldwide go together.

Lawrence Haddad and David Nabarro will share the award for their “individual and complementary global leadership in elevating maternal and child undernutrition to a central issue within the food security and development dialogue at national and international levels,” the World Food Prize Foundation said in a news release. Haddad and Nabarro will be honored at a ceremony in Des Moines, Iowa, in October.

“They chose these two individuals who didn’t work together, but their complementary roles, one doing the research, one doing the organizing, together has had that dramatic impact: 10 million fewer stunted children in the world,” Kenneth Quinn, president of the World Food Prize Foundation (pictured above, at podium), told Agri-Pulse following a ceremony at USDA’s Jamie L. Whitten Building.

“I dedicate this World Food Prize to the leaders, scientists, and activists who are championing the principle that feeding the world is no longer enough – we must now nourish it,” Haddad, who was not present, said in a news release issued by the foundation. “One in three people are malnourished, with no country exempt.”

Nabarro said, “As I receive this wonderful award, I reflect on the thousands of courageous women and men who are working at (the) local level for food systems that are well-functioning and just. They have the wisdom needed to reduce levels of malnutrition or diet-related illness. They can devise food systems that benefit people and the planet, and that contribute to the (United Nations') 2030 Agenda for Sustainable Development. They are the transformation leaders of the future.”

The 2018 laureates’ work “significantly improved nutrition for mothers and children in the critical first 1,000 days of life – the period from pregnancy to a child’s second birthday,” the foundation said. “Their relentless leadership and advocacy has also inspired efforts by countless others that have collectively reduced the world’s number of stunted children by 10 million between 2012 and 2017.

“Haddad’s and Nabarro’s work in mobilizing political will to make nutrition the focal point of development strategies came in response to a sudden, near doubling of wheat, maize and rice prices that occurred in 2007-2008” – what was known as the “food price crisis,” the foundation said.

Haddad, then the head of the Institute of Development Studies (IDS) in the United Kingdom, employed evidence “to convince policy-makers in the United Kingdom, Ireland, and many other countries to make nutrition a central part of their development strategies,” the foundation said. Haddad has been executive director of the Global Alliance for Improved Nutrition (GAIN) since 2016.

Nabarro became head of the newly created UN High Level Task Force on Global Food Security in 2008 and two years later was appointed as coordinator of the UN’s Scaling Up Nutrition (SUN) Movement, where he was responsible for persuading 54 countries and one Indian state to join forces and implement evidence-based policies and programs. 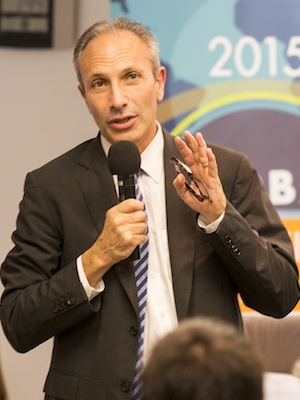 “In these twin roles, he was able to bring together a broad group of stakeholders around nutrition and food security at the national, regional and global levels that included the leaders of dozens of countries suffering from high rates of malnutrition, the heads of UN agencies, representatives from donor groups, and members of civil society organizations,” the foundation said. “As a result, agriculture and food went from being a low priority issue to mainstream.”

Nabarro retired from the UN in June 2017, but continues to serve on SUN’s high level Lead Group, which guides SUN’s activities.

The World Food Prize is the foremost international honor recognizing – without regard to race, religion, nationality, or political beliefs – the achievements of individuals who have advanced human development by improving the quality, quantity or availability of food in the world.

Haddad and Nabarro will split the $250,000 award that goes with the prize.

According to the World Food Prize’s official website, the award emphasizes the importance of a nutritious and sustainable food supply for all people. “By honoring those who have worked successfully toward this goal, The Prize calls attention to what has been done to improve global food security and to what can be accomplished in the future.”

The laureates will be recognized at a ceremony in the Iowa State Capitol Building in Des Moines on Oct. 18. For more information, go to the World Food Prize website.