The multifront trade war erupting on all sides of the U.S., with allies and others alike, is reaching new heights this week. China is preparing to enact $34 billion worth of tariffs on Friday that have U.S. producers of everything from strawberries to beef bracing for a major disruption in exports.

The slow-moving avalanche that is the U.S.-China trade conflict is already hurting U.S. farmers and ranchers. Chinese importers have been shunning U.S. soybeans for months in fear of the coming 25 percent tariff that China has promised, and now Chinese buyers have been canceling dairy and beef shipments, according to U.S. industry officials.

American Soybean Association President John Heisdorffer says his organization has been doing everything it can to avoid a trade war.

“ASA, along with board members, states, growers and the entire soy family, has worked tirelessly to convey to the (Trump) administration and members of Congress that these tariffs will unduly harm soy growers and rural America,” he wrote in an open letter after returning last week from a trip to Brazil, which China has been turning to for soybeans.

First it was the U.S. tariffs on steel and aluminum. The aim was to get China to stop over-producing the metals, the U.S. said, citing Section 232 of the Trade Expansion Act that allows the U.S. to use tariffs as a way to protect national security.

The import taxes – 25 percent on steel and 10 percent on aluminum – were also eventually applied to Mexico, Canada and the European Union. China retaliated on U.S. pork, nuts, dairy and produce. Mexico retaliated on U.S. pork, potatoes, dairy and apples. The EU levied tariffs on orange juice and rice. And Canada, which waited longer than most, announced on Sunday it is hitting back against U.S. yogurt, maple syrup and ketchup.

The next phase begins Friday. The Trump administration is scheduled to begin imposing tariffs on $34 billion worth of Chinese goods under Section 301 trade law to try to persuade the country to stop appropriating U.S. intellectual property through forced technology transfer and outright theft. In response, China is threatening $34 billion in tariffs on just about everything U.S. farmers and ranchers produce and sell.

U.S. beef in the crosshairs

One of the biggest casualties if the U.S. and China follow through with their threats is the U.S. beef industry. China isn’t a major buyer of U.S. beef yet, but U.S. ranchers want it to be. That’s why the cheers from cattle ranchers were so boisterous last summer when China announced it was lifting its 13-year ban on U.S. beef – enacted after a mad-cow scare – giving the industry a foot in the door to the fast- growing market with a population of 1.4 billion.

“We’re still a hot ticket item,” said Kent Bacus, international trade director at the National Cattlemen’s Beef Association. “We’re still new and there’s something to be said for that. We had no trouble moving product in China. As soon as it was through the port, it was sold.” 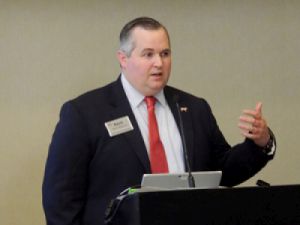 But Chinese restrictions on U.S. beef are numerous and taxes are already high. Beyond the standard Value Added Tax, China applies import tariffs ranging between 12 and 25 percent on U.S. beef.

On Friday, all of those tariffs are set to go up by 25 percent, meaning Chinese importers will be paying anywhere between 37 and 50 percent in total import taxes, threatening the market access U.S. ranchers fought long and hard to get.

“I think the uncertainty that this creates – potentially, it could shut us down,” Bacus told Agri-Pulse. “It could be devastating … There’s other grain-finished product – not the same as ours, but China can import from Australia and Canada. What little market share we were gaining is going to be hard to hold onto.”

Joe Schuele, communications director for the U.S. Meat Export Federation, agrees that the situation could be bad, but he said he expects U.S. exporters to hang on.

“We don’t expect the higher tariff rate to halt beef exports to China, but it will make establishments that serve U.S. beef less likely to feature it,” he told Agri-Pulse. “The higher tariff will also impede the progress the U.S. industry has made toward reestablishing a foothold for U.S. beef in the Chinese market.”

California has a lot to lose

From walnuts to onions to milk, California is the largest producer and exporter of many of the long list of commodities that will be subject to the new 25 percent tariffs on Friday, and producers are scrambling to understand just how bad their business is going to be hit, said Sara Neagu-Reed, federal legislative associate for the California Farm Bureau Federation.

As of now, though, Neagu-Reed said, it’s tough to say much more than, “It’s not good. China is our third-largest exporting market, so it will definitely have a negative impact.”

And much of that pain and confusion is stemming from the fact that China will be combining its steel and aluminum retaliatory tariffs and its retaliation for the 301 tariffs that are set to go into effect Friday.

Breaking it down for walnut farmers (China bought $78 million worth in 2016), as of Friday importers will have to pay the base Most Favored Nation tariff allowed by the WTO of 25 percent, plus the 232 tariff of 15 percent as well as the 301 tariff of 25 percent. That’s a whopping 65 percent in tariffs.

California farmers sell more than $500 million worth of almonds every year to China with a 10 percent base tariff. China tacked an extra 15 percent on because of the U.S. steel and aluminum tariffs, and another 25 percent will be added on Friday. That will be a total of 50 percent in tariffs.

Paul Wenger, a California almond grower and former president of the California Farm Bureau Federation, told Agri-Pulse in a recent interview that he expects the Chinese tariffs to have wide-ranging effects. Chinese importers will demand lower prices, and then buyers from Spain and India, the two largest foreign markets for U.S. almonds, will follow suit.

Hopes were high in early June for a U.S.-China agreement that would avoid any new tariffs. Both sides had just met in Beijing for their third round of talks, and the Chinese had agreed to several key demands by U.S. negotiators, including provisions that would open up China for increased imports of U.S. farm commodities.

Treasury Secretary Steven Mnuchin even announced that the trade war was on hold.

“To be clear, Trump has given China every chance to change its aggressive behavior," White House trade adviser Peter Navarro said afterwards.

And yet the U.S. still needs China’s help in getting North Korea to keep its pledge to denuclearize, one of the Trump administration’s biggest foreign policy initiatives. Key to the effort is maintaining economic sanctions on North Korea, and the U.S. needs China help keep the screws on North Korean leader Kim Jong Un’s ability to export coal and petroleum. That was a main topic when Secretary of State Mike Pompeo called Chinese Foreign Minister Wang Yi on Friday last week, according to a State Department spokesperson.

That may be one reason why President Trump decided last week not to impose new restrictions on Chinese investment into the U.S., and it may be a factor in just how far the trade war escalates.