Alarm sounded in US after African Swine Fever outbreaks in China

The U.S. pork industry is raising concerns about the possibility that African Swine Fever – a deadly animal disease that has never been found in North America – could spread to the U.S., costing hog producers and pork processors billions of dollars in lost export sales.

Right now, most of the world’s attention on ASF is focused on China, the world’s biggest pork producer, which, until August, had never confirmed an outbreak of the highly contagious virus. Since then, there have been at least 14 detections of the disease in six different provinces in eastern China.

Those outbreaks prompted the UN’s Food and Animal Organization to call an emergency meeting last week of specialists from China and nine neighboring countries. As the meeting closed, Juan Lubroth, the FAO’s chief veterinary officer, said it was no longer “if” the disease would spread to other areas bordering China, including the Korean peninsula,  but “when,” likely through movements of processed or raw pork.

The National Pork Producers Council also hosted a meeting last week in Washington at which the pork industry outlined the threat posed by ASF and why the threat is becoming more dangerous. In attendance were USDA officials including Dr. Jack Shere, the department’s chief veterinarian, as well as representatives from the American Association of Swine Veterinarians and the Swine Health Information Center.

Dave Pyburn, the National Pork Board’s senior vice president of science and technology, attended the session and said all participants understood the gravity of the threat.

“ASF used to be basically confined to the continent of Africa, and we didn’t do a lot of trade in food products or feed additives with Africa,” Pyburn told Agri-Pulse. “Today, we not only have Russia and Eastern Europe, but now it’s spread to China. This really raises the risk, based on all the trade we do, especially in feed trade with China,” which ships nearly 2 million tons of ag products, including feed and feed additives, to the U.S. each year.

Pyburn cited research by Scott Dee, with Pipestone Veterinary Services in Minnesota, which shows that the ASF virus can survive a 30-day ocean voyage in feed products and feed ingredients as well as in empty storage containers. And he said if the virus does show up in the U.S., the effects could be enormously harmful, pointing to research by Iowa State University’s Dermot Hayes, who concluded the pork industry could lose as much as $8 billion in the first year after detection. Corn and soybean farmers would also be hurt as herds were culled and feed sales fall. 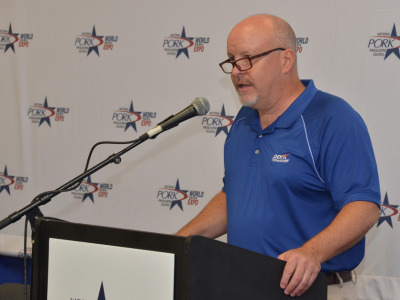 ASF is a highly contagious viral disease that can spread very rapidly in pig populations. Hogs can contract the virus in a variety of ways, including transmission by ticks and direct or indirect contact between animals, as well as by contact with contaminated food, animal feed or vehicles. ASF can survive for long periods in uncooked swine products, which can facilitate its introduction into new areas. The virus, which has a mortality rate of near 100 percent, is extremely hardy and can withstand extreme environmental conditions in fresh and frozen meat. In China, more than 40,000 pigs have already been euthanized.

ASF can be transferred by humans, but the virus does not affect people, and is believed to pose no risk to human health. ASF has already been an issue this year in eastern Europe, but August marks the first time the world’s largest pork producing country has reported a case.

While there is no vaccine against ASF, the government and the pork industry are taking steps to protect U.S. herds.

Pyburn said U.S. Customs and Border Protection has increased inspections of cargoes and passengers from countries with a history of ASF infections showing up at any of the 328 ports of entry into the U.S. Rules concerning the collection and destruction of garbage from ships and aircraft arriving in the U.S. are also being strictly enforced.

Industry-wide, we’re also talking with USDA and FDA to see how we can effectively investigate the feed mills and other facilities in China to make sure they are biosecure and adhere to higher standards,” Pyburn said.

The Swine Health Information Center is also funding research into methods to test bulk feed products for the presence of the ASF pathogen. “We’re also looking into methods we could use to shorten the virus’ lifetime in storage” through temperature or possible chemical treatment, he said.

Industry experts have also compiled a checklist of critical points for pig farmers to bring up with their feed and feed-ingredient suppliers with the objective of starting a dialog about feed ingredient safety. They include discussions about a facility’s programs for pest control, traceability and its training program for feed safety, as well as its biosecurity program. Farmers should also ask whether the feed mill uses ingredients that were manufactured or packaged outside of the United States.

“While this virus poses no threat to human health or any food safety concern, it could have a devastating economic impact if it would be found in the U.S.,” said Iowa Agriculture Secretary Mike Naig, whose state is by far the biggest producer of pigs and pork in the U.S. “Our pork producers do a great job with biosecurity and protecting pig health and the new cases highlight the importance of everyone remaining diligent in their biosecurity efforts.”

The American Farm Bureau Federation, meanwhile, says it is unlikely U.S. pork exports to China will see a significant increase as a result of the outbreak.

“We are in the middle of a trade spat with China, facing steep tariffs on U.S. pork imports into the country,” AFBF says on its website.  “Even if a significant disruption were to happen, it would take quite a bit to overcome the 70 percent tariff that U.S. hams and shoulder cuts are facing. Additionally, China is ractopamine-free, and while the U.S. produces some ‘racto-free’ pork, it is not a sizable amount. China would be more likely to turn to another racto-free country such as the European Union or Canada before turning to the U.S. or Brazil.”