Though the remnants of Hurricane Florence finally dumped their last torrents of rain near the U.S. Northeast coast and drifted back out to the Atlantic Ocean Tuesday, the storm’s havoc is sure to plague the Carolinas and its farms for weeks.

Indeed, agriculture in North and South Carolina is sharing in the misery and economic losses, especially in the low-lying coastal plain that extends across the eastern part of both states. That’s where Florence hit hardest, dumping more than 30 inches of water in some areas since last Friday.

The storm has claimed more than 30 lives in the two states, and, as of Tuesday afternoon, more than 300,000 customers were without power in North Carolina and thousands more in South Carolina. And while flooded rivers were starting to recede in mountainous and piedmont regions, they’ll keep rising in many areas, some into record levels, and will continue to rise into next weekend. One result: 1,500 roads, including major highways, were still flooded and closed in North Carolina on Tuesday, and many won’t reopen soon.

For North Carolina’s massive, highly diverse ag sector, the torrential rains came as many crops were maturing and farmers were beginning to harvest.

Andrea Ashby, public affairs director for the North Carolina Department of Agriculture, points out that “six of our top 10 counties (in farm cash receipts) are in the area hit by the storm,’’ and she says most of the damage will be due to flooding, not from the hurricane winds, and the flooding may continue for weeks.

Says Wooten: “Fifty percent . . . the money part of the tobacco crop, was still in the field.” Tobacco is the state’s biggest crop by value, with $724 million in receipts last year, and could see losses ranging from 25 percent to 100 percent in some fields.

What’s more, “our farmers put their green tobacco into the bulk curing barns,” he explained, and they need a generator to keep air on the tobacco once harvested. So, where the electric power is out and auxiliary generators aren't available, the tobacco will soon rot, and “what is in the barn is totally wasted.” 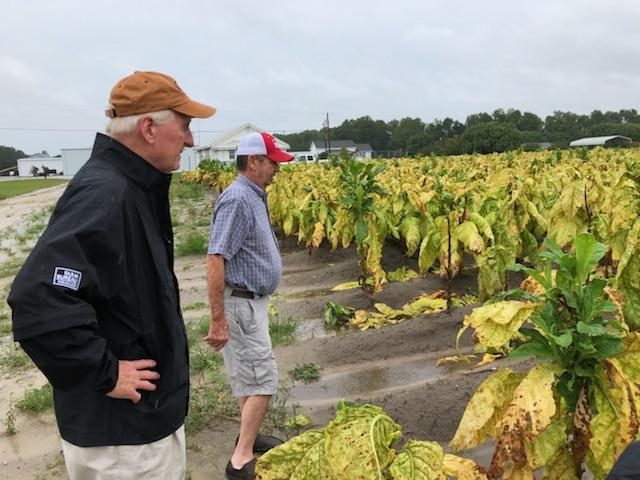 Cotton, soybeans, peanuts and other major crops – now ready for harvest, or nearly so – remain in fields, many of which are under water. “We hadn’t quite started digging peanuts yet. If the sun comes out and it begins to dry out, we may be OK (for the peanut crop),” Wooten said.

Also, North Carolina farmers, who grow over half of America’s sweet potatoes, had scurried and managed to harvest a fourth of this season’s crop before Florence hit. Survival of the rest of the crop will depend on water quickly leaving fields, Wooten said.

Katherine Drake Stowe, interim chief executive of the North Carolina Soybean Producers Association, says, “absolutely, our guys are going to take losses in some areas.” But she points out that the state’s bean acreage “is spread out across eastern Carolina,” and the northeastern region has had little flooding. On the other hand, she said, agronomists advise that soybean crops can usually sit in rain water for three to four days and survive, but, after that, a field left standing in flood waters means soybeans “are adulterated and that grain should not be sold.”

In South Carolina, where farm production is also diverse but smaller that in its northern neighbor, farmers were luckier in some ways.

The South Carolina cotton crop is concentrated in the state’s coastal northeastern counties where Florence hit the hardest, and so, as in North Carolina, “has taken a very hard hit . . . and some soybeans have as well,” said Sally McKay, communications director for the state's Department of Agriculture.

However, the state’s celebrated peach harvest wrapped up last month, and most crops of melons and summer vegetables have been harvested, she said. Plus, about 90 percent of the corn crop had been harvested before the storm, she said. "That’s what a lot of our farmers were doing last week,” she said. North Carolina farmers had managed to harvest two-thirds of their corn. 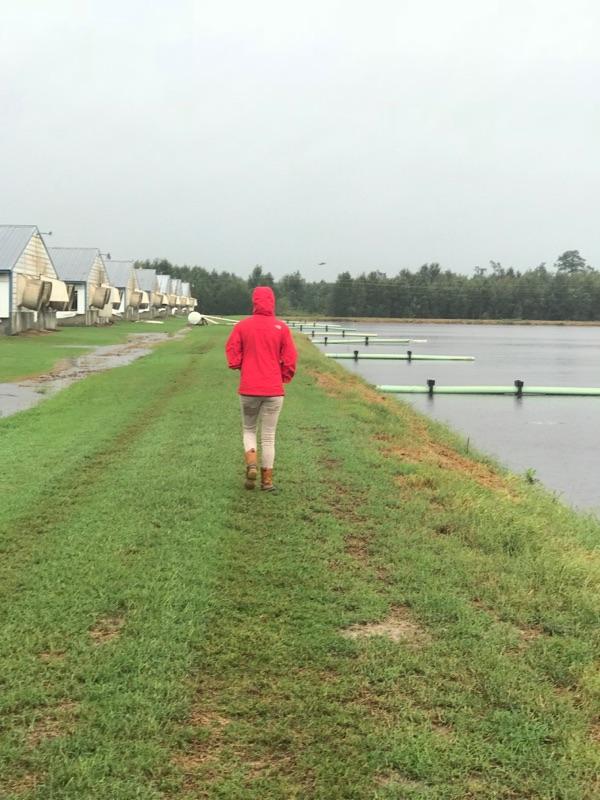 Meanwhile, 20 South Carolina farmers grew their first legally permitted crop of industrial hemp in that state this year. Unfortunately for them, the crop remains an outcast of the subsidized federal crop insurance program because it is variety of the marijuana plant, outlawed by federal law. The hemp acres, scattered across the state, will apparently have some losses where fields are in low-lying areas, said Lucas Snyder, the South Carolina Hemp Farmers Association executive director.

For livestock, the resilience that producers of swine and poultry in the two states have built in recent years against floods and other disasters is becoming increasingly evident.

Poultry producers and processors “have been up to their alligators” in Florence’s flood waters, said Connie Smith, president of the South Carolina Poultry Federation. She said that poultry farmers and processing plants have been building defenses against flooding since Hurricane Floyd hit the Carolinas in 1999, and now, “we’ve got farms that are running totally off their generators because the (public utility) power is out” in so many rural areas.

She notes that South Carolina Gov. Henry McMaster issued a waiver of limits on hours of driving trucks, and producers and suppliers were moving birds to slaughter plants, and feed and fuel to farms and to flood-protected staging sites around the clock for days before Florence. “That hopefully helped a good bit,” she said.

Still, she said she knew Monday of at least one chicken-meat processor whose plant had flooded in the northeast corner of the state, and workers there were trying to relocate their offices from the inundated facility.

In North Carolina, where the swine and poultry industry is much larger, most of the 194 slaughter plants for swine, cattle and other livestock inspected by the state prepared extensively ahead of the storm and they expected to close for days, said Ashby, with the state Ag Department. As of late Monday, 33 plants remained closed, most apparently waiting for flood waters to recede. Three plants reported being flooded and some others were left without a public power source.

Sanderson Farms, a major poultry producer and processor, reported Tuesday that 60 of its 880 broiler houses on North Carolina contract farms had flooded, killing about 1.7 million broiler chickens, and that another 30 farms are isolated by floodwaters and could not be reached by feed trucks. Tyson Foods also reported two poultry farms in the Fayetteville area impacted by Florence.

Meanwhile, a USDA spokesman said late Tuesday that 29 red meat and poultry plants under federal inspection in the Carolina were closed for reasons linked to Hurricane Florence

Across North Carolina’s vast swine breeding and feeding operations – with 2,100 commercial farms and about 3,300 treatment lagoons – Florence's effects tracked as of Tuesday by the North Carolina Pork Council (NCPC) were widespread as producers fought to keep swine safe and fed.

“The historic flooding in the aftermath of Hurricane Florence has continued to cause widespread impacts . . . (including) at least a dozen of our hog farms,” NCPC said in a statement. Seven farm lagoons had “overtopped” because of the torrential rains, and rising rivers had flooded four others, NPPC said. Yet, there had been only one actual breach of a farm lagoon, and that was on a small farm in Duplin County, the group reported , and, so far, manure “solids remained in the lagoon."

With some rivers not expected to crest for days, NCPC suggested that more farms would be affected this week, but noted that pollution from flooded hog farms may be much less than from the state’s municipal sewage treatment plants, if the experience of 2016’s Hurricane Mathew is repeated. That storm pushed 154 million gallons of raw municipal waste into the state’s waterways, according to a North Carolina Division of Water Resources report.

Most important, said the Farm Bureau’s Wooten: “We need it to quit raining . . . so we can let the water get out and we can get roads opened up.” And the weather may be cooperating: sunny or partly sunny days are predicted for the next several days.