ESA proposals get mixed reaction in comments to FWS, NMFS

Far-reaching proposals designed to clarify regulations under the Endangered Species Act are getting solid support from industry and scathing criticism from environmental groups concerned that the changes would imperil at-risk wildlife.

The Fish and Wildlife Service and National Marine Fisheries Service, which implement the 1973 law, have proposed a number of changes “to ensure clarity and consistency” in the law, they said in July, including a new process to speed up the interagency consultation process, during which FWS and/or NMFS would work with federal “action agencies” to minimize the effects of projects or actions they have to approve.

Included among those actions are approvals of pesticide registrations, the subject of lawsuits that have resulted in multiyear schedules requiring the Environmental Protection Agency to examine the effects of some widely used pesticides on threatened and endangered species.

FWS and NMFS have proposed an “optional collaborative process” that would allow them to adopt much of the analysis prepared by the action agency for their biological opinions – the documents required by the ESA that lay out measures needed to minimize the effects of the action, such as registration of a pesticide on listed species.

Then, as FWS (and/or NMFS) prepares its biological opinion, it would be able to add its own “supplementary analyses” to the action agency’s analysis, FWS and NMFS said in their proposal.

“The increased collaboration with the federal agency the proposed amendments describe is consistent with our longstanding advocacy for greater coordination between EPA and the services regarding pesticide consultations,” CropLife America said in comments submitted Monday. 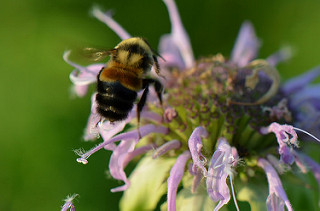 The rusty patched bumble bee was listed as endangered in 2017.

CLA said that biological opinions on pesticides have in recent years “included thousands of pages and consumed years of work for the services and EPA. More efficient consultation processes tailored to pesticide decisions would allow the services to better manage their overall consultation workload and provide the agricultural and public health sectors with timelier and more predictable outcomes under the ESA.”

FWS and NMFS “should work with EPA to develop guidance and templates that reflect a shared understanding among the three agencies about the contents of pesticide biological evaluations (prepared by the action agency) and biological opinions,” CLA said.

The optional collaboration process was not popular with most environmental groups, however. The Center for Biological Diversity, which has filed multiple lawsuits that have resulted in court settlements requiring pesticide consultations, said the agencies have not explained exactly how it will work. For example, the services can now enter into “alternative consultation agreements,” but the proposal does not explain whether those would supersede the new collaborative process, CBD said.

CBD opposed any attempt to expedite consultations “as violating the plain meaning of the (ESA) and having no basis in fact since the overwhelming majority of consultations are completed on time.” The services, CBD said, “have not articulated a reason for this change, nor have they provided a single example of how such expedited consultations would work in the real world.”

The Environmental Policy Innovation Center (EPIC), an environmental group that has worked with CropLife and other industry groups, the services and environmentalists, called the optional collaborative process “vague but intriguing.” The change “would likely involve the federal agencies playing a larger role in providing the services with analysis and documentation that the services would normally complete by themselves during formal consultation,” EPIC said.

Allowing FWS and NMFS to adopt analyses prepared by action agencies simply would formalize what is already sanctioned by the agencies, EPIC said.

“There’s nothing earth-shattering here, as most of these proposed changes are already allowed by the current consultation handbook,” a guide to implementing that section of the ESA, EPIC said.

Considering that FWS completed an average of 11,344 consultations annually from 2011-17, even small changes can yield outsized effects,” EPIC said. “In fact, we regularly hear that services staff lack the time to work on recovery actions and voluntary conservation plans because they are consumed with (ESA's) Section 7 consultations and listing decisions. Reducing the Section 7 paperwork, without compromising the quality of the work, can free agency staff to pursue other efforts that directly promote recovery” of species.

The proposal would make other changes to the consultation process. For example, it would eliminate the distinction between direct effects, indirect effects, interrelated actions, and interdependent actions, when defining the “effects of the action” to be evaluated. In addition, “the proposal would clarify that all activities and effects of a proposed action must occur ‘but for’ the action and must be ‘reasonably certain’ to occur,” CLA said.

The new definition of “effects of the action,” CLA said, “simplifies the definitional task and could help eliminate disputes about the scope of a pesticide action.” The other part of the proposal would influence how the agencies determine the amount of a particular pesticide that growers use.

Supporting the changes, CLA said, “A major issue with pesticide consultations is how to properly define the scope of the proposed action and its effects. The proposed definition could result in pesticide effects determinations (and, ultimately, biological opinions) that better reflect real-world use scenarios.”

“Importantly, only uses that are reasonably certain to occur would be considered an ‘activity’ in a pesticide consultation,” CLA said. “Thus, the services would presumably not assume maximum allowable label rates, but rather constrain the scope of consulted-on ‘activities’ to reasonably certain use scenarios.”

But that would mean FWS and NMFS would have to determine “which uses, and how much, are reasonably certain," EPIC said. "This analysis can be challenging without adequate data. Where the data are poor or nonexistent, we are unclear how the services will proceed.”

FWS and NMFS have their work cut out for them. The three separate rulemaking proposals, which also propose changes to the way threatened species and critical habitat are addressed under the ESA, have garnered more than 180,000 comments. It is unclear when the proposals will be finalized.