In an effort to meet the state's Low Carbon Fuel Standard (LCFS), California has increased its net supply of renewable diesel, reaching 100 million gallons during the second quarter of 2018. The U.S. Energy Information Administration says that equals 10.1 percent of the total diesel supplied to California during the quarter.

Administered by the California Air Resources Board (CARB), LCFS aims to incrementally decrease the carbon intensity of motor gasoline and diesel fuel by at least 10 percent by 2020 relative to a 2010 baseline.

Renewable diesel, also know as green diesel, is chemically similar to petroleum diesel and nearly identical in its performance characteristics. The fuel shares the same fat, oil and grease feedstocks as biodiesel, but it can be blended into petroleum diesel at higher blend levels. And while biodiesel is produced via trans-esterification exclusively from lipids, renewable diesel is often produced either through hydrotreating at a biorefinery or co-processing at a petroleum refinery using either lipids or biomass.

The LCFS compliance process is similar to that of the Renewable Fuels Standard (RFS). Petroleum refiners, importers of motor gasoline and diesel, and wholesalers of motor transportation fuel are required to either produce low carbon fuels or purchase credits to demonstrate compliance. But while under the RFS, both biodiesel and renewable diesel meet a 50 percent greenhouse gas (GHG) reduction threshold (and are eligible to generate biomass-based diesel RINs), LCFS uses a measurement called carbon intensity (CI).

Credits generated by renewable diesel producers have some of the lowest CIs of any LCFS-approved liquid fuels. Much of the low CI fuel is made from used cooking oil feedstock. Renewable diesel boasts a lower CI than ethanol and is nearly equal to biodiesel. But CARB Spokesman Dave Clegern said the LCFS does not play favorites.

"The Low Carbon Fuel Standard is specifically designed to provide options," Clegern told Agri-Pulse. He noted that renewable diesel is "definitely something that is increasing in share. And we're glad to see it, because it is cleaner."

Renewable diesel generates a large number of credits relative to other fuels because it has some of the largest lifecycle GHG reduction compared to other fuels. The total volume of renewable diesel LCFS credits exceeded ethanol credits for the first time this year, reaching about 870,000 metric tons  of carbon dioxide equivalent during the second quarter. 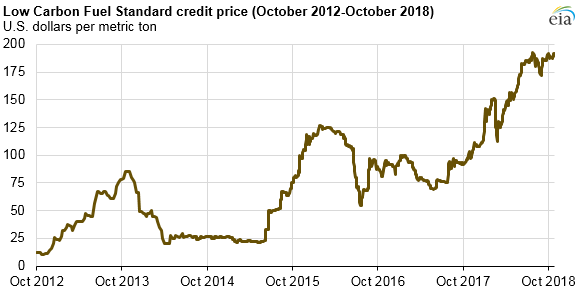 CI requirements have become more stringent, increasing the cost of  LCFS credits over the past seven years. Previously, prices averaged lower than $100 per metric ton (mt). A year ago, LCFS credits averaged $89/mt, but that price nearly doubled through the first 10 months of 2018, growing to $164/mt. With those growing costs, refiners and wholesalers face a greater challenge in meeting their annual CI targets.

A number of LCFS amendments are slated to go into effect in 2019. Clegern said none of those impact refiners directly, but apply more to electricity providers. Those amendments include an extension of the program to increase the total reduction in CI to at least 20 percent by 2030. In addition, the amendments incentivize development of additional zero emission vehicle infrastructure and the sale of electric and hydrogen vehicles. The extension, approved by CARB in September, also puts in place the most stringent regulatory protocol in the country to set requirements for carbon capture and storage.