The new farm bill largely preserves the commodity and conservation programs, but it includes some significant improvements for dairy producers and also would raise price floors for sugar and other commodities.

The House and Senate Agriculture committees have yet to release details of the final legislation, but the House panel’s ranking Democrat, Minnesota Rep. Collin Peterson, has started discussing some of the provisions in what he says is otherwise “pretty much a status quo bill.”

Smaller scale dairy producers will be among the biggest beneficiaries, he told reporters this week in Minnesota. “You will not be able to lose money unless you really try,” Peterson says. “Hopefully, we’ll have the safety net for dairy farmers to stay in business.”

The bill would build on enhancements that Congress made to the Margin Protection Program in February in a budget deal that sharply reduced premiums for the first 5 million pounds of production, the equivalent of about 240 cows. It also would raise the top margin coverage level from $8 per hundredweight to $9.50. 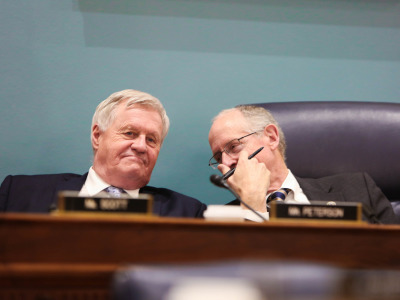 Producers who have been enrolled in MPP in the past would be allowed to get 75 percent of their past premiums refunded if they sign up for the revised program. If they don’t, refunds are limited to 50 percent. “We’re trying to get people to utilize the program and buy a safety net,” Peterson said.

Producers who enroll in the dairy program would be allowed to cover the same production with the Dairy Revenue Protection insurance policies that went on the market this fall but not with USDA's Livestock-Gross Margin program.

“There’s going to be a lot of options available to dairy farmers. Some people say this is too good," Peterson said. But he said he wasn’t concerned that smaller operations would overproduce and distort the market because farms with under 5 million pounds of production only account for 15 percent of the nation’s supply.

Other changes in the bill:

Commodity programs: Price Loss Coverage reference prices would not change, but there would be an escalator provision to increase them if commodity prices rise significantly for several years. A similar provision was in the House-passed farm bill. “You’d have to have $6 corn before it would ever make any difference,” Peterson said.

Yields for the Agriculture Risk Coverage program would be based on Risk Management Agency data rather than National Agricultural Statistics Service surveys. Farmers would be allowed to switch between ARC and PLC next year and again in 2021 and following years.

Loan rates would be raised about 15 percent. The rate for corn would go from $1.94 per bushel to $2.20. Loan rates for sugar would be raised 1 cent for cane sugar and 1.28 cents for beet sugar. Loan rates serve as a floor under commodity prices for producers since they can claim a payment for the difference between the price of a commodity and its loan rate when the market price is lower.

The final bill would allow a farmer’s cousins, nephews and nieces to qualify for commodity program payments, which are limited to $125,000 per person or $250,000 per married couple.

Conservation programs. The cap on the Conservation Reserve Program would be raised from 24 million to 27 million acres. To offset the cost of that new acreage, payments for land enrolled under general signups would be capped at 85 percent of the local rental rate. Payments for acreage enrolled under the continuous signup would be limited to 90 percent of local rental rates. Two million acres of the increase would go to grasslands, sources say.

The Conservation Stewardship Program would remain as a standalone program. The House bill would have folded it into the Environmental Quality Incentives Program.

Rural electric cooperatives. The final bill would tap the same source of funding as the Senate-passed bill, the “Cushion of Credit” account used by rural electric cooperatives. The account currently guarantees a rate of 5 percent on co-ops’ deposits, a much higher rate than they can get from private sources. The deposits can only be used to pay off USDA loans, but the balance has grown to more than $7 billion, up from $594 million in 2007.

The Senate bill prohibited new deposits and cut the interest rate on existing balances, and Peterson said $2.5 billion was carried over into the final bill.

Peterson acknowledged that the other negotiators didn’t want to talk about details of the bill until closer to the final votes. “There’s concern on some of the members’ part that when people find out what’s in the bill it will start unraveling,” he said.

He said he is confident that the bill will pass the House, predicting that most Democrats would support it.

House Agriculture Committee member Rep. James Comer, R-Ky., told reporters over the weekend that he expected the bill to pass the House only narrowly but to get about 75 votes in the Senate. The Senate passed its version of the measure, 86-11.

Sen. Chuck Grassley, R-Iowa, told reporters Tuesday that he was angry that the bill included the provision to expand the number of family members who could qualify for commodity payments and wasn't sure he would vote for the final measure. The bill also leaves out language he got into the Senate bill to tighten the definition of "actively engaged" in farming, an eligibility requirement for payments.

"This is how out of control the waste of taxpayers' money has gone and the injustice it does to family farmers that have dirt under their fingernails and are entitled to some protection from the federal government," Grassley said. "Giving all this money to people who aren’t farmers is just going to jeopardize popular support for helping the family farmer."