President Donald Trump and the White House have been making big promises about China coming back into the market to purchase U.S. farm commodities, but the details over which products, how much and when this may happen remain murky beyond descriptive terms like “massive amounts” and “immediately.”

Much of that celebratory talk came Saturday night following two days of talks between U.S. and Chinese negotiators in Buenos Aires, capped off by a meeting between Trump and Chinese President Xi Jinping.

The Trump-Xi meeting is still being heralded by the White House as the beginning of the end to a trade war that’s taken a steep toll on U.S. exports of soybeans, sorghum, pork, and many other commodities.

A White House statement Saturday night said the U.S. agreed to delay for 90 days on a planned increase in tariff rates on $200 billion of Chinese goods. In return, it said, China pledged to “start purchasing agricultural products from our farmers immediately.”

Yet, it wasn’t until several hours before we published today that the Chinese government seemed to acknowledge some of the specific details of the discussions.

A spokesperson for the Ministry of Commerce (MOC) said Wednesday that the latest meeting between presidents of China and the United States on economic and trade issues was "very successful,” according to Xinhua, China’s official state-run press agency.

"We are confident about the implementation [of the consensus from the meeting]," the spokesperson said. "In 90 days, economic and trade teams of both sides will actively push forward the consultation following clear schedule and roadmap,” Xinhua reported.

China will start with implementing the specific aspects of the newly-reached consensus as soon as possible, according to the spokesperson.

Still, there is uncertainty about how the 90-day game plan will unfold. Ag Secretary Sonny Perdue, who was not in Buenos Aires, seemed less confident that China’s retaliatory tariffs on U.S. ag will be coming down immediately to make way for Chinese imports when he talked to reporters on Monday.

“That’s yet to be determined,” Perdue said. “That’s what we don’t know. I’ve been talking with our negotiators and those are the issues that are going to be fleshed out here in the next few days …” 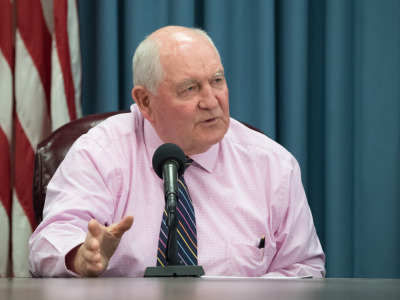 Treasury Secretary Stephen Mnuchin confirmed Tuesday in a CNBC interview that China has offered to buy about $1.2 trillion worth of U.S. products, but he played down the importance of the potential boost in trade.

The details of those purchases still need to be worked out, he said, “but I want to emphasize this isn’t just about buying things. This is about opening up markets to U.S. companies and protecting U.S. technology.”

Farmers have been slammed by the Chinese tariffs that have virtually halted U.S. exports at a time when the U.S. is usually shipping millions of dollars’ worth of their crops to China.

First it was “Section 232” tariffs the U.S. slapped on Chinese steel and aluminum and then it was “Section 301” tariffs aimed at hundreds of billions of dollars in other Chinese goods that sparked China’s retaliation – mostly on U.S. ag.

China is still charging a 25 percent tariff on U.S. soybeans, corn, wheat and sorghum. The import taxes on U.S. dairy range from 27 to 45 percent and tariffs on cherries, almonds, oranges and lemons are as high as 50 percent.

Kirk Merritt, executive director of the Ohio Soybean Association, tells Agri-Pulse that his members took heart from the good news that flowed from Buenos Aires, but they want to see actual tariffs come down and sales restart.

“It certainly appears that China has made some commitment to resume purchasing American soybeans,” Merritt said. “We haven’t seen that yet. We’re anxiously awaiting details and certainly hope that this will reopen the opportunities in China for exports of our soybeans.”

Mark Albertson, director of strategic market development for the Illinois Soybean Association, said his members are also waiting before they celebrate.

“It is pretty murky, but we’re cautiously optimistic,” he said. "We’re definitely withholding our deeper enthusiasm until we see actual sales … This is a lot of talk, but to be honest, there’s been a lot of talk before.”

Albertson said there is a way for China to make substantial purchases while the 25 percent import tax remains in place.

“When soybeans are purchased to go into (China’s) state reserve system, those are exempt from tariffs,” he said.

And China may well need to replenish its stocks with a fresh infusion of imports. That’s because the government recently has been opening its strategic stockpiles of soybeans to help domestic livestock operations cope with being virtually cut off from U.S. supplies as the trade war between the two countries drags on, according to an analysis by USDA’s Foreign Agriculture Service.

“This year has seen higher than usual sales from the state soybean reserve, with the Chinese government organizing 19 auctions for accumulated sales of 1.92 million metric tons as of Oct. 24,” FAS said in the report.