New disclosure requirements finalized by USDA for biotech foods will mandate the use of the term "bioengineered" while providing a key exemption for ingredients such as vegetable oils, sugar and other foods where the genetically altered DNA of the GMO crop can’t be detected.

The requirements, which will be enforced starting in 2022, also will exempt foods that contain as much as 5 percent of a bioengineered ingredient that the manufacturer can prove was sourced as non-GMO.

USDA released two symbols for bioengineered foods that companies can use on labels. One symbol is for products on which disclosure is required, while the other, which includes the words "derived from,"" is for companies that want to disclose the exempt ingredients. The symbols can be used in full color or black-and-white display.

The mandatory compliance date is Jan. 1, 2022, but companies can start using the symbols and following the disclosure requirements starting next month. "There is nothing to prevent them from starting" before 2022, a USDA official said.

A law that Congress passed in 2016 to preempt state GMO labeling laws mandated companies start disclosing biotech food ingredients but allowed them to do it via electronic codes, such as QR codes that can be read by smartphones, rather than listing the ingredients on the labels themselves. 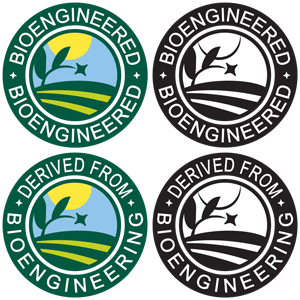 USDA was left with discretion to decide key details of the disclosure requirement, including what foods could be exempted, how inadvertent amounts of biotech ingredients would be treated, and how small companies would have to comply.

Exempting highly refined ingredients from disclosure when the DNA of a biotech crop can’t be detected "hews closely to the plain language" of the 2016 law, USDA officials said in the 239-page final rule released Thursday. Companies were given different methods of proving that biotech DNA couldn't be detected in an ingredient. The vast majority of U.S. corn, soybean and beet sugar production is genetically engineered to resist pests or tolerate herbicides.

An earlier version of the rule left open the decision about how those ingredients would be treated and also raised the possibility of a lower threshold of 0.9 percent for inadvertent contamination. That was ultimately rejected in favor of the 5-percent limit.

“A threshold amount of 5 percent allows BE and non-BE production systems to coexist, whereas a lower threshold, such as 0.9 percent, may increase the regulatory burden for producers and food processors,” according to the rule.

"Any disruption or increased burden on the food supply chain may unnecessarily increase the cost of producing food, and that cost may ultimately be passed on to consumers.”

Companies with less than $2.5 million in annual sales won’t be required to use an electronic code but could instead label products with a phone number that consumers can use to get information about BE ingredients.

Zippy Duvall, president of the American Farm Bureau Federation, said the rule was "a victory not only for consumers who want transparency but for the entire food value chain, from the farmer to food manufacturers. It provides clarity to the marketplace so that consumers can make informed decisions on the issues that matter to them, and protects the innovation that is critical to the sustainability of agriculture."

But Thomas Gremillion, director of the Food Policy Institute at the Consumer Federation of America, said the way that USDA is implementing the disclosure law will erode consumer confidence. Among his group's concerns is that USDA exempted refined ingredients and mandated the use of "bioengineered" rather than more familiar terms such as GMO or genetically engineered.

"There are some bright spots. USDA will not allow food manufacturers to rely on ambiguous statements that foods 'may be” the product of genetic engineering. And the bucolic ‘BE’ disclosure symbol will at least include the word ‘bioengineered’ within it. Overall, however, the rule lets down consumers,” Gremillion said.

"We remain concerned, however, that the standards fall short of consumer expectations, and the practices of leading food companies, particularly when it comes to how we are already disclosing highly refined ingredients and the threshold for disclosure," the group said. "Our member companies will continue to take strong, proactive steps to meet consumer expectations for transparency - and we encourage others in the industry to do the same."

ASA president Davie Stephens of Kentucky said the regulations will provide “transparency for consumers while following the intent of Congress that only food that contains modified genetic material be required to be labeled bioengineered under the law, with food companies having the option of providing additional information if they choose."