Peter Berthelsen, program director for Bee & Butterfly Habitat Fund (BBHF), says his company is just a bit player in the network of pollinator help organizations that have flowered throughout North America in the past couple decades.

Berthelsen, a North Dakotan promoting his nonprofit’s pollinator forage services at the National Association of Conservation Districts convention in San Antonio on Sunday, says one sign of the elevated attention to honeybee habitat and forage is this: “In two years, there will be more registered apiaries in North Dakota than people ... about 850,000 registered apiaries,” he says.

Campaigns to expand habitat and protect health of many kinds of pollinators were already on the move, for example, when the Pollinator Partnership and North American Pollinator Protection Campaign were launched about 20 years ago.

But, Berthelsen says, Americans started paying more attention to the decline of pollinators when colony collapse disorder, which affects honeybees, hit the media in 2006. 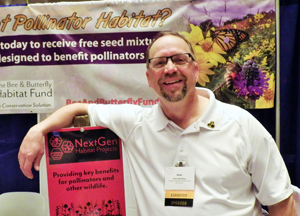 Countless organizations and local, state and federal agencies have since stepped up to promote pollinators. Pollinator enhancements are in several other NRCS programs and are often part of the whole-farm Conservation Stewardship Program contracts with farmers and beginning farmer grants.

Working near Berthelsen’s exhibit, William Finch, a resource team leader for NRCS in Texas, noted, for example, that a lot of farmers and ranchers include pollinator habitat development in their Environmental Quality Incentives Program projects. “It can be part of the (EQIP) plan or it can be just what they want to do — they can just be pollinators,” he says. “We are in the corridor for the monarch butterfly ... (and) the I-35 highway corridor is one of the areas we are trying to pollinate.”

Honey producers, meanwhile continue to fight against heavy seasonal bee losses. An update on nationwide colony losses will be reflected later this year when full results are reported for USDA’s annual honeybee pests and losses survey, conducted by the University of Maryland. Samples are still being gathered.