Ag PAC dollars on the rise in 2018 election cycle

The 2018 midterms were notable for a variety of reasons — shifting Washington to divided government and a bipartisan wave of new faces coming to town, to name a few — and ag, food, and select energy political action committees reached deeper into their pockets than ever before to edge their way into the conversation.

According to a study 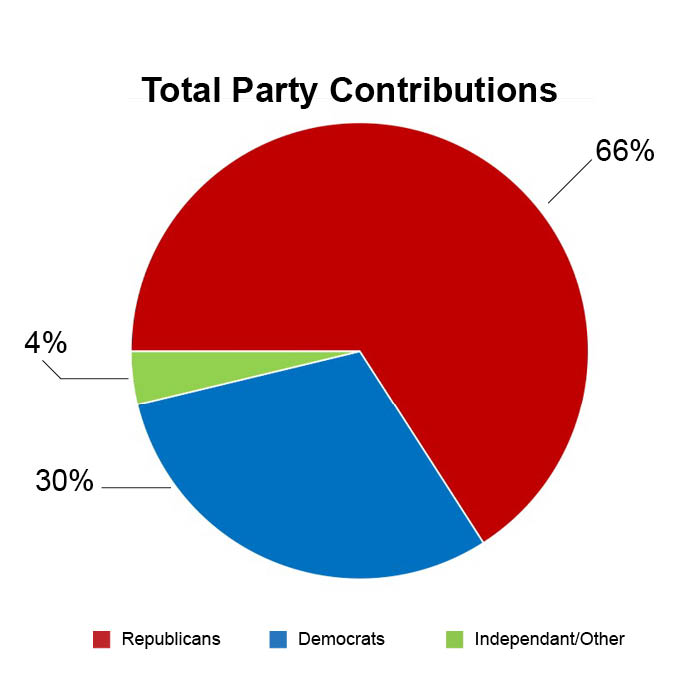 of contributions from 238 PACs collected by the Center for Responsive Politics and analyzed by Agri-Pulse, American ag interests donated over $38.5 million in the 2018 election cycle, with the majority of giving headed toward the Republican Party. The top names include some of the most familiar names in farm policy, and a closer look at some of the trends shows a few races didn’t quite go the way the ag money may have hoped.

The top individual recipient was Texas Republican Mike Conaway, pulling in just under $600,000. At the time of the election, Conaway chaired the House Agriculture Committee and was in the process of drafting what would become the 2018 farm bill with the lead negotiators from the House and Senate ag panels.

One of those lead negotiators, Senate Ag Committee Ranking Member Debbie Stabenow, D-Mich., was the top recipient in the Senate. Stabenow, who was up for reelection in the 2018 cycle, collected a little over $461,000 in contributions.

Both Stabenow and Conaway were also the lead recipients in the Agri-Pulse analysis of contributions to that point in June, but both added a sizable amount of money — Conaway an additional $121,000 and Stabenow in the ballpark of $185,000 — to their collections before Election Day.

While PACs and campaign financing can frequently fall victim to visions of smoke-filled rooms and shady dealings, lobbyists tell Agri-Pulse their campaign spending can often give them a chance to explain the nuances of farm policy in a less-stressful environment. Lawmakers can be a little more 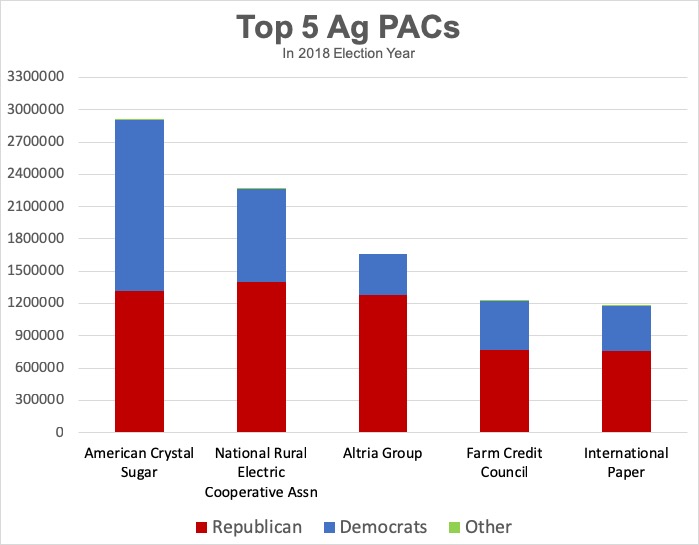 chatty — and have a little more time — at a fundraising event than in their Capitol Hill offices.

The final total giving based on party affiliation closely mirrors what was observed in June: Republicans received roughly 66 percent of the overall giving, Democrats pulled in 30 percent, and independent or nonpartisan (such as giving to another organization’s PAC) candidates and causes rounded things out at 4 percent.

As for the top PACs in the 2018 cycle, American Crystal Sugar once again leads the way. The Minnesota-based cooperative threw just under $3 million into the election fray last year. The National Rural Electric Cooperative Association was next in line at $2.34 million, the only other PAC on our list to top the $2 million mark. Rounding out the top five was tobacco company Altria Group ($1.75 million), International Paper ($1.26 million) and the Farm Credit Council ($1.23 million). Those five PACs were also the only ones to top $1 million in giving.

Conaway, Stabenow top recipients of rural PAC contributions
PAC money slowed, but not stopped, during COVID-19
CEO salaries were on the rise. Then came COVID-19.

Some other noteworthy trends in this year’s PAC report are also revealed in a deeper dive into the figures.

All five of the top Senate candidate recipients were women, and three of them were Democrats. In addition to Stabenow, more than $265,000 was also offered up to Nebraska Republican Deb Fischer. Mississippi Republican Cindy Hyde-Smith, who faced a special election to hold onto the seat once held by Senate stalwart Thad Chochran, brought home $263,000. Presidential hopeful Sen. Amy Klobuchar, D-Minn., was given more than $261,000 for her Senate reelection campaign. Rounding out the top five on the Senate side was Heidi Heitkamp, a North Dakotan viewed as a vulnerable Democrat in her effort to keep her seat, was given just over $230,000 by ag PACs in what would ultimately be a losing effort. 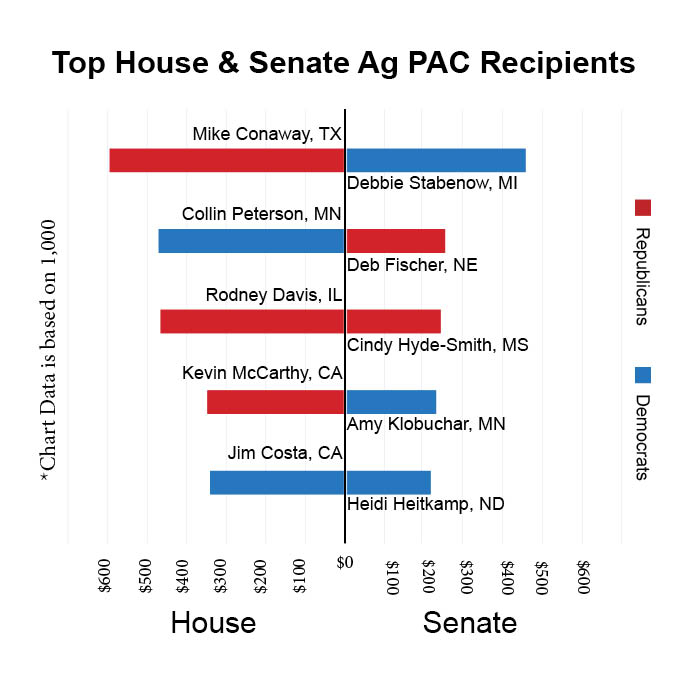 Of note, Heitkamp’s challenger, Republican Kevin Cramer, collected less than one-quarter of Heitkamp’s haul ($55,000). In June, a well-placed individual with a top-five PAC said many ag groups were worried about the plight of moderate Democrats like Heitkamp, Indiana’s Joe Donnelly, and Missouri’s Claire McCaskill, who all suffered defeat at the ballot box and all received more money from the ag industry than their challengers with the exception of McCaskill. Josh Hawley, who would go on to win the Senate seat, received a mere $250 more in ag PAC money than the incumbent Democrat.

For the most part, however, ag was on the winning side of the equation. Colin Woodall, chief lobbyist for the National Cattlemen’s Beef Association, said their analysis found an “85 percent success rate” with their candidates of choice.

“We’re happy with that, very pleased with that,” he told Agri-Pulse. “To see that 85 percent of our money went toward the winner makes us feel very good about our choices.”

With the election in the rearview mirror, the attention will now shift to 2020, a presidential election year with a number of ag-friendly senators on the ballot. Organizations are already fundraising for their own arsenals — Woodall said an auction at the recent Cattle Industry Convention raised about $76,000 for NCBA’s PAC, and that was “just one of about five different fundraisers” the organization had at the event. Similar auctions and dinners will fill calendars all the way to Nov. 3, 2020.

If the 2018 analysis is any indication, the use of PAC funds by ag groups will remain plentiful, purposeful, and very political.