Agriculture, food, forestry and renewable energy political action committee donations in the 2018 election cycle remains skewed heavily in favor of the Republican Party, but in the Senate, two incumbent Democrats are reaping the most contributions.

Debbie Stabenow of Michigan, a three-term incumbent running for re-election and the senior Democrat on the Senate Agriculture Committee, is the top Senate recipient of funds from an extensive group of Political Action Committees (PACs) compiled by the Center for Responsive Politics (CRP) and analyzed by Agri-Pulse. She’s collected about $276,000. Her fellow Democrat Sen. Heidi Heitkamp, who is running for a second term in North Dakota, has received $178,000 in PAC donations from this same group of contributors, while donations to Senate Ag Committee Chairman Pat Roberts, who is not running in this cycle, still received $142,000.

However, Ag Committee Chair Mike Conaway, R-Texas, is the top overall ag PAC recipient at over $476,000, as the Republican bids for an eighth term representing his West Texas district while trying to guide a new farm bill through the U.S. House of Representatives.

Overall, contributions remain in favor of Republican candidates and causes, but a number of Democrats are also major recipients in this year’s analysis, which reflects contributions made in the 2018 election cycle through April 30 and reported by the Federal Election Commission in May. Donations to Republican candidates and affiliated leadership PACs and joint fundraising committees accounted for about 65 percent of overall spending. A marked majority, but down from the 73 percent share commanded by Republicans in 2016 races.

The list of top PACs contains many familiar names, but also a few surprises. American Crystal Sugar is once again the top spender in ag circles, topping $2 million in giving, followed by the $1.67 million doled out by the National Rural Electric Cooperative Association PAC. After that, tobacco company Altria comes in at just under $1 million, International Paper contributed $940,500, and the Farm Credit Council rounds out the top five in giving at more than $771,000. 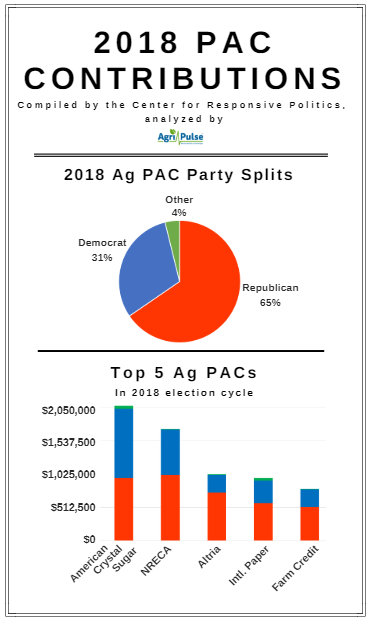 While the figures are based on reports required by law, these data should be viewed with an important caveat: There’s still plenty of time before Election Day, and still plenty of money to be spent.

Farm Credit Council CEO Todd Van Hoose says he thinks “some people may be holding back and seeing where things are. I have a sense that there’s about to be a bunch more money put into this.”

One PAC traditionally among the leaders is employing that strategy. The National Cattlemen’s Beef Association – typically a top-five PAC with stated ambitions of being the largest PAC in agriculture – comes in at 10th in this analysis. NCBA’s Colin Woodall tells Agri-Pulse “as we are finishing up primaries, we will see more giving from an NCBA perspective.” According to CRP, NCBA has more than $416,000 in cash on hand.

Anyone with an interest in farm policy is cognizant of the depressed commodities and declining farm income plaguing farmers and ranchers in recent years, but people close to major PACs say that hasn’t decreased producer support for political causes.

“We make a very simple pitch to our people,” Van Hoose said. “Look at Congress. Look at the demographics. Look at who’s voting, and you very quickly understand that ag’s voice is diminished. We tell people we want to use this PAC to elevate our voice to lawmakers.”

Ag PACs pick up pace of contributions after post-Jan. 6 pause
Ag PAC dollars on the rise in 2018 election cycle
PAC money slowed, but not stopped, during COVID-19

While a PAC contribution can’t guarantee a vote one way or another, it can very frequently supply access to a lawmaker, often at a fundraiser that is more relaxed and less time-crunched than a visit on Capitol Hill might be. For an industry that has fingers in a broad swath of international and domestic issues, that access – and subsequent opportunity for education – can be critical.

“People come in and go ‘Sugarbeets? Never heard of ‘em. Sugar policy? What’s that all about?’” he added. “You need time to sit down with members.”

Want more in-depth coverage? Sign up for your free trial. 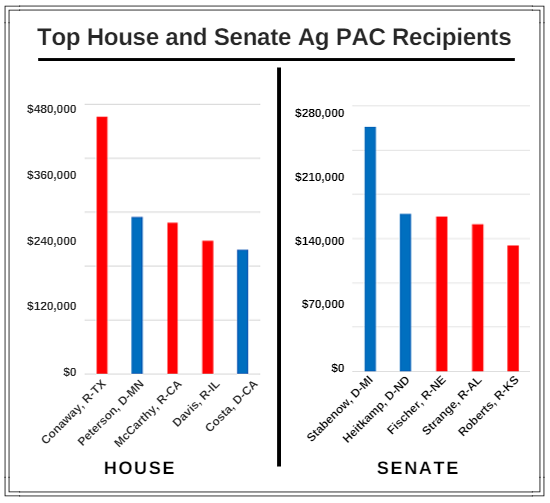 Some of the top recipients are no strangers to sugar policy – or corn, soybean, beef, dairy, or pork policy for that matter. Conaway’s total, at over $476,000, is far and away the largest amount given to any single lawmaker. His committee’s ranking member, Collin Peterson of Minnesota, comes in a distant second at just over $291,000. House Majority Leader Kevin McCarthy brought home more than $280,000, and Stabenow, topping $276,000, was the only other lawmaker to top the quarter-million dollar mark.

The broader political punditry may be predicting a “blue wave” of Democratic newcomers making their way to Washington, but ag PAC leaders say that hasn’t changed their strategy for this year’s campaign contributions. While there is an uptick in percentage of contributions headed to Democrats, that can partially be attributed to a number of vulnerable Senate Democrats up for reelection this year. The same lawmakers that were previously supported are retaining that support, and ag PAC managers aren’t worried about surfing – or stopping – whatever wave comes to Capitol Hill after the election.

To see a complete list of contributions to candidates analyzed by Agri-Pulse, click here. Keep in mind that we’ve included current and some former Senate candidates in the Senate lists.