Haiti’s desperation puts US rice sector in a bind

The island nation of Haiti, rocked by recent violent protests over allegations of corruption, inflation and a flailing economy, needs cheap food, and the country is reaching out to U.S. rice farmers and millers for help.

It was soon after Haiti President Jovenel Moise pledged in a televised address earlier this month that he would not step down amid the turmoil, that his foreign affairs minister walked into the USA Rice Federation’s suite of offices in Arlington, Va.

Minister Bocchit Edmond was on a mission to try to secure cheap food to help quell the hostilities that were spilling out into the streets in the form of riots. With urgent requests for help from the U.S. government so far unanswered, Edmond — together with Haitian Ambassador Hervé Denis — found himself at the Arlington offices, seated across from leaders of the largest association of rice millers and farmers in the U.S.

"We are very appreciative Minister Edmond personally came to brief us on the very serious situation," USA Rice President and CEO Betsy Ward said in a statement after the meeting with Edmond.

While USA Rice’s leaders offered their sympathy, there is little the group can do to help the Haitians, according to industry sources with knowledge of the meeting.

The group was being put in a precarious situation. On one hand, Haiti is the second largest foreign market for U.S. rice by volume, so upsetting the ruling administration could have negative consequences. On the other hand, U.S. rice farmers and millers are commercial operations that cannot survive if they give away their product. 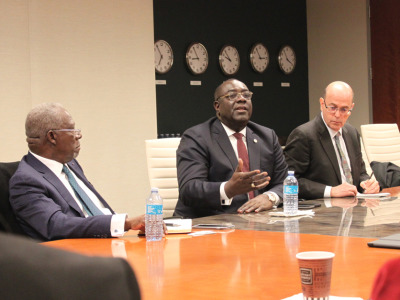 Haitian farmers produce about 80,000 metric tons of rice per year, but the nation needs a lot more than that. Haiti imports about 500,000 tons every year, according to USDA data, and about 90 percent of that comes from the U.S.

The U.S. rice sector “is certainly not in a position to operate in Haiti other than on a competitive basis,” an industry source told Agri-Pulse.

Securing cheap food — rice is present in almost every Haitian meal — is so important to the stability of his country that President Moise made a surprise call to talk to USA Rice leaders and Edmond in the middle to their meeting.

“Even though we do have Haitian importers, we are trying to see if (USA Rice) can talk to different associations or different rice producers and how they can help our importers to get a better weight or price,” Edmond told Agri-Pulse in an interview.

USA Rice was at a loss for a direct answer to Edmond, the minister said, but he admitted his suspicions that the answer will not be what he is hoping for.

What he and President Moise are asking for is that the USA Rice Federation somehow rally its members to come to Haiti’s assistance by slashing their prices and shipping over tons of discounted rice to the government, which would then distribute the grain cheaply.

The idea, Edmond said, is to mollify the population that is struggling to afford fuel and basic food commodities. It’s a simple supply and demand equation, the minister said. If U.S. rice farmers helped flood the country with rice, the cost to Haitians could not help but drop, even during the current ramped-up inflation.

But U.S. rice farmers, millers and the USA Rice Federation cannot legally fix or arbitrarily reduce prices. Sympathies aside, that message was given directly to Edmond during the Arlington meeting, two industry officials said.

“One of the things (Edmond) was told is that under U.S. statute … it is unlawful to collude on prices and so (the U.S. rice industry) cannot come together and say that they are going to cut prices for Haiti,” an industry source said. “It is simply a commercial market.”

And U.S. farmers need it to remain a commercial market and not morph into an “aid” country, another industry source said.

Officials that could help are at the U.S. Agency for International Development (USAID), but the agency would not commit to any food aid beyond what it is already providing “to families severely affected by natural disasters, such as recurring drought and tropical storms.”

One complication, a USAID spokesman told Agri-Pulse, is the agency does not want to hurt local farmers by flooding markets and pushing down prices.

“Our decisions on when, where, and what type of additional emergency food assistance we provide in Haiti are separate and apart from the current political situation,” the spokesman said. “USAID bases its assistance on assessed needs and local context, including detailed evaluations of local market conditions to ensure the interventions are appropriate and do not displace Haitian farmers.”