Strife in Haiti halts once prosperous US rice trade

Haiti has remained a major customer of U.S. rice through decades of turmoil, but that has come to an end. The implosion of the country that has descended into the chaos of gang rule and disease outbreak has made it impossible for U.S. exporters to keep supplying the country even in its time of most dire need.

The U.S. historically exports more than $200 million worth of rice to Haiti annually, making it the largest foreign customer for milled long grain rice, but that commerce has come to a grinding halt after too many ships retreated from Port-au-Prince in August with bullet holes.

The United Nations, the U.S. and other countries are trying to rush aid to Haiti, but the country is running out of fuel and food – as evidenced by the empty warehouses that once supplied rice to the populace.

About 4.7 million people in the country are now facing a "catastrophic" hunger crisis, according to the United Nations.

The UN relies on a numerical scale of one to five – five, classified as "famine," being the worst – to describe a country's hunger levels. About 2.9 million people are in Phase 3 of the Integrated Food Security Phase Classification (IPC), which is characterized by "high or above-usual acute malnutrition."

About 1.8 million Haitians now fall in the IPC 4 category, which means they are “employing emergency livelihood strategies and asset liquidation” to try to survive. Of that total, about 19,000 people in Cité Soleil – a section of Port-au-Prince – are suffering “catastrophic levels of hunger” in IPC 5, a UN spokesman said.

The U.S. hasn’t shipped any rice to Haiti since the end of August, when the violence gripping the country made it too dangerous for ships to even dock in Port-au-Prince, Bobby Hanks, CEO of Louisiana-based Supreme Rice and former chairman of the USA Rice Federation, tells Agri-Pulse.

Armed gangs were robbing trucks full of rice as they moved the grain from ship to warehouse, but that’s not new to Hanks. It was when bullets started hitting docked ships that rice shippers like Hanks knew the situation was just too dangerous. 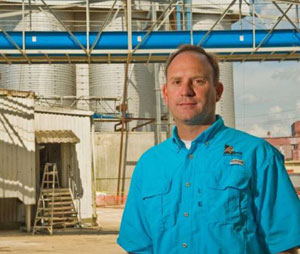 The Haitian gangs, which have been an increasing presence in the city’s streets since even before President Jovenel Moïse was assassinated last year, hadn’t yet invaded the docks in Port-au-Prince when U.S. rice shipments halted in August, but they didn’t need to gain access to stop the commerce.

“They were firing their weapons toward the port and some of the bullets were hitting vessels,” said Hanks.

The situation outside the port deteriorated quickly, preventing any U.S. rice from making it on trucks to warehouses, from which the grain is distributed. Trucks have been robbed of rice before, says Hanks, but not to this degree.

“Our shipments stopped when we weren’t able to distribute it,” he said. “We were getting our rice off the ships, but we were having all of our trucks hijacked … It’s hard to get information out of (Haiti) right now. My best estimate is that all of our warehouses are empty. We have no rice to sell. I know a couple of our customers actually got their warehouses looted, so they have no rice to sell.”

Rosemary A. DiCarlo, UN Under-Secretary-General for Political and Peacebuilding Affairs, said in a tweet, “Gangs have paralyzed the country, triggering fuel, water shortages. Resurgent cholera makes it even more critical to come to Haiti’s aid urgently.”

The Haitian government desperately needs security, and Prime Minister Ariel Henry has called on the international community for help in providing a “specialized armed force.”

Meanwhile, the U.S. State Department, U.S. Agency for International Development, and World Food Program are assessing the situation on the ground and delivering whatever emergency supplies they can.

USAID on Friday announced it was deploying a seven-person Disaster Assistance Response Team (DART) to Port-au-Prince to assess the situation.

“The month-long fuel blockade throughout the country is compounding urgent needs and blocking life-saving humanitarian assistance, including efforts to respond to a burgeoning cholera outbreak,” USAID said in a statement. The team is assessing how “to determine how to deliver assistance to the most vulnerable.”

The shortage of fuel is a dire problem, caused by gangs who are holding the country’s Varreux fuel terminal hostage, says Sen. Bill Cassidy, R-La.

Cassidy, in an op-ed published last week by The Hill, called for the U.S. Mission to the Organization of American States to organize a “multilateral force to maintain order in Haiti.”

“Even if we were able to get rice over there, you need diesel to run the (port machinery),” he said. “There’s no fuel in the country. They operate maybe two or three days a week – opening up and then shutting down.”

Brian Nichols, an assistant secretary for the State Department, led a delegation to Port-au-Prince on Wednesday and Thursday last week, spokesman Vedant Patel said Friday. Nichols met with Henry “to continue to discuss how the U.S. Government can continue to provide not only various forms of assistance but also promote accountability for those responsible for some of the criminal acts that we're seeing.”

On Haiti’s appeal for an international peace-keeping force, Patel said, “We're currently reviewing that. I don’t have any updates to offer. But these things take time, but we remain in close touch with our partners and allies in assessing next steps.”

But Patel also revealed that the U.S. and Mexico on Friday circulated a draft resolution at the United Nations “to enable the Security Council to address security challenges” in Haiti.

Mexican Foreign Secretary Marcelo Ebrard was at the White House Thursday, where he met with U.S. National Security Advisor Jake Sullivan. They discussed how the two countries can “work together to address the humanitarian and security crises in Haiti,” according to a White House statement.

But until some security is restored and the country gets access to fuel, Hanks says the rice warehouses and berths for vessels carrying imports are likely to remain empty.

“It’s always somewhat chaotic in Haiti, but this time it’s different,” he said. “There’s no longer a functioning government that can keep people safe and keep commerce in motion. It’s a pretty bad situation.”