Science is key to agriculture, but often missing from the legislative discussions impacting the industry. As a scientist, Assemblymember Bill Quirk, D-Hayward, understands the challenge of describing complex research in a way that policymakers can quickly grasp.

Before retiring into a political career at the capitol, Quirk was a climate scientist at NASA and Lawrence Livermore National Laboratory and taught at Columbia, Caltech and UC Davis. He is recognized for having influenced the Comprehensive Nuclear Test Ban Treaty and helping to find a solution for Rocky Flats as the facility threatened to spread plutonium oxide over Denver. Quirk currently chairs the Environmental Safety and Toxic Materials Committee.

Quirk spoke with Agri-Pulse about the politics of science, agriculture’s role in mitigating climate change and the challenges of working with the industry. The conversation has been edited for brevity.

How does your background as a scientist help as a lawmaker?

I find what the background does, first of all, is it gives you the ability to read a scientific paper in which you’re not the expert. My expertise is in astrophysics and nuclear weapons design. That doesn’t come up too often in legislation. But it’s also a great training over the years for trying to hone in on what the key question is that you have to ask. I’m good at trying to get through the maze of people’s minds to what is the key question.

I was also our country’s expert on foreign nuclear weapons programs. So I was doing intelligence analysis. They teach you a way of describing what you have learned in a simple way. They want you to explain your conclusion, the what and the why, in one sentence. Then do it in a paragraph. Then do it in a whole paper. Because chances are, most decisionmakers just read the first sentence.

Why did you decide to get into politics?

I’ve always been involved in politics. Politics is just how we manage to get our way through life. Everybody does politics every day. Whether it’s getting along with your spouse or your boss or the organization you work in, you’re doing politics every day…

But I’ve done it my whole life. While I was at Lawrence Lab, there was a deadlock in the negotiations for the Comprehensive Nuclear Test Ban Treaty. And I was among those who was doing nuclear testing. Anyway, I figured out a way around the deadlock. I briefed DOE on a Tuesday and a Wednesday. They briefed the White House over the weekend. We changed our position on a Monday and signed treaty by the next Saturday…

In politics, what you try to do is develop a consensus. The happiest thing you could ever say when you’re on the floor asking for a vote on your bill is: “All opposition has been dropped.” You do try to reach a consensus.

You also worked in climate modeling. 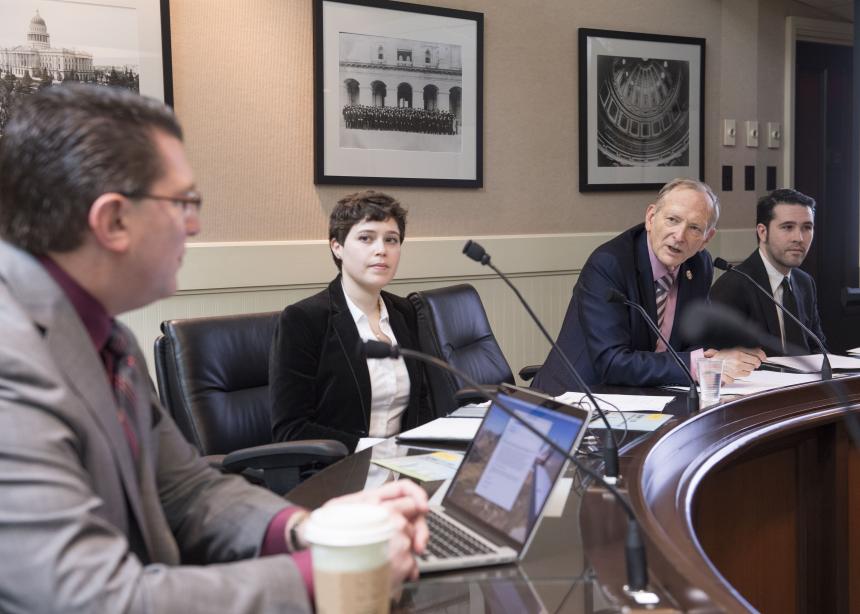 Oh sure. I worked on NASA’s first climate model and I wrote some of the key papers early on. In particular, one was showing that the biosphere had a feedback onto the atmosphere. We were looking at drought and overgrazing. What we showed was if you overgrazed a region and got rid of all of the plants, then you didn’t get evapotranspiration into the atmosphere. So by overgrazing, you made things drier. The whole idea was that we trying to explain that there was a feedback… It’s fairly complex, but what we were seeing is that certain clouds would disappear as it gets warmer over time and you could get what’s called a spike. Right now things are rising quickly, but they could absolutely spike in 50 or 100 years.

When we looked at things in the 70s, we way overestimated how much carbon dioxide would go into the atmosphere. Even so, we way underestimated the effects. The problem is much worse than we ever thought it would be. And everything we keep doing shows that over time things are going to get worse still. And we have idiots who won’t believe it.

The ag industry can be a positive force. The industry can actually sequester carbon, particularly with minimal till.

Do you think ag and the state should do more to mitigate and adapt to climate change?

With mitigate, it’s one of the few places it can be done, to absorb carbon out of the atmosphere. They’ve tried carbon sequestration from power plants. It’s very expensive. This you can do by changing the type of farming you do, particularly for rangelands. I think it’s well worth doing and have incentives for.

What other messages do you have for the ag community?

Well it’s certainly the ag community that’s going to suffer most from greenhouse warming. First of all, pests that would ordinarily have died in cold winters don’t anymore. It warms up the nights more than the days, so you don’t get the frosts that can kill pests. Also, with forest fires, one of the reasons they’ve become more catastrophic is that we don’t get dew at night the way we used to. When there was dew, we put the fire to bed. Without that, firefighters cannot contain the fire as easily.

And of course, it changes the crops you can grow. And heat stress is certainly a major issue. So I would say agriculture suffers the most, but on the other hand, has the greatest potential, if we could change worldwide farming practices to actually sequester carbon and slow down the process…

I was on the Ag Committee for five years, because I have great interest in it. It’s the bedrock of the California economy… Myself, Dr. Pan and the republicans, in my opinion, were able to stop some very bad bills that were based upon bad science. In particular, we stopped lessoning the criteria for safety of milk. People from smaller farms wanted a weaker criteria on unpasteurized milk and we just did not feel it was appropriate.