Cecilia Aguiar-Curry grew up with a father who taught high school agriculture in Yolo County. He later bought a 40-acre ranch, keeping the family in the farming business for the next 50 years.

“I was raised with agriculture around me from day one,” says Aguiar-Curry.

She had the trust of farmers when she ran for office in 2016, winning the Assembly seat for the 4th District. She now represents Napa Valley’s top vineyards, as well as Delta farmers, Sacramento Valley rice growers and the nation’s top ag school, UC Davis. Her district is also buffered by Bay Area tech culture on one side and the capital on the other

Assemblymember Aguiar-Curry spoke with Agri-Pulse on the challenge of representing so many interests as a Democrat, on her disappointment over Senate Bill 1 to protect federal environmental laws, and on her bills that passed and those that didn’t.

Here's my dilemma: My district is so diverse. My farmers down in the Delta were definitely telling me, “We like SB 1.” My farmers in Northern California, and in other counties, were saying, “No, we're totally against it. It's going to unravel so many things.”

I always go to my industry leaders that I trust and that I work with. I talked to the Yolo County water agency and to (Reclamation District 108). I went all over the place to be sure of what people wanted and what they didn't. Still, I was in the middle. What in the world am I going to do?

My vote did not come up until after it had gone through. I stayed off the bill completely, because I wanted to see where it went. Once it got passed, I honored leadership at that point and said later on I would go up on the bill.

I will admit I was really upset when I heard he was going to veto the bill. If I had known that or had known what he did and didn't like about it, I would have attacked this differently. I spent weeks trying to figure out where I was going to go with the bill.

Those are hard bills to take and there's going to be people who hold it against me. But I really did my homework on it.

My bet is there are. But everybody realizes you don't get married to your bill and you move on.

I have hundreds of bills I’ve got to go through. I rank mine and this was one of the top ones that I knew was going to be a tough decision. I spent a lot of time and my staff spent a lot of time on it. I had industry in and out of (my office). I had personal friends in the farming business come by or call me.

I would hope that we sit at the table way before with both sides. Workshops work really well over at the capitol. With both sides of the aisle sitting there, we talk about different issues, and we bring in industry leaders to talk. The environmentalists and labor would also come.

When you have all that information and we're all sitting there talking about it, the conversation is much different, instead of just hating the bill. When you collaborate, the outcome is much better.

I'm sure we'll see many more water bills in the next 8 to 10 years.

I also sit on the Delta Caucus. We need to sit down and begin our deliberations on where we would go if something new came up. 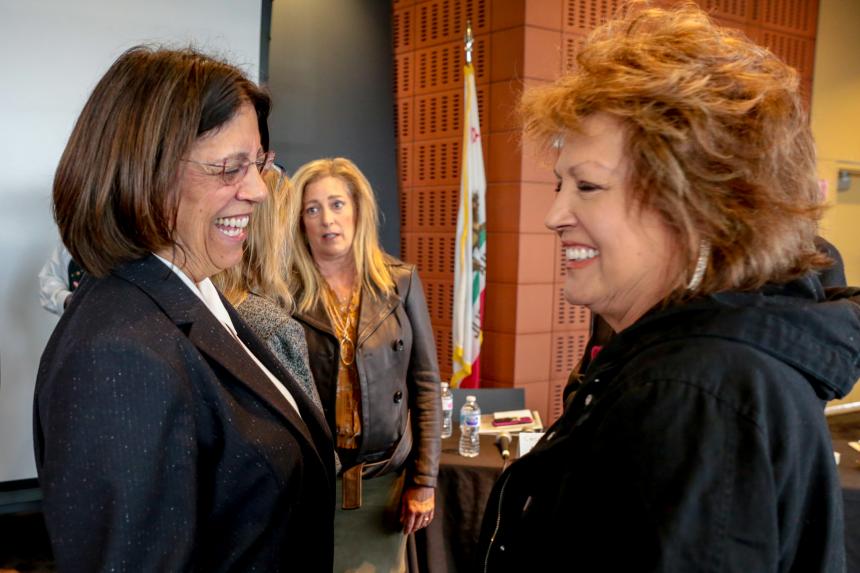 Asm. Aguiar-Curry at a Wine Select Committee hearing in 2018.

I thought it went well, all things considered. We knew the difficult bills early on.

I really concentrate on my district and I concentrate on rural communities. Their voices are always at the table. Although I'm a Democrat, I really watch out for my conservative farmers and agriculturalists at the same time.

I'm the only female farmer north of Stockton. With my Central Valley people, we all work together as much as we can. But when you start looking at the number of votes, they are really in L.A. and the Bay Area. So, my goal is always to educate my colleagues from areas that are not familiar with agricultural issues. When they come and ask me about a bill, I always ask what the unintended consequences are that could happen to my region.

For me, my bills went through and we worked really hard to dot the I’s and cross the T’s. We had 24 bills on the governor's desk and 10 of them have been signed. Most of them are rural issues, like telehealth and telepharmacy and some stuff on fire.

Yep, that's a good one. I love that bill. I got so excited about that bill. And my very conservative people loved it. We were talking with UC Davis. My environmental groups got involved in it. We got the farmers involved and the rice people. It was a fun bill.

I'm going to try to bring it back. It’s frustrating.

The idea was just to make sure that we get the retailers taken care of. We want some labeling on the hemp. Let's face it, it's everywhere. You can buy it even in CVS and farmers markets.

The frustration was that I asked people to be at the table and they didn't come until the very end, including the governor's office and the Department of Health. The bill went through lickety-split. Everybody agreed that this bill needed to go through. We decided to divide it up into two bills at the end. Then they held my bill. But I'm not done.

Well, I’ll do cleanup on CBD. I'll continue to do something with healthcare, with the aging master plan.

I'll be doing some stuff for the wine industry (on limiting air emissions through closed fermentation). That's the frustrating one, because so many of my wineries have open-air fermentation. What works in one area does not necessarily work in others.

I'm afraid the Air Resource Board will mandate this all the way through the state. And that's not going to work for me. Hopefully I'm going to get a study on this through UC Davis. If the data says it needs to be closed, great. Then we'll work on it. But it's an incredible cost to the farmer.

Yeah. You always know that you can use them. As a capitol, we should be using them a lot more. They're only 11 miles away.

My frustration is, before my time, they did a dairy bill on methane (SB 1383 by Senator Ricardo Lara, D-Long Beach). I questioned whether he had ever been to a farm or a dairy and really understood the story.

So when I got here, I went right over and found Frank Mitloehner (a UC Davis research professor and specialist in livestock air quality). He's great. I said, “Tell me about it,” and he gave me this whole PowerPoint.

I'm doing a big project for Clear Lake, in trying to figure out how to make it look clear. We have a contract with UC Davis and they're doing a lot of testing for me and they’re doing an economic development study. Everybody's fingers are in this trying to figure out Lake County. Some of the farmers are upset because people say it's their fault because pesticides and herbicides are going into the lake. I think it's mainly just that it's a shallow lake and it's on volcanoes.

We make so many regulatory issues for organics. They have minimum wage, ag overtime, all these things – it all stacks up. The cost of the products is so much more. Then you're getting the stuff in from Mexico and Argentina with the same California Certified Organic label. This is not fair to these guys that are trying to sell the product. That's what got me going on the school food program.

I'm going to do another one next year, and I'm going to probably expand it to hospitals and maybe the prison system. California grown should be sold here in California.

There's nothing more frustrating than that bill going down. Hundreds and hundreds of people were behind it. Tom Steyer was behind it. The Appropriations chair said to me, “You have too many good bills.”

I did it through CDFA and didn't go through the Department of Education because I knew (CDFA Secretary Karen Ross) would watch over it better. That one I thought for sure we would get through.

I would hope we can continue to move bills along. During an election year, some people are frightened of their own shadow when it comes to legislation and policy.

I was elected here to do a job. I don't have any other dreams to go anywhere else. Some of the younger legislators are looking for the next job. They're more frightened about taking a hard vote. I get that. But sometimes you have to take a hard vote for the whole state. I did that with SB 1 and I did that with (extending cap-and-trade in 2017). But I did a lot of homework, had working groups and felt comfortable on my votes.