Japan and the U.S. appear to be moving quickly on a free-trade agreement, but U.S. ag groups from across the country are pouring on the pressure for negotiators to move in a hurry.

The urgency lies in the fact that every day, U.S. farmers, ranchers, packers, vintners and bakers are losing sales to Japan as foreign competitors lock in new business under preferential conditions.

The Trump administration has promised to move expeditiously, perhaps even securing a quick, ag only, deal with Japan and ag groups joined together this week to demand that officials like U.S. Trade Representative Robert Lighthizer follow through. The message is clear: The U.S. ag sector wants equal or better tariff terms than competitors in other countries that already have free trade agreements with the Japanese.

“In recent weeks, Japan cut tariffs for the second time on agricultural imports from the European Union and (Comprehensive and Progressive Agreement for Trans-Pacific Partnership) member countries,” the groups said in a letter they sent Monday to Lighthizer. “As a result, U.S. exporters of wheat, beef, pork, dairy, wine, potatoes, fruits and vegetables, and other products are facing collapse of their Japanese market share as these lucrative sales are handed over to their competitors.”

Take for example beef: Japan maintains a 38.5 percent tariff on U.S. beef, which is also subject to higher tariffs if trade increases quick enough to set off a trigger. If the U.S. had remained in the Trans-Pacific Partnership (now renamed and known as the CPTPP), that tariff rate would have eventually gone down to 9 percent and the trigger would not apply. For other countries like Australia and Canada, the tariffs are already declining, giving them a sales edge over the U.S.

“The U.S. pork industry cannot get a free-trade agreement with Japan implemented fast enough,” said Nick Giordano, a trade lobbyist for the National Pork Producers Council. “We have a serious problem. We’re losing sales in Japan.”

Japan is the largest foreign market for U.S. potatoes, and the Asian country buys about $325 million worth of potato products. Under TPP, Japan had agreed to remove its 8.5 percent tariff on bulk shipments of frozen french fries.

“The Administration must recognize the urgent need to negotiate a bilateral agreement with Japan that restores access and expands opportunities for American agriculture,” said National Association of State Departments of Agriculture CEO Barb Glenn. “The increasing levels of disadvantage our producers are facing in the Japanese market have them facing yet another degree of uncertainty in their business. Maintaining, expanding, and obtaining market access for U.S. ag should be of top priority for the Administration and Congress.” 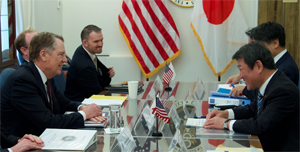 As it is now, the U.S. is playing catch up. Official negotiations with Japan only just began last week when Lighthizer met with Japanese Economy Minister Toshimitsu Motegi, but Japan’s other free trade agreements have already been in effect for months.

US, Japan agree to free trade agreement talks
US dairy left out as Japan embarks on new trade deals
US and Japan reach deal on ag trade

“Our agreement with Japan must include market access provisions that at least equal the terms of the CPTPP and the EU-Japan EPA in the first stage of implementation, and where possible build upon those precedents,” the groups and companies told Lighthizer. “Further, the agreement must include an accelerated phase-in of tariff cuts to ensure the U.S. is not facing a disadvantage on tariff … access compared to other countries.”

Trade deals can take years to finish, but much of this one is essentially already done if negotiators use the U. S-Japan portion of TPP as a foundation. That, together with the fact the overall U.S.-Japan relationship seems to be strong, should provide some comfort to U.S. farmers and ranchers.

Japan played hard to get for a long time after President Donald Trump pulled the U.S. out of TPP early in 2017, but Prime Minister Shinzo Abe — under threat of automobile tariffs — finally agreed last September to negotiate. Now the process appears to be gaining momentum.

Motegi is expected to accompany Abe to Washington this week, although spokespersons for the Office of the USTR have not confirmed that. If he does, that will be two consecutive weeks of talks.

But Abe and Trump are also expected to focus on trade during the prime minister's visit on Friday and Saturday.

“The two leaders will also explore ways to advance their shared vision of a free and open Indo-Pacific region, including steps that will strengthen our bilateral trade and investment relationship,” a White House spokesperson said.

Then Trump, together with the first lady, will travel to Japan. Trump’s visit will be special, said Japanese Foreign Minister Taro Kono, who addressed reporters last week together with U.S. Secretary of State Mike Pompeo. Trump, Kono said, will be “the first state guest after the accession to the throne of our new emperor.”

After the accession ceremony, Trump and Abe are scheduled to hold a “bilateral meeting.”

The National Pork Producers Council on Friday said it “continues to urge the Trump administration to expeditiously negotiate access for U.S. pork that is equal or better than the access extended by Japan for pork from the CPTPP nations and the European Union. U.S. pork producers are losing market share in Japan to these competitors.”