Africa’s uneasy history with agricultural biotechnology can be summed up by what’s growing, and not growing, on a small research farm in central Malawi, one of the poorest and most food-insecure countries on the planet.

Two varieties of genetically engineered black-eyed pea plants are growing in a small plot, surrounded by a low brick wall. The project was launched in 2016 with funding from the U.S. Agency for International Development’s Feed the Future initiative and managed by a local scientist, Kingdom Kwapata, who returned to his native Malawi after earning his Ph.D. in plant genetics at Michigan State University.

Known in Africa as cowpeas, these plants are resistant to a major insect pest called pod borers that can reduce yields by 60 to 80 percent.

The idea behind the biotech version, which has a similar Bt gene as the insect-resistant corn and cotton that dominate production in the United States, was to produce a high-yielding crop for Malawi’s smallholder farmers to export. (The southern African country, which is about the size of Indiana in land area, with nearly three times the population, currently exports relatively little other than tobacco.)

But under pressure from a coalition of environmental organizations and other anti-biotech groups, the Malawian government has blocked Kwapata from taking the next step toward commercialization of the crop, conducting field trials at four sites around the country. USAID, which had provided $750,000 for the project, will cease funding it, a State Department spokesman said in a statement to Agri-Pulse.

“There are some people who feel that cowpea being a food crop, maybe we shouldn’t be doing this type of research,” said Kwapata. 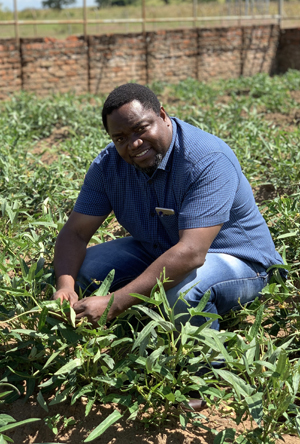 Kingdom Kwapata with his Bt cowpeas.

So, Kwapata has turned to a second project using a plant breeding pioneered in the 1950s but generally abandoned by plant breeders because it’s so cumbersome: Irradiating seeds to produce random mutations, a process known as mutagenesis, that can then be assessed for potentially useful traits. The goal of the project, which is supported by the International Atomic Energy Agency, is to breed drought-tolerant plants that are more resistant to climate change. IAEA, which irradiates seeds for Kwapata, also maintains a database of mutant plant varieties that breeders can use.

Watch Dr. Kwapata talk about his work with Bt cowpeas here and with mutant soybeans here.

Mutagenesis is slow and inexact. Irradiated seeds often don’t germinate, and once a desirable trait is identified in the mutant plants it can take years to breed plants that have all the other traits needed to make them commercially useful.

The challenge Kwapata faces is obvious in the small fields where he has planted irradiated corn, peanut and soybean seeds, just outside the enclosure where his biotech cowpeas are growing.

On a day in April, as Malawi’s dry season was beginning, the field where the corn was planted is nothing but weeds. For the second time in a row, none of the seeds that the IAEA irradiated for him have germinated. The peanut and soybean fields are doing a little better; here and there a few of the mutant plants are growing. He’ll use the surviving plants to identify prospects for further breeding.

“It’s not as precise as GMO. But in the interim that’s what I have,” Kwapata said of his experiments with irradiated seeds.

Mutagenesis is considered a form of conventional breeding, not just in Malawi but in the United States as well, making it suitable for breeding even organic crops.

But Patrick Schnable, a leading authority in corn genetics who directs Iowa State University’s Plant Sciences Institute, said mutagenesis is a very difficult to tool for breeders to use, especially for complex traits such as drought tolerance, a trait that is controlled by multiple genes in a plant.

“It’s like taking a hammer to (a) car and hoping something you smash or break might make the car better,” he said of mutagenic breeding. “You could imagine that you could somehow hit the car and make it better but it’s a long shot.”

A 2016 study by the National Academy of Sciences, noted the irony in regulating crops produced through genetic engineering but not mutagenesis.

“Some emerging genetic-engineering technologies are likely to create new crop varieties that are indistinguishable from those developed with conventional plant breeding, whereas other technologies, such as mutagenesis, that are not covered by existing laws could create new crop varieties with substantial changes to plant phenotypes,” the study said.

Another irony, as Kwapata notes, is that genetic material for breeding drought tolerance has been available in Africa for the last decade as the result of a donation from the Monsanto Co. under a project known as Water Efficient Maize for Africa, or WEMA.

That trait could be combined with the Bt insect-resistant gene to address another major problem in Malawi and across Africa — a moth larva known as the fall armyworm, which was first detected on the continent in 2016. It is easily controlled with Bt corn varieties in the United States.

At least 20 percent of the corn in many sections of Malawi was infested with armyworm in 2018. Some of those areas of the country have been spared this year, but infestations still exceeded 40 percent in some southern areas of the country, according to the UN Food and Agriculture Organization.

The armyworm and climate change are both urgent challenges for Malawi. An estimated 41 percent of Malawi’s population was food insecure in 2018, according to USDA’s Economic Research Service, and the population is expected to reach 27.5 million by 2028. (Texas, by comparison, has a population of 28.7 million.) Climate forecasts suggest dry spells will become more frequent in Malawi, where the impact of one drought-induced famine is dramatized in a recent Netflix film, "The Boy Who Harnessed the Wind."

Malawian farmers are fighting the armyworm infestation with a combination of synthetic pesticides, which the government has been stockpiling, and a variety of concoctions, according to an FAO expert. Farmers near Lake Malawi, for example, coat corn stalks with a fish soup, which attracts ants that can eat the armyworm larvae.

Biotechnology still has a toehold in Malawi as well as a few other countries, especially through cotton, a non-food crop.

The Malawian government has approved the commercial production of Bt cotton, which was tested in the country by Kwapata’s father Moses. Father and son both do their research at the Lilongwe University of Agriculture & Natural Resources south of the county’s capital. Some research on a virus-resistant banana also continues in the country.

The objections of biotech opponents in Malawi can be hard to pin down. “There is still no evidence GM is safe” to eat, said Bright Phiri, a lawyer who leads an environmental group called Commons for Eco Justice, part of the coalition that filed objections to the cowpea trials.

But the coalition also objects to the cultivation of Bt cotton, saying that farmers who don’t want to grow it won’t be able to keep the biotech gene out of their crops and that the crop will inevitably lead to Bt-resistant insect pests.

When asked about mutagenesis as a breeding method, he said that his coalition’s objections “only start where there is transfer of genes between species,” which rules out Bt crops. The Bt gene originates in a bacterium. But even though gene editing methods such as CRISPR-Cas9 can transform plant traits by turning a plant’s own genes off and on, Phiri isn’t ready to endorse that technology either. 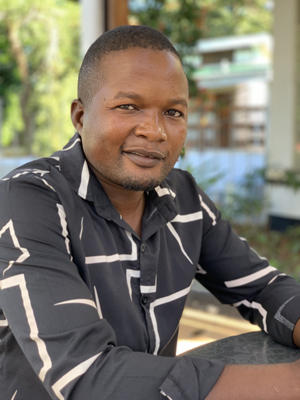 The path forward for genetically engineered crops elsewhere in Africa is uncertain at best.

South Africa has been growing biotech corn for years, Sudan produces Bt cotton commercially, and Nigeria, the most populous African country, is moving toward commercial cultivation of Bt cowpea, its first biotech food crop, although there is still opposition from some organizations. The crop is being tested in national trials this year, and the sponsors will apply for commercial release in January 2020, says Issoufou Kollo Abdourhamane, who manages the project for the African Agricultural Technology Foundation

Africa’s second largest country, Ethiopia, is testing Bt corn for the first time as a result of the armyworm outbreak, and genetically engineered cotton was ready for commercial production this year. The cotton is seen as key to supplying Ethiopia’s rapidly growing textile industry, according to USDA’s Foreign Agricultural Service.

But there is still strong resistance to genetic engineered seeds in major countries where corn also is a staple for the population and drought and armyworm are major threats, including Kenya and Tanzania. And Burkina Faso, one of biotech’s first beachheads on the continent, has phased out Bt cotton.

“They will all backtrack at some point, it’s just a matter of how far back they go,” said John McMurdy, a former research adviser for USAID who has watched the fits and starts with biotechnology in Africa.

He said Malawi was seen as being one of the most promising countries because of its relatively progressive regulatory program. Cowpeas were never going to be a lucrative business for seed companies. Cowpea is a self-pollinating crop, like soybeans, so farmers could easily save seeds from one crop to plant the next.

The State Department statement said USAID would work with the Malawian government "regarding how best to move forward with Bt cowpea trials, as well as the commercialization of other Bt crops."

Kwapata said the U.S. decision to stop funding the cowpea project was a further blow to the technology. He was already concerned that confidence in biotechnology had been dealt a blow with the successive verdicts by U.S. juries linking glyphosate herbicide to cancer in people who have applied it. Malawi recently banned import of the chemical.

Biotechnology "is a very difficult area to pursue in this part of the world, and with USAID pulling out it makes this effort almost impossible to win," Kwapata wrote in an email after Agri-Pulse informed him of the agency's plan. "Nevertheless we will continue to pursue all means available until all options are exhausted."

For more news, got to www.Agri-Pulse.com.