Despite aid package, farm groups look for solutions on trade

There were plenty of smiles and hurrahs at the White House last Thursday when Trump met with leaders of some of the largest farm groups to publicly unveil the assistance. However,  those same officials expressed as much uncertainty as cheer after the meetings that ended up with a photo opportunity in the Oval Office.

“We will ensure that farmers get the relief that they need and very, very quickly,” Trump said in the Roosevelt Room, standing among farm state lawmakers, Ag Secretary Sonny Perdue, and representatives of the American Farm Bureau Federation, National Association of Corn Growers, American Soybean Association, International Dairy Foods Association, USA Rice Federation, California Almond Board and more. “It’s a good time to be a farmer. We’re going to make sure of that.”

It’s a big promise as the U.S.-China trade war continues, there is still no clear path forward on the U. S-Mexico-Canada Agreement in Congress and Japan’s recent free-trade agreements with the EU and Pacific Rim countries put U.S. exporters at a disadvantage.

Payment rates for the row crops that make up most of the commodities covered under the direct payment portion of the new aid will be based on the impact of tariffs on individual counties, but USDA is not saying much officially beyond that. 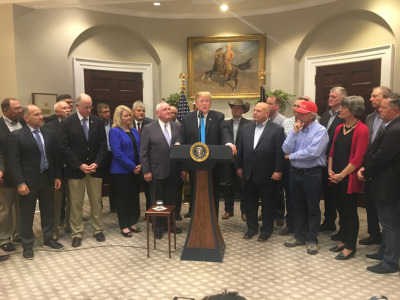 Unofficially, government officials tell Agri-Pulse that USDA is using multiple statistical models to look at the direct and indirect impacts of tariffs on individual commodities, then applying those impacts on planting in counties to come up with payment rates for each county.

Government officials say USDA is clamping down on the details to try to prevent farmers from planting crops now based on what aid payment rates they might get, but tensions in the department are especially high after “inaccurate” news reports of specific payment rates for soybeans, corn and wheat.

USDA has not confirmed any specific rates have been assigned to individual commodities as it calculates county payment rates, but National Corn Growers Association President Lynn Chrisp told Agri-Pulse he believes USDA will agree that the trade damage to corn farmers is higher than previously calculated.

Corn farmers, under the $12 billion trade mitigation program that was unveiled last year, got 1 cent per bushel.

“We’ll know in a couple weeks, I’m sure,” Chrisp said as he exited the White House meeting last week. “There’s a lot of details that need to be fleshed out in the next few weeks. All we have is the press release that USDA gave out.”

“We’re certainly happy something was announced … but it’s still a short-term fix (and) we really want to move into a long-term relationship that stops the tariffs and gets trading back to normal,” Stephens told Agri-Pulse. 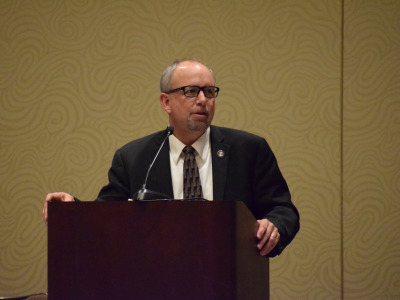 The U.S. exported $3.1 billion worth of soybeans to Chinese importers in the 2018 calendar year, about a quarter of the $12.3 billion it sold to them in 2017, according to USDA data.

Another big question left open by USDA is how many payments farmers will get. Of the $16 billion, the direct payment portion will be, at most, $14.5 billion, and that will be split up into three tranches. The first tranche is set to go out in June or July, but there’s no guarantee there will be any more after that.

Will it be a third of the $14.5 billion that goes out soon? More or less? USDA isn’t saying, but there will be more farmers divvying up the totals — whatever they are.

Amid all the uncertainty of how much aid is really in the trade assistance package is the remaining uncertainty about the future of the Chinese market.

U.S. Trade Representative Robert Lighthizer and Chinese Vice Premier Liu He appear to be at an impasse in the negotiations to end the yearlong trade war, with no future rounds of trade talks scheduled, but it’s not all bad news.

Trump’s trade war is at another low point for negotiations, but China appears to be willing to capitulate in Geneva over two key U.S. ag trade complaints. It was during the final months of the Obama administration that the U.S. sued China in the World Trade Organization over the country’s failure to enact tariff rate quotas as its price supports.

China’s long-standing policies of propping up its grain farmers with artificially high prices and its failure to make the purchases it promised have cost U.S. farmers hundreds of millions of dollars in sales, according to farm groups.

China has now lost both cases, and on Tuesday its representatives at the WTO pledged they would not appeal the decisions.

The U.S. applauded China’s decisions not to appeal, but officials said they will be monitoring China’s actions closely to see whether it conforms with the rulings of the WTO dispute panels.

“We stand ready to agree with China … on the reasonable period of time to implement the (WTO dispute panel’s) recommendations,” the U.S. said at the WTO Tuesday