For the second month in a row, agricultural producer sentiment experienced a big decline, erasing all gains recorded following the November 2016 election and indicating weaker expectations for the future. That’s according to the Ag Economy Barometer, an index based on a survey of 400 agricultural producers each month by Purdue University and the CME Group.

The barometer declined 14 points in mid-May to a reading of 101, down from 115 in April. But the results were captured as producers struggled with a soggy planting season and before the Trump administration announced plans to make a second round of market facilitation program payments.

"Ag producers are telling us the agricultural economy weakened considerably this spring as the barometer has fallen 42 points (29%) since the start of this year," said James Mintert, director of Purdue University's Center for Commercial Agriculture. "Farmers are facing tough decisions in the midst of a wet planting season and a lot of uncertainty surrounding trade discussions."

Regarding whether they ultimately expect an outcome favorable to U.S. agriculture, 77% of the respondents said “yes” in March, which declined to 71% in April, and fell further to 65% in May.

Mintert says a majority of producers still expect a favorable outcome to the trade dispute with China, but that majority appears to be shrinking. 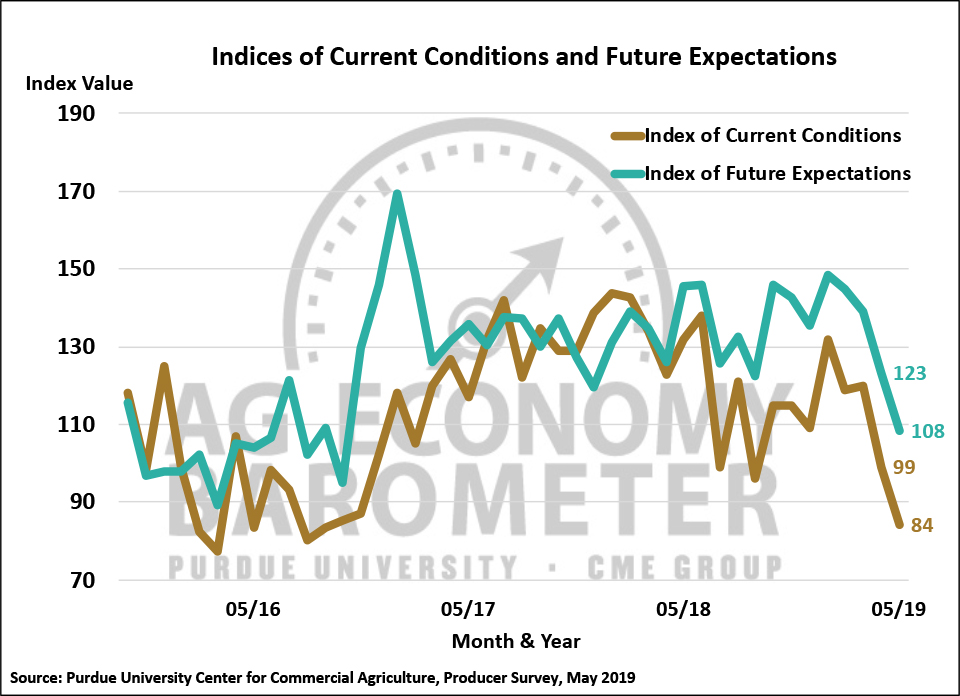 The decline in the barometer came about because producers' perspectives on both current and future economic conditions worsened considerably compared to a month earlier. The Index of Current Conditions fell to a reading of 84, down from 99, and the Index of Future Expectations fell to 108, down from 123.

The Large Farm Investment Index, which measures producers' attitudes toward making large investments in their farming operation, has ebbed and flowed over the past year, but since the beginning of 2019, the index has trended significantly lower.

In May, just 18% of farmers stated it was a "good time" to make large farm investments while 81% stated it was a "bad time," pushing the investment index down to a reading of 37. This is the lowest Large Farm Investment Index reading since the Ag Economy Barometer's October 2015 inception.

Read the full May Ag Economy Barometer report at https://purdue.ag/agbarometer.