When relentless spring rain and flooding across so much of the nation’s midsection kept farmers from planting their 2019 corn acres, it also threatened the crop of seed corn for 2020 plantings.

That’s because the fussy process of crossing hybrids to produce seed for premium high-yielding corn varieties happens primarily in the same regions where most of commercial corn is grown: the Corn Belt and eastern Great Plains. This year, a National Weather Service rainfall map shows most areas in those regions have received 125 to 300 percent of normal rainfall during the past 60 days.

According to the most recent USDA Crop Progress report, 94% of the corn planted this year had emerged by June 30, but last week's Acreage report knocked 1.1 million corn acres off a March estimate. That number could be further reduced by an update to be released in August.

Even so, seed growers have likely dodged the high-water threat though seeding was thwarted in many plots intended for growing seed corn this year.

Gro Alliance, an independent corn and soybean seed company with corn seed tracts in Wisconsin, Iowa, Illinois, Michigan, and Indiana, had a tough go of it well into June, “as most of the Corn Belt did,” observes Jim Schweigert, the company’s president.

Excessive rain through the middle of May, especially, “backed us up a couple weeks,” but by this week “every acre that we intended to plant for seed corn has been planted,” he reports. 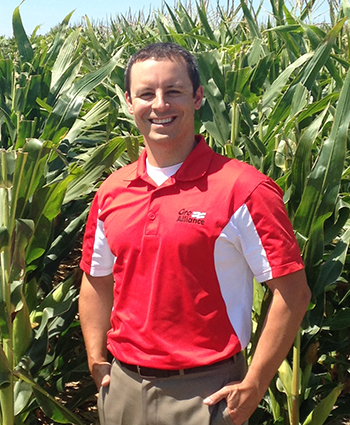 Likewise, Scott Stein, Bayer corn systems business representative for the U.S., says growers for Bayer brands across the Midwest “have been able to weather the storm, so to speak, as best as one could expect.”

In fact, Stein says, “the planting progress for our seeds that we will sell next year … has outpaced … the commercial corn planting that farmers do for grain” as reported by USDA planting surveys.

Nathan Fields, National Corn Growers Association vice president for production and sustainability, agrees. Typically, producing seed corn “is reserved for some of that prime ground so you can have some guaranteed production,” he says. That’s the case, too, in Nebraska, he says, where there’s less rain and seed is raised on irrigated tracts “so you have control over the amount of water the crop receives.”

First, they can grow additional bushels in South America or Hawaii over winter for 2020 U.S. plantings. U.S. farmers need about 30 million bushels of seed to plant corn crops (about 3 acres per bushel of seed on average). USDA trade data shows they have imported in a broad range – from less than 4% to about 18% of seed corn used annually — depending on needs for added bushels and to meet demands for specific seed varieties and traits.

Gro Alliance, which also conducts seed development and production in Chile, and most seed corn producers “are comfortable with where their seed production acres are,” Schweigert says. He believes most seed growers “are waiting to see how this crop plays out before doing a lot of contracting for the counter season (in South America).” Still, he says, “there probably will be some (winter production of) hybrids just to make sure they have sufficient supplies.”

Similarly, Bayer’s Stein says, “at this point in time, we’re feeling OK,” and, so far, “we don’t anticipate the need to augment our production plans substantially” through production abroad.

Yet Fields predicts “more South American seed production” this winter for 2020 plantings “if some of the fields in Nebraska and other regions couldn’t get their seed corn plots in.”

Thomas Capehart, a USDA economist focused on crops and trade, shares that feeling. The corn seed imports from Brazil and South America overall dropped sharply in 2018, owing largely to short corn stocks in Brazil and demand to produce corn for ethanol there, he reports.

So, especially compared with 2018 volume, “I would say we’ll see large imports” from South America for the U.S. 2020 crop, Capehart told Agri-Pulse in an email.

“With the number of acres that probably won’t be planted this year,” says Fields, “you’d guess next year there’s going to be a pretty robust supply (of 2019 seed) out there.” He notes that “if you store it in the correct conditions it will still be a good, viable seed for the next year.”

Schweigert says the volume of 2019 seed left sitting with seed dealers will vary among locations, in part by how much farmers return to the dealers rather than store it themselves.

The heavy rains’ biggest impact on seed: lighter bags in 2020, Schweigert expects. Late planting of so many seed corn tracts means “the maturation process is going to be shorter … so I don’t think the seed corn is going to accumulate the test weight it usually does.” He suggests, however, that “germination should be fine; it’s just that the bag of seed would be a little lighter.”

U.S. farmers will expect to seed around 90 million corn acres next spring, with choices to make toward selecting strains. Often, for example, identical premium hybrids are sold under more than one label.

Schweigert’s advice to farmers: “Visit with your seed company about key hybrids and ask whether they got their target number of acres planted for those hybrids … and stay in touch with seed sales reps on production and supply picture.”