Republican Senator Jim Nielsen of Gerber first ran for office more than 40 years ago. Nielsen spoke with Agri-Pulse about the changes he has seen over that time with agricultural issues at the capitol.

Nielsen was raised on the family dairy operation in Sanger. He switched to the west side of the valley to be a ranch foreman and then shifted to ag consulting in Woodland before running a cogeneration plant that burned rice hulls for electricity.

He said he took leave of his senses in 1978 and ran for State Senate, serving 12 years. He then raised “kids and cattle” and took over the toughest job he would ever have, as head of the state parole board. He served in the Assembly beginning in 2009 and returned to the Senate in 2013.

Among its 19 Northern California counties, Nielsen’s Senate District 4 includes the town of Paradise, home to the most destructive wildfire in state history in 2018. A year earlier, an emergency spillway on the nearby Oroville Dam began crumbling, leading to a mass evacuation. Nielsen related both events to the impacts wildfire and neglected infrastructure have on agriculture.

Agriculture was a diminishing voice then and it is still as diminished now. We fight back and fight hard and we succeed in some things and in some things we don't succeed.

Agriculture is not as revered and respected and certainly it's not as represented since 1964’s “one man, one vote” decision of the (U.S. Supreme) Court. It collapsed the balance of rural counties having fairly equal representation in the Senate.

I was elected the first time in the year that Jerry Brown was reelected (governor) the first time. We immediately began fighting over the medfly (outbreak) and the Peripheral Canal. He and I laugh about that. He smiled one day and said, “Well, you licked me on both of them.” I laughed and said, “Well, yes, Governor, maybe for 35 years I've been ahead of you on it. But invasive species are still a problem and the Peripheral Canal is now the Twin Tunnels.”

The biggest challenge for our industry now though is the regulatory morass that we have to contend with. And it's built up through many agencies, state and federal. By the way, my motive to run for the legislature was driven by the fact that I realized my greatest problem to produce in agriculture was government. It was not the weather. It was not bugs. It was not the cost or employees. It was the vicissitudes of government.

…Government now is a power unto itself. It is a fourth branch of government firmly ensconced in power. In this budget that has just passed, it gains more power beyond the control of the people and even their elected representatives… This is all agencies, not just those affecting agriculture. They proffer regulations, not through the administrative hearing process, which is a formal process that I helped invent some 40 years ago, where at least the public has some input. But rather just by edict. They put out a memo and that becomes effective law. 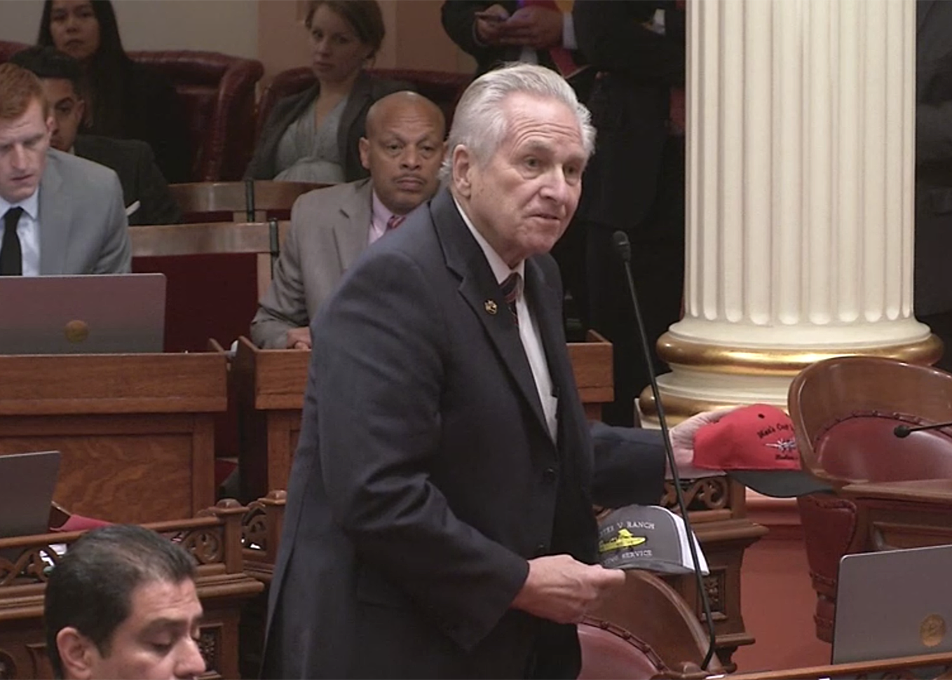 On the Senate floor, Nielsen holds up hats from crop duster companies involved in a crash.

Now we've paid the price. With the mass accumulation of fuel, the magnitude of the fires is so much greater.

The difference is these fires have gotten so huge and move so fast that they now have encroached on urban areas, like Northern Santa Rosa, like Santa Barbara. It used to be just a problem for the rural areas… Now it's moved into the cities. They've awakened and we now have some new allies.

…This destroys the watershed, the retention ability of the soils. It hurts long-term through erosion, not just for a few years. And, of course, it's hard on wildlife and habitat, grazing capacity, carrying capacity of the ranges and everything else.

You can't argue habitat anymore, because I’ve finally been able to disabuse the environmental community that they're helping wildlife. They're not. They're destroying wildlife. So that's been bringing forth a new ally.

Over the decades, timber has been pretty well run out of California as a business. We've lost the capacity to harvest and process as well. The same has happened in terms of cogeneration, another good way to get rid of biofuel. We don't have the investment in infrastructure that we had long ago.

For the first time since the State Water Project, we are now going to be able to have some significant surface water storage.

Another thing that happened too is related to the Oroville Dam spillway failure, which was a product of 50 years of neglect of maintenance by the Department of Water Resources. Assemblymember James Gallagher and I have got legislation that requires the department to further test all dams in California.

If you do not have a conveyance system that works, then you may as well not have the storage… Over the decades, we've let habitat grow up and clog those very important facilities to store water. And it impedes their ability and jeopardizes the levees and can result in flooding.

…The 2009 Water Plan crafts policies that ensure that everything in water in California is not about the Delta. It had become, over decades, that everything related to water was solely about the fixing the Delta. That was a failed policy. Now we are recognizing it is not just the Delta – that is the heart of water. But the heart means little if you don't have the blood to go to the body, which is California… We're paying a lot more attention to the totality of the issue in this state.

To the Republicans, don't be dismayed by our low numbers. What you have got to do – and I say the same to rural representatives, both Democrat and Republican – is you just have to fight harder, fight smarter and you have to seek alliances. That's what we did in the Water Plan. We sought new alliances. For example, the farmworkers became great allies, from the standpoint of jobs and improved jobs for them.

There are fewer of us in the legislature who are from agriculture. There are only maybe three or four of us now in the Senate that have ag backgrounds or affinities. We still can be an effective voice. That's what we've had to learn to do. We have to fight more expertly. We have to fight harder. And we have to seek out new alliances.

Each of us who care about agriculture need to spend some of our time every day being aware of the issues that affect us and standing up, being involved and doing something about it. Part of our agricultural day has got to be devoted to political awareness and involvement. That's what affects our ability – and will for generations – to be able to farm. We have to stand up and be counted.