On the heels of the Department of Agriculture submitting a rewrite of rules to address competition in livestock markets, a group of producers took to Washington Tuesday to make their case for improved safeguards in the new rulemaking.

The Organization for Competitive Markets and the Rural Advancement Foundation, International-USA, held a press conference and hill briefing Tuesday on just what they say is at stake for producers as the Trump administration considers its options in rewriting the so-called “GIPSA rules.”

“My opinion has always been that the government is the court of last resort, but unfortunately that’s where poultry farmers are,” Craig Watts, a former contract poultry grower from Fairmont, N.C., told reporters in Washington.

Watts and other current and former producers said the relationship with their respective integrators — the company providing the chicks, feed, and veterinary care to contract growers — has become more and more strained as growers feel forced into costly repairs and upkeep and fear retaliation for speaking publicly about their frustrations. Several of the producers who spoke to the media said they were forced into bankruptcy after struggling as contract growers.

“We’ve lost the ability to pay our bills and raise our family,” former law enforcement officer and chicken farmer Tony Grigsby said through tears at the event. “Too many farmers are losing too much.” 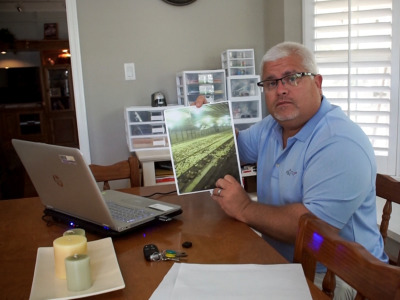 In a recent email to Agri-Pulse, Tom Super, a spokesman for the National Chicken Council, said the “vast majority” of chicken farmers report being happy, and “broiler farmers are one of the only sectors in American agriculture right now that are currently in the black and maintain one of the lowest loan default rates in all of agriculture.”

Nevertheless, the producers offered a starkly contrasting view of the current state of contract growing. They also suggested some specific requests as USDA and the White House iron out final details of their proposal to address anti-competitive practices in the livestock sector.

RAFI-USA’s Sally Lee says the group will push for protection from retaliatory practices such as providing contract growers who speak publicly about their frustrations with lower quality chicks and feed. She says farmers should also have the protected right to assemble and discuss their misgivings with contract growing, which can include a so-called “tournament system” for payment.

The tournament system groups together producers in a given region and ranks them by production, offering a bonus to the higher-performing growers and a penalty to those on the lower end of the spectrum. Lee says the current system is “very opaque” and needs more transparency.

They also dismissed concerns from protein sector groups that a rewrite of the rules would lead to a flood of legal action against meatpackers.

“Companies that are doing the right thing are not going to have any problem with this,” Lee said.

Al Davis, an OCM board member and Nebraska cattle producer, also suggested the regulation include language stating “all producers who produce differentiated products can receive a different price.” Some groups argue the Obama administration’s GIPSA rules would have precluded premium pricing for qualifiers like cage-free or organic products.

A new GIPSA proposed rule is expected to be released by the fall.