The U.S.-China trade war just intensified with new and increased tariffs hitting both sides on Sunday. As the tariff tit-for-tat shows no sign of abating during warnings of economic recession, Democratic presidential hopefuls are raising alarms and lashing out at President Donald Trump’s handling of the dispute that’s expected to escalate even further next month.

President Trump just this weekend said his bailout funds for the U.S. ag sector will make it better off than when trade was flowing normally to China, but American farmers and manufacturers are growing increasingly worried and the Democratic candidates are pouncing.

“President Trump may think he’s being tough on China, (but) all he has delivered as a consequence of that is American farmers, manufacturers and consumers losing and paying more,” former Vice President and front-running Democratic candidate Joe Biden said in an August speech. “His economic decision-making is short sighted … and so is the rest of his foreign policy.”

Trump has vacillated lately between claims that China is ready to capitulate and warnings that China will hold out until after the 2020 election, while farmers are tiring of the dispute that is drastically cutting exports. The latest Chinese retaliation — a 5-10% increase in tariff rates on $75 billion worth of U.S. goods — went into effect on Sunday and impacts a wide variety of farm commodities.

That offers new ammunition to Democratic candidates like former Texas Rep. Beto O’Rourke, who recently laid out a trade agenda that highlights ending “the trade war with China by eliminating the Trump tariffs. In exchange, China would revoke its retaliatory tariffs on American products like soybeans, beef, cars, and planes.”

But O’Rourke, like Biden, is walking a thin line when it comes to China. The country has been vilified for years for both stealing U.S. intellectual property as well as trying to force U.S. companies to hand over technology in exchange for doing business there. That’s why the candidates, while voicing strong opposition to Trump’s tactics, are careful to also promise they will take a tough stance on China.

O’Rourke, an early favorite after nearly taking Republican Ted Cruz’s seat in the Senate, has had a weaker showing in the polls than many expected, but he came on strong last week against Trump’s trade war. He’s promised to end the tariffs on his first day in office, but still remain tough on China.

On one hand, Trump’s tariffs “have been a disaster for American farmers and ranchers, destroying their long-standing relationships with customers abroad and forcing many family farms into bankruptcy,” according to an online missive posted by the candidate. But on the other hand, he stresses, China’s abuses must be confronted, primarily through the World Trade Organization.

“Well, we have a lot of different forms of leverage in the relationship,” Buttigieg said recently on CNN’s State of the Union. “But it's also a fool's errand to think you're going to be able to get China to change the fundamentals of their economic model by poking them in the eye with some tariffs … I was just in Iowa in rural parts of the state talking with a lot of farmers, who — many of whom are Republicans or supported this president, and are now asking the question, how much longer are we supposed to take one for the team? The president has said repeatedly that he's on the cusp of getting a deal. The president has failed to deliver a deal. And I expect he will continue to do so.”

Massachusetts Sen. Elizabeth Warren, who has been moving up in opinion polls, says — like Trump — she’ll take on China for manipulating its currency, but she also makes clear she would be far less likely to depend so heavily on import taxes. 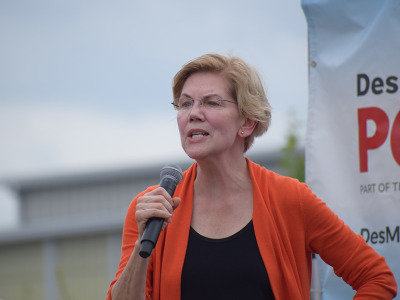 “We’ve let China get away with the suppression of pay and labor rights, poor environmental projects and years of currency manipulation,” she said in an essay on trade. “All to add some zeroes to the bottom lines of big corporations with no loyalty or allegiance to America. And unlike Trump, while I think tariffs are an important tool, they are not by themselves a long-term solution to our failed trade agenda and must be part of a broader strategy that this Administration clearly lacks.”

Candidate Bernie Sanders, the independent senator from Vermont, hews closer to Warren’s views, but he often reminds reporters that he was against normalizing trade with China in the first place. Echoing Trump, Sanders said in a recent NPR interview that the U.S. got snookered when it agreed to allow China into the World Trade Organization. Trump has similarly criticized the deal as weak, allowing China to take advantage of the U.S.

And while China is now the primary front of Trump’s war to cut the U.S. trade deficit, he has also been threatening and levying tariffs on Canada, Mexico, India, Japan, South Korea and the European Union.

Biden’s solution is essentially an alliance with the European Union, which has which has also complained heartily in recent years over China’s intellectual property theft.

“We need to get tough with China,” Biden said in a New York speech. “If China has its way, it’s going to keep … robbing U.S. firms … and we need to build a united front of friends and partners to challenge China’s abusive behavior.”

Trump continues to take the opposite stance, while threatening new tariffs on the Europeans.

“For all of the ‘geniuses’ out there, many who have been in other administrations and ‘taken to the cleaners’ by China, that want me to get together with the EU and others to go after China Trade practices remember, the EU & all treat us VERY unfairly on Trade also. Will change!” Trump said in a tweet Tuesday.

A Democratic congressman from Iowa who is not running for reelection, Dave Loebsack, admits that the Democratic prescription for handling China may not move the Chinese either.

“I believe we should have started at the World Trade Organization and gradually ratcheted up the pressure, if need be. … And we should have gotten a number of our allies, especially in Europe, on board as well. I don’t know that it would have been successful, but it hasn’t been successful the way the president is doing it either,” said Loebsack, talking to reporters at the Iowa State Fair where most of the candidates were campaigning last month.

Many of the Democratic candidates also oppose another method of bringing China to heel, the 12-nation Trans-Pacific Partnership negotiated under President Barack Obama. The TPP was designed to isolate China economically, but Trump withdrew the United States from the TPP and even Biden now says it would have to be renegotiated before the United States would join the deal in its new form.

Foreign allies and major trading partners are lining up to volunteer to work with the U.S., says Glauber, but Trump continues to levy tariffs unilaterally — an act that violate WTO rules.

“Here we are on one hand complaining that China doesn’t follow the rules, but our reaction is to break the rules ourselves,” he said. “I think it’s a big mistake.”

The U.S. recently won two major cases at the WTO against China’s domestic farm supports and failure to enact tariff rate quotas. On Monday, China filed an official complaint to the WTO over the latest U.S. tariffs on billions of dollars of Chinese imports.

Trump declared on Sunday that America’s farmers are not suffering because of the trade war. Despite the massive losses in exports, Trump’s two bailout packages worth a combined $28 billion are insulating them from harm, he said.

“I’m making the farmers more than whole,” Trump said. “The farmers are doing better than if China, frankly, were buying.”

But that’s not the message coming from the U.S. ag sector.

“While the latest Chinese tariffs are no surprise, they are no more welcome than before,” American Farm Bureau President Zippy Duvall said in a Tuesday statement. “The Trump Administration must focus on keeping the negotiations with China on course to resolve this trade war.”

The National Pork Producers Council says the latest Chinese tariffs helped push import taxes on U.S. pork up 72%, assuring that American exporters will lose out on the major opportunity being created by the spread of African Swine Fever through China.

And Democrats like Buttigieg have been responding to the rising concern on farms and ranches.

“When it comes to rural America, I think, to (Trump), it's just the scenery that he sees out the helicopter window on the way to his golf course,” said Buttigieg. “And when it comes to American consumers, he is completely out of touch with the impact it's going to have on the prices we pay for our goods as a result of a trade war in which both sides will lose.”

Phil Brasher contributed to this report.