The Democratic presidential candidates are rallying around a carbon tax as a central method of curbing climate change, but putting the idea into law will mean overcoming concerns of farm groups about the tax’s intended goal — raising the cost of fossil fuels.

The candidates are fuzzy about the details of the tax they want, including the companies and sectors on which it would be directly levied. There are a multitude of proposals already out there for how to structure such a tax, and what to do with the revenue.

Some proposals call for refunding the money to consumers in some fashion or for directing the money toward purposes such as incentives for carbon-conserving practices on farms.

In any case, economists across the ideological spectrum have long argued that a carbon tax would be the most efficient way for the United States to reduce greenhouse gas emissions.

Massachusetts Sen. Elizabeth Warren explicitly endorsed the carbon tax for the first time during a seven-hour town hall that CNN aired Sept. 4 with 10 of the candidates. 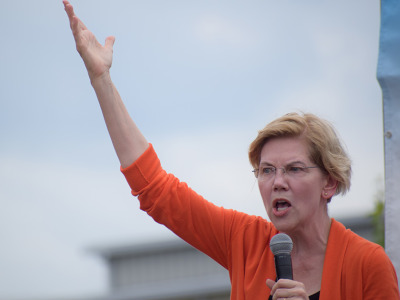 Frontrunner and former Vice President Joe Biden also endorsed the idea of a carbon tax, and Vermont Sen. Bernie Sanders said, “If you are in the fossil fuel industry, you're going to be paying more in taxes, that's for sure.”

But if the tax works the way it’s designed, it won’t just hit refiners and coal companies, as some of the candidates seem to suggest, it will also fall on consumers and businesses. The idea is to push utilities to switch from coal and natural gas to renewable power and to entice motorists and company fleets to buy more fuel-efficient and electric vehicles.

The problem for agriculture is that the tax could increase the cost of a range of inputs, including electric power, natural gas-based fertilizers, and the diesel fuel and propane needed to run machinery, trucks, irrigation pumps and other equipment. Farmers will spend nearly $35 billion on fuel and fertilizer this year, about 10% of their total production expenses, according to USDA’s Economic Research Service.

Marc Hafstead, an economist who directs a carbon pricing initiative at Resources for the Future, says there are ways to soften the impact on farmers.

Some of the tax revenue also could be returned to farms and rural communities to offset the impact of increased energy costs, he said.

According to a report by the Congressional Research Service, a tax of $25 a ton of carbon emissions would generate about $100 billion in revenue the first year, and raise the price of gasoline about 8%, or 23 cents a gallon based on average fuel prices between 2013 and 2017.

A $50 per ton tax would raise more revenue but have a significant impact on fossil use, lowering coal consumption by at least 40% and boosting wind energy usage by as much as 300%.

But Debbie Reed, executive director of the Coalition on Agricultural Greenhouse Gases, which represents food companies, conservation groups, universities and some farm groups, warns that agriculture “would feel the pain” of a carbon tax and could face blowback if the sector seeks to be exempted.

“While subsidies or refunds from the tax revenue could offset that impact, it is worrisome to think that ag would have to then pursue ample refunds or subsidies to ensure the sector remained whole, financially. That battle could become a constant battle,” she said.

She noted the sector came under fire for seeking special provisions to offset the impact of the cap-and-trade bill that passed the House in 2009 only to die in the Senate.

“Some of the headlines were about ag being 'the pig at the trough, seeking beneficial treatment', while completely ignoring the fact that every other sector of the economy had already negotiated silver linings behind closed doors — everyone except ag,” she said. “That possibility is very real. Ag in the cross-hairs is not a welcomed outcomes of any carbon approach; a carbon tax presents a very real danger for that.”

The nation’s largest farm group, the American Farm Bureau Federation, successfully fought the 2009 legislation and also has opposed the carbon tax because of the potential impact on production costs.

John Newton, the group’s chief economist, said the group is open to the government using economic incentives to reduce greenhouse gas emissions. Conservation programs already do that by idling land and subsidizing resource-conserving equipment and practices. “What we’re opposed to is an outright tax on carbon that would increase farmers' input costs.”

It’s important that any legislative efforts to reduce carbon emissions compensate farmers for existing practices, such as cover crops, conservation tillage and precision agriculture, not just additional measures they may take, Newton said.

“We’re not starting from zero. People think we are, we’re not,” he said. “We’ve got to find a way to find credit for things that people have been doing done for decades to sequester carbon and conserve natural resources."

Dan Lashof, director of the World Resources Institute's U.S. operations, says farmers have numerous opportunities to use conservation practices that could reduce the impacts of any tax. He mentioned using solar and wind, and replacing old, fossil-fueled equipment with electric vehicles. "In the long term, as farm equipment is replaced, farmers are going to see a lot of advantages to electric farm equipment," Lashof said.

Farming that sequesters carbon — through use of cover crops, for example — can allow producers to qualify for payments through a credit-trading system, he said. In addition, there is talk of generating ammonia fertilizer not from natural gas, but by extracting hydrogen from water and then reacting it with nitrogen from the atmosphere. Australia is looking closely at using that process to produce ammonia.

Several of the candidates have included in their climate plans major increases in funding for farm bill conservation programs, including the Conservation Reserve Program, Environmental Quality Incentives Program and Conservation Stewardship Program.

Sanders wants to pump nearly $25 billion into CSP, the Agricultural Conservation Easement program, and the Regional Conservation Partnership Program, which together are slated to receive less than $11 billion over the five years of the 2018 farm bill. Warren has called for spending $15 billion a year on CSP, which is now funded at $1 billion annually.