As much as growers long for an end to the trade war with China, there are long-term threats to demand for corn, soybeans and other crops that economists say could depress commodity prices for years to come and lead to calls for higher government spending.

Among the threats: Increased competition from foreign producers and slumping U.S. biofuel consumption due to stagnant usage mandates and a coming shift to electric vehicles. Given those factors alone, “a return to chronic, large U.S. farm surpluses cannot be ruled out,” economists from The Ohio State University and the University of Illinois warn in a new paper.

In the near term, there is the risk the U.S. permanently loses market share because of the trade war. "Ag economists are very worried about the long-term loss of export share because it raises the issue of the reliability of the U.S. as a supplier of food and countries tend to take access to food pretty seriously," said Carl Zulauf, a co-author of the paper who has provided analysis of every farm bill for the last four decades.

He believes the historically huge payments to farmers under the Trump administration’s Market Facilitation Program, created last year to offset the impact of China’s retaliatory tariffs, could lead to pressure on Congress to permanently expand farm bill programs.

There’s precedent for that to happen, he notes. After lawmakers passed successful farm bailout packages in the late 1990s because of a downturn in commodity markets fueled by a drop in Asian demand, Congress created a countercyclical payment program to supplement the fixed direct payments authorized in 1996.

“When you have ad hoc programs … you tend to create a political constituency for those programs to continue,” said Zulauf, a professor emeritus at Ohio State.

Bolstered by the administration’s trade aid, government farm payments will account for more than 17% of net cash farm income this year, according to USDA. (MFP will account for 30% of total farm payments in 2019.) The paper Zulauf co-authored calls MFP the largest expansion of federal farm support since the 1940s.

A separate paper prepared for the Kansas City Federal Reserve by two former USDA economists cites additional factors that could hold down market prices over the next decade and beyond, including lower-than-projected global population growth and slowing soybean demand in China due in part to diets and production efficiencies.

The African swine fever epidemic that has decimated China’s hog production this year, hitting small producers especially hard, “may lead to further consolidation, completing the transition to commercial feeding and improving feed efficiency,” and also leading to a shift to production of poultry, which requires less feed overall, the paper notes.

Longer term, there may not be as many mouths to feed worldwide as some forecasts have suggested. The projections include a variety of possible outcomes, the paper notes. The range in UN population estimates for 2100 vary by 3.3 billion people between the high-growth and low-growth estimates. The low-growth estimate actually shows the world’s population declining after 2060. The paper also suggests levels of meat consumption are likely to vary significantly among countries even as incomes rise.

Shorter term, farmers face increasing international competition in grain, oilseeds, cotton and other crops, and the trade war with China is providing farmers else with new incentives to expand.

USDA’s Economic Research Service expects most export growth over the next 10 years to go to Brazil for oilseeds, cotton and poultry and to the Black Sea region for wheat, said Joe Glauber, a former chief economist of USDA who cowrote the paper for the Kansas City Fed with Seth Meyer, former chairman of the World Agricultural Outlook Board.

From 2005 to 2015, China’s soybean demand grew at an annual rate of 8.5%, eventually accounting for two-thirds of world trade, but USDA projected in 2018 that growth in China’s soybean consumption would slow to 2.7% a year through 2028.

The trade war with China poses new uncertainties about its demand for oilseeds. The real danger of a prolonged dispute is that it will among other things encourage an expansion of oilseed acreage in South America and spur Brazil to invest more heavily in port facilities and other infrastructure, said Glauber.

Arkansas Sen. John Boozman, who is in line to become the top Republican on the Senate Agriculture Committee in 2021, cautions that ending the trade war could have a somewhat muted impact on commodity prices because of other market factors. 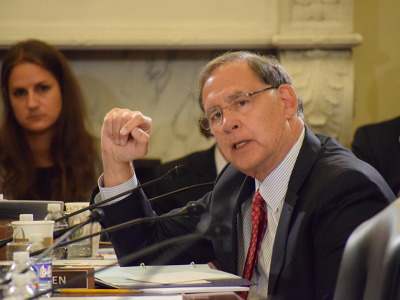 “I do have a concern that producers are getting used to it (trade aid), because at some point” the trade war will end, he said. “I know the administration, and I believe the Chinese at this point, are working hard to come to an agreement. My concern is that once we do that … there’s other problems going on that are going to preclude commodity prices from just jumping back,” Boozman said.

Overproduction is plaguing cotton growers, for example. U.S. cotton exports are expected to be the second highest on record this year despite China's retaliatory tariffs, but U.S. and global production is also up this year and market prices are down about 20% since the beginning of the year.

House Agriculture Chairman Collin Peterson D-Minn., has a different concern. He fears that the administration’s use of the Commodity Credit Corp. to fund the trade assistance will make the account a target of budget cutters.

“You’re going to have troublemakers on both sides potentially, when they find out there is a pot of money that the secretary can use” to make payments to farmers, he said.

After 2010, Republican lawmakers had blocked the Obama administration from using CCC in this way. The restrictions were lifted in 2018 as the administration was threatening the trade war with China. The MFP payments and commodity purchases authorized by the White House are expected to total $28 billion over two years.

Commodity subsidies aren’t the only way that a future Congress could act to shore up the farm economy. The government also could do what it did during the farm economy slump of the 1980s and pay farmers to take land out of production, said Zulauf, the Ohio State economist.

Several presidential candidates, including Massachusetts Sen. Elizabeth Warren, have proposed expanding the Conservation Reserve Program, USDA’s largest set-aside program, which was created by the 1985 farm bill. The candidates emphasize the impact that a bigger CRP would have on reducing greenhouse gas emissions, but expanding it could also push up commodity prices.

Zulauf said a prolonged slump in commodity prices that drives up subsidy costs will inevitably push Congress to consider taking land out of production. "At some number the cost of the programs will become an issue and supply control in whatever form it takes will come back on the table,” he said.